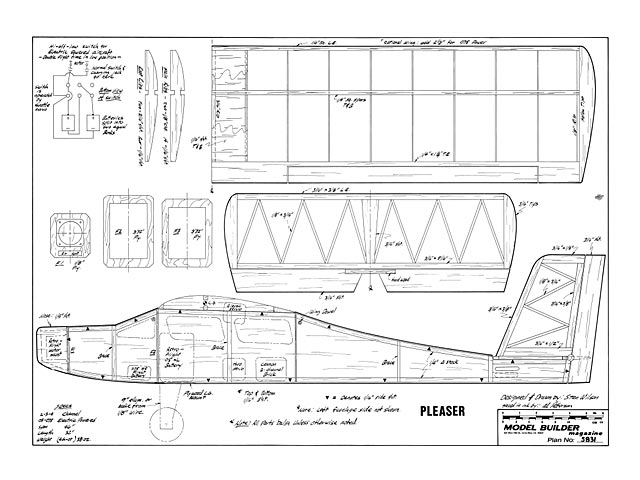 Quote: "Here is a really versatile electric sport plane that can be built in either rudder/elevator or aileron versions with either 05 or 075 electric motors. It builds quickly, too! Pleaser, by Stan Wilson.

As a youngster of 34, I do not remember the excitement that came with the first glow engines. However, I was obsessed with the first stories about flying radio controlled models using electric motors. I started using windshield washer motors and motors from cordless trimmers. I destroyed four of these home-brews before I bought my first Astro 05. I stuffed it in a Super Malibu, and the thrill was worth the effort. My next success was with the Kraft electric Cardinal. I retired it with about 200 flights and several ounces of epoxy. I then built and flew the Astro Sport (oz12092). This is a fine model, but I wanted something that more nearly resembled a real airplane. I have been building and flying rubber scale for over 10 years, and I think that a model should look like a real plane.

I wanted a plane which would be capable of simple stunts, capable of flying in 10 mph wind, and steady enough for relaxed Sunday flying. I searched over 200 magazines for models which had these characteristics. After noting the dimensions of over 20 cabin jobs and about 10 airfoils, I settled down to put them all together. I eventually came up with what I call the Pleaser.

The original model now has over 100 flights using two power plants. I first used the Astro 05XL. This gave very pleasing flights, and was very stable. It would climb to about 300 feet easily, and could perform loops and very slow rolls. I fly with a four-channel, miniature Cannon radio. For all of my flights with the 05, I used coupled rudder/aileron.

After mastering this power plant, I installed my Astro 075. What a performer. It almost jumped out of my hand on the first launch. It climbs to about 300 feet in the first 30 seconds. I have performed multiple loops, rolls, and split-S maneuvers with very little loss in altitude. The only drawback of using the standard 075 is its short motor run (three to four minutes). I cured this with a throttle, which I will explain later. With this throttle, I can climb to the desired altitude, perform a few stunts, then switch to low speed and just putter around the sky for five to seven minutes.

I am currently flying my second Pleaser. With this one, I extended the wing by one bay on each side, which slowed down the glide speed substan-tially. I would not, however, recom-mend the longer wing for use with an 05.

CONSTRUCTION: FUSELAGE: I designed the Pleaser to build very quickly. Cut the sides from hard 1/16 balsa, the firewall from 1/8 plywood, and the other bulkheads from 3/32 plywood. I like rounded corners, so I use 1/4-inch triangle stock for the longerons.

Glue bulkheads two and three to one side at 90 degrees. After this dries, glue the other side to the bulkheads. This forms a rectangular box as both bulk-heads are the same width.

Complete the fuselage by gluing the remaining bottom sheeting and the top sheeting.

Quote: "Hi, Steve and Mary. How are you? I hope all are fine. Today, I send you my latest CAD redraws ...second is the Stan Wilson's "Pleaser" (oz12598). This as a change from my usual redraws, an R/C electric model, instead of the 1/2A C/L models that I usually redraw. The reason for it is because I remembered a short article of this model published in the aeromodelling's supplement from the extinct aviation's spanish magazine 'Flaps', back in 1984.
As usual, I add the vector PDF version and both vectorial CAD formats: DWG and DXF. Plus, I add the copy of the article 'Pleaser' in Spanish.
All the best, from your friend, Valeria367" 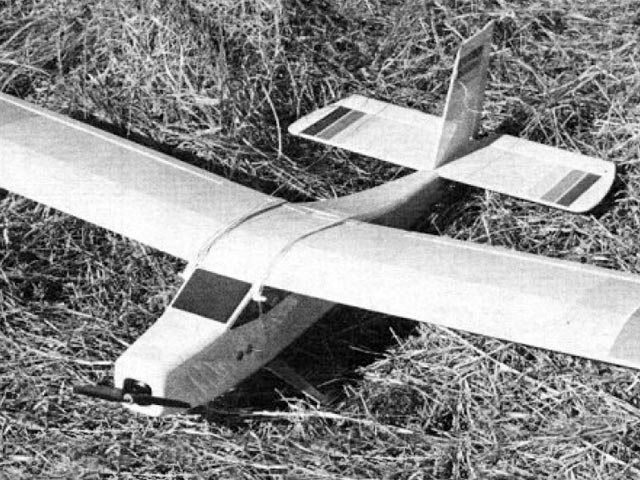