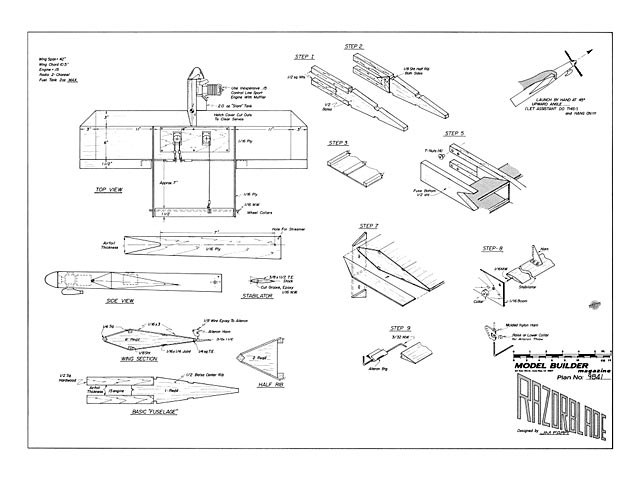 Quote: "Razorblade, for R/C Combat or Sport. By Tim Farr.

Here is an R/C model that was designed from the start for one thing - R/C Combat flying. It is quick to build, it handles very well, and it's cheap! Several 'Razorblades' have been built and flown successfully by members of the Palm Beach Aeronauts, Florida.

COMBAT! There has never been any endeavor creared in the fertile mind of man that has not been contested at some time or another. Someone is always trying to be higher, wider, taller, stronger, faster, slower, or more of something, than anyone else. If you don't believe it, why not try a little experiment the next time you are out driving on the freeway. When you find yourself following another car for awhile that is traveling at the same speed you are, pull over to the left lane and slowly, but ever so slowly, increase your speed so that you just barely creep on by him. Nine times out of ten, if the difference between your speeds is slight enough, you will notice his speed increase just enough to prevent you from passing him without increasing your speed some more. If you do this, and then change lanes back in front of him, not long after that he will pass you again. Try it and see if I'm not right!

What's the point? Well, this model is the point, or at least one result of the point. Back around 1970, several club members and I used to find ourselves flying together at the same time, and started flying in formation with each other. Then, one of us would try to get on the other guys' tail. One thing led to another, and pretty soon we added crepe paper streamers, and it became full-scale combat!

About that same time, there was an article in one of the model magazines concerning R/C combat. I no longer remember who the author was, or which magazine the article appeared in, but the author proposed modifying C/L Combat planes for use with R/C and flying R/C Combat with them.

In order to keep the cost down, he proposed that engines be limited to inexpensive .15-size C/L engines with no throttles, and that the radios be inexpensive two-channel 'glider' radios operating aileron and elevator surfaces only. Because there was to be no throttle, the fuel was to be limited to two ounces.

Needless to say, that article struck a very responsive chord in me, and I set out to find a suitable Combat kit to modify. A preliminary study of all the Combat kits available at the time quickly convinced me that there simply were none that were suitable for conversion to R/C.

Undaunted by this, I just sat down and proceeded to design my own concept of what a super-simple R/C Combat ship should look like. The layout was strictly contemporary Combat: a wing, an engine pod with the engine right up against the leading edge; two thin plywood sheet tail booms glued to the wing; and a long, thin, all-flyingstabilizer (or 'stabilator') pivoting between the booms at the rear..." 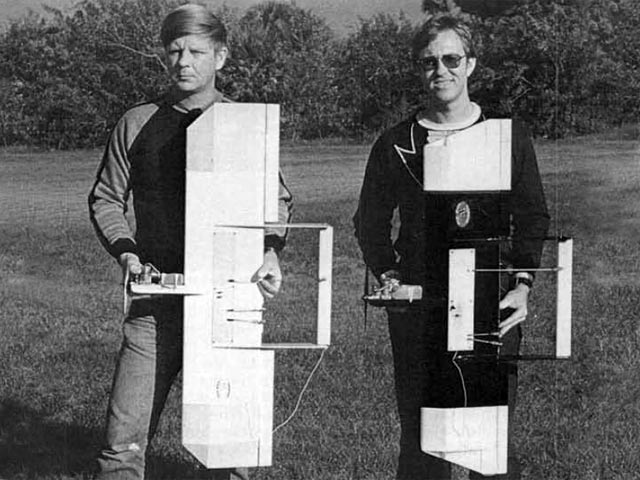