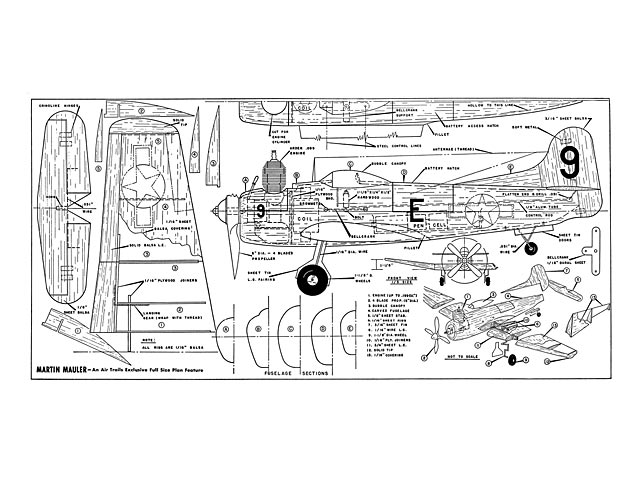 Quote: "THE modern torpedo bomber of today is a far cry from the designs of a decade ago. In the old days it took a three-man crew to operate an 'egg layer' because of the lack of speed and adequate instruments. Today, the Martin Mauler AM-1 requires only a one-man crew to launch the 2,000-pound torpedo or release the alternate load of 4,000 pounds of bombs. Armament also includes four 20-mm cannon as well as several rockets. The necessity of a rear gunner was overcome by making a plane that was as fast as or faster than the defending fighter planes. The Mauler is powered with a 3,000-hp Pratt & Whitney Wasp Major engine which drives the craft at 350 mph. In spite of the high speed, long range (1,700 miles) and high ceiling (30,000 ft) have been obtained. The prototype has a 50-foot span and is 47 feet long.

The designation 'A' for attack is a new one for naval aircraft. Heretofore only Army craft were designated as such. The Mauler, along with the Douglas AD-1 Skyraider are the first attack craft in the US Navy: Torpedo bombing is only a small part of the job these multi-purpose designs must fill. Harassing the enemy with their cannon and multiple rockets plus dive bombing makes the Navy's attack aircraft a very important part of our national defense.

The model is very convenient because of its small size and does not occupy very much storage space. The shortness of the lines allows the model to be flown in a corner lot or even indoors in a gym or armory. Electric ignition engines or diesels of .099 to .199 cu in displacement can power the model. The original model used electric ignition and its performance was quite good with an Arden .099 engine up front. After many hours of flying time the model was overhauled and the ignition units removed. A glow plug Bantam was installed using the Bantam metal tank and the performance proved superb.

The fuselage is carved from a soft balsa block following the sections on the plan, and when sanded smooth is carefully split in half along the horizontal center line. Using an X-acto gouge, hollow the fuselage to about 1/8 in wall thickness. Bulkhead 'B' can be cemented to the lower half at this time if the engine used is radially mounted. In the event that beam mounts are required, omit the bulkhead and install the bearers on the lower half of the fuselage. These should be 1/4 x 1/2 in hardwood. Cut the tail surfaces from 1/8 sheet balsa, sand to a streamline shape and cement firmly to the upper half. Mount the bellcrank on the 1/4 x 1/2 in hardwood support and cement in place on the upper fuselage shell. The control rod can now be installed and connected.

In the event you decide to use electric ignition, the wiring is installed in the lower fuselage shell at this time. A fibre strap is used to hold the coil to the bulkhead; do not use a metal strap. The approximate location of the ignition units is shown on the plan. Solder all connections and test the system.

The wing is made in four sections, two inner panels and two outer. Cut the covering to shape from 1/16 sheet balsa and cement to the ribs. After adding the joiners and landing gear the heavy leading edge can be cemented in place. This member takes the main stress of the wing along with the joiners. When dry the leading edge can be carved to its proper shape and sanded. It will be noted that no trailing edge is used on this model. The inner panels are well cemented to the fuselage and the joiners inserted through the shell and cemented to the inside of the fuselage..." 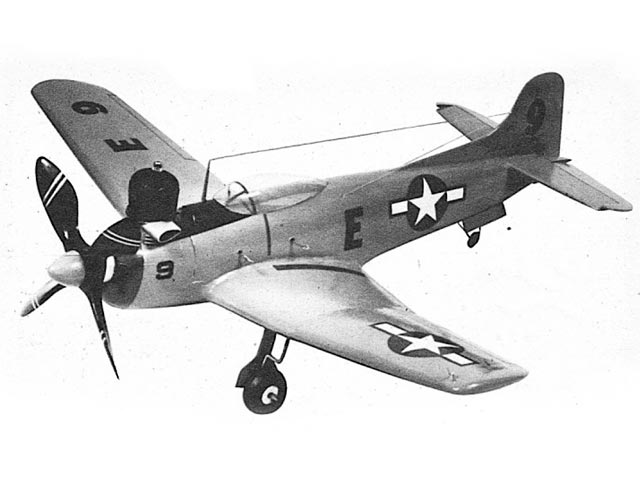