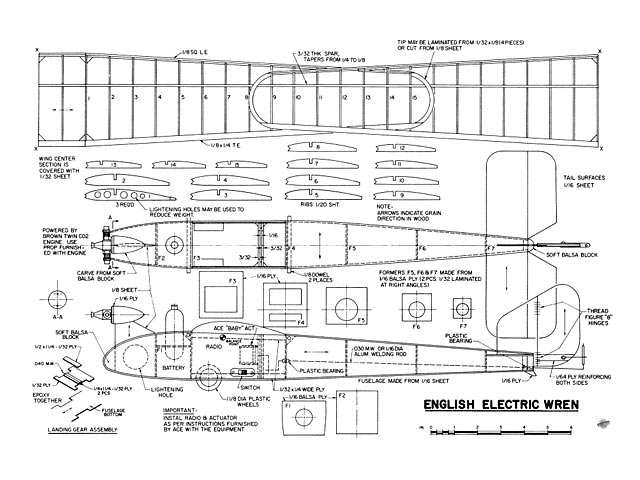 Quote: "Before dinner, just step out the back door, charge the CO2 motor, spin the propeller, and gently launch into a silent backyard R/C flight. English Electric Wren, by John Walker.

AFTER WWI ended in 1918, times were hard and flying expensive. There was great interest in simple, low cost aircraft, even though there were a lot of surplus war planes around, and motor gliders became the 'in' thing. The Electric Wren was one such aircraft. In one competition it took top prize by flying 85.6 miles on one gallon of gasoline - and gas wasn't $1.25 a gallon then!

Two Wrens were built and they varied slightly in construction details. Both were powered by 3.5 ABC motorcycle engines, and weighed about 400 pounds, had a span of 37 feet, and a length of 24 feet 3 inches. The maximum speed was 50 mph in still air.

The first flight was made in 1923. In 1957 one Wren was restored to flying condition and can be seen in the Shuttleworth Trust collection of antique aircraft.

I built the Wren because I wanted an R/C model that could be flown out of the back door without the drawbacks of noise, dirt, smell, and a pilot who reeked of glow fuel and exhaust fumes at the dinner table. All you need to fly the Wren are a fully charged radio battery and a half-dozen CO2 cartridges or a larger CO2 charger. I recommend the latter for consistency of engine runs.

Another advantage of the Wren is that it only takes a minute to charge the engine, turn on the transmitter and receiver, and be flying. Then there is the advantage of flying around, not through, the trees and bushes in the backyard. The neighbors may wonder about you, but so what. They spend every weekend looking for a little white ball on what would make a great flying field and they call us nuts?

The Wren won't break endurance records, but it will provide a great deal of fun. On a good day it can float around for more than ten minutes after the engine runs out.

CONSTRUCTION: The model isn't difficult to construct if you use care. Be sure to build it light. I used the best contest-grade balsa I could find and, except where noted, I used cyanoacrylate glues.

To begin, glue up the 1/16-inch balsa plywood for the fuselage formers and cement two sections of 1/32-inch balsa sheet together with the grain running at right angles. You can use contact cement here.

The fuselage is shown full size on the plans, but it will be slightly shorter when assembled. You may want to use 1/16-inch square balsa to provide a wider adhesive area where the fuselage sides meet the top and bottom sheeting, but I didn't find it necessary.

Make a light cardboard template of the fuselage side. Select two sections of 1/16-inch sheet that are almost identical in weight, grain structure, and 'give,' and lay them edge to edge. Trace the template outline on each section in the same position, one right hand and one left hand.

Locate the former positions and, using a square or drafting angle, draw in vertical lines which will make it easier to locate and position the formers. Do this to both sections. Cement the 1/32 by 1/4-inch ply stiffeners in position at the wing location. Cut the sides to outline shape and sand smooth.

Cement formers 3 and 4 onto one fuselage side. Use a small square or drafting angle to assure they are square. From this point, use conventional sheet construction techniques. Before putting the actuator and its mechanics in the fuselage, read the installation instructions furnished by Ace carefully... " 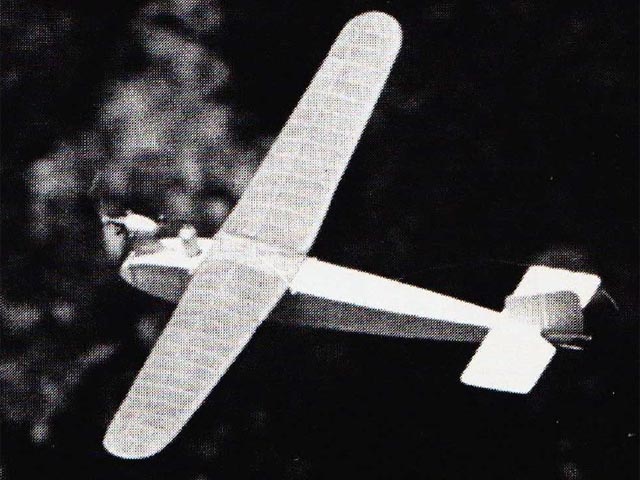