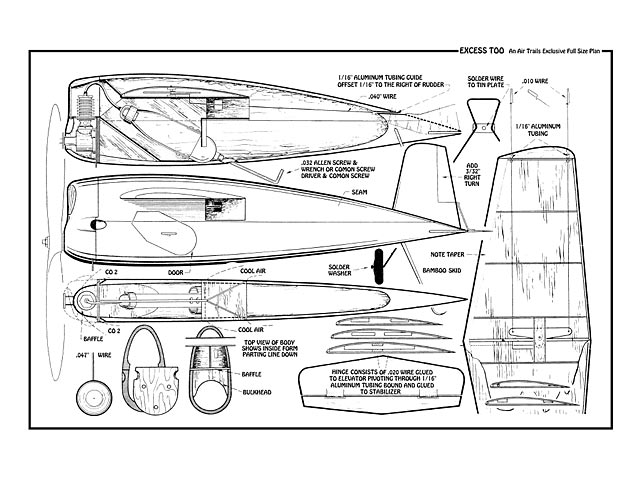 Quote: "THIS little model was built to explore the possibilities of the Herkimer compressed gas engines for U-control use. Not only has the engine proved itself adaptable for U-control but is excellent for indoor work and for flying in restricted spaces. It has been flown in exhibitions with marked success. Those who have flown it have enjoyed the experience as much as the spectators.

When designed, speed was considered rather than stunt or sport flying since it was our intent to use the model as an instrument of research into propeller sizes for this engine. To date the model has clocked 34.7 miles an hour, which could be increased with drop-off gear and additional experimenting with propeller types and sizes.

Before installing the engine and cartridge in the model some tests were performed to determine the advisability of soldering a series of washers on the pressure line from the cartridge holder to the cylinder head. It was found that without the washers the line would frost. After about 75 washers were added to the line there was no frosting of the line, indicating that the washers were absorbing heat from the atmosphere. Since no exact calculations were made for thrust and engine run comparisons it is hard to say for sure that adding washers increases the efficiency of this engine. However, it can be supposed that there is some increased efficiency. Whether the increase in efficiency is sufficient to warrant this added weight is debatable. For this reason the plan shows a short straight line connection between cartridge holder and engine.

The model itself is very easy to construct, the fuselage being carved from two blocks of approximately 6-lb per cubic foot balsa wood glued together lightly at the parting line. The outside contours are carved first and then the blocks are separated at the parting line and the inside carved to the thickness shown on the plans. After the two shells are completely carved and sanded inside they are carefully glued together, with the cartridge holder, baffles and formers cemented in place. The wing and tail are simple structures. It is considered that the plans are self-explanatory.

The landing gear is long and spindly due to the size of the propeller in comparison with the size of the airplane. A drop-off gear or dolly should work very well since the model has a tendency to take off and accelerate very rapidly.

Propellers varying from 7 in diameter and 4 in pitch to propellers 8 in diameter with 8 in pitch have been used. A propeller of 7 in diameter and 8 in pitch seems to give the best all-around performance. It is advisable to use stock gas model propellers of good quality and sand them down to a thin section with a slight amount of undercamber. Much weight can be eliminated and the efficiency increased tremendously. It has also been found that a stock gas model propeller is far too strong and any minor mishap will tend to, damage the ship a great deal, whereas a lighter propeller will absorb shock and break, saving the ship.

The model has been flown on lines 15 and 20 feet in length. For maximum speed .003 Tungsten wire is excellent. However, for general sport flying try fine silk thread, preferably white, since it is more visible, durable, and easy to keep in condition. For safety it is advisable to use new lines for each flying session.

For stunting, this model can be easily converted into a biplane by adding a lower wing and increasing the movable elevator area." 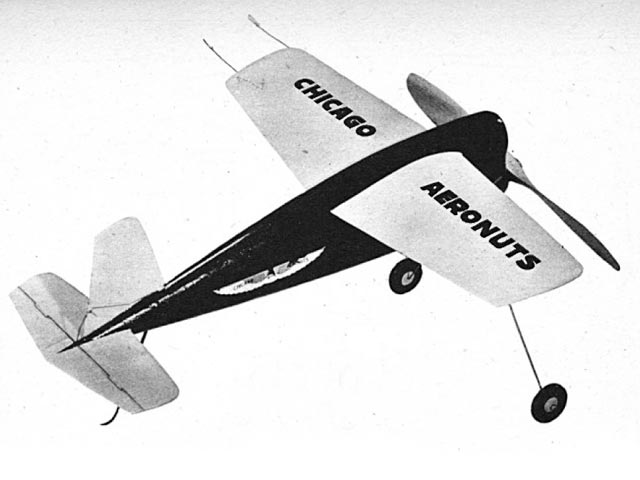