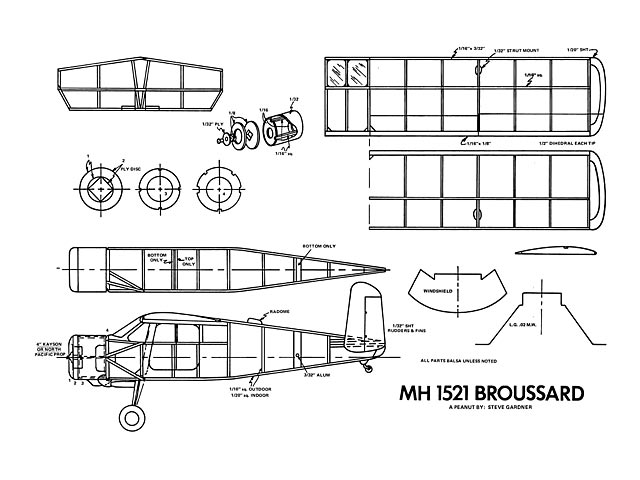 Quote: "The Broussard MH1521 was picked by the author as an ego-pleasing, fun flier, not just another contest Peanut! If you are tired of the same old fare in Peanuts, put a little salt in your diet!

A number of years ago, people built Peanut scale models of all types of full size aircraft, even almost unflyable types, because they wanted a model of 'that' airplane. They would go ahead and build them anyway because even if they didn't fly too well, they would still have a scale model of a plane that they always wanted to build without spending much time or money.

Now you don't see anything but Peanuts of aircraft that have near perfect proportions for rubber scale, that is, at contests you don't. Some people still build models of what they want instead of what will place in a contest. Bill Hannan is a wonderful example. He designs models of whatever he wants to build. Some of his designs fly competitively, others are just for fun. The model presented here is an attempt to capture the same flavor that Mr. Hannan's BD-4 and Aristocrat have. Those Peanuts are tiny-winged delicacies, and they are my idea of what a Peanut should be.

So, if you find time between Lacys to build this model, I hope you like it.

The MH 1521 Broussard was built by a small, French company, Avions Max Holste, between 1952 and 1968. It was, and still is, used by the French army as a utility transport. They have been used to spray crops and carry supplies in several African countries, so a color scheme should be no problem. (Mine is Imaginary French Air Force).

To build this model you might start with the tail surfaces, to get you into the building mood. Use good, firm wood on the twin vertical tails, they take a beating out there on the ends of the horizontal tail.

When building the horizontal tail, please be careful to get the end rib square to the spar. This will keep the fins straight. The wings are very simple, and should give you no problems. Just be certain that you use hard wood for the leading edge, to prevent dents.

When you have it up off the board, then you can add the skylight. Use very thin cellophane for this to keep the weight down.

The fuselage is next. Once again, pick hard wood for the highest stressed part, the longerons. Add the side windows before you cover the fuselage. The cowl is made of balsa which is rolled around a pair of formers which are held together by four keels. Add the front balsa rings to build up wood for the round front. Cut a key to fit the hole in the ply former, and add the balsa nose button and bearing. A Peck Polymers nose bearing worked for me, it helped give me the needed clearance when I added downthrust.

My model was covered with domestic tissue, the only tissue I had in olive green. If you can find it, you will be better off covering a model this small with Japanese tissue instead of the coarser domestic tissue. You might try dyeing white Japanese tissue to get green, or airbrushing it with acrylic artist's paint as I did on the cowling.

After you have it covered, but before you assemble it, add the trim details, and the surface outlines. It is easier to work on the model while it's in pieces than after it's assembled. Paint the struts, windshield frames, and cowling before you add them. Assemble the model very carefully. Alignment of the twin fins is very important.

Balance the model on the spar, adding as much clay as it takes to make it balance. Test glide the model over short grass, if you use long grass, as some of the other articles say, you will not be able to watch the model's flight for very long before the grass gets it. Once you have the glide right, start with about 100 turns on a ten-inch loop of 3/32 rubber and more down-thrust than you think you will need.

This model, because of its small tail, will need a bunch of down-thrust. Let it circle the way it wants to, unless you fly indoors, then you will have to fly it left. Don't expect more than about 30 seconds from this model unless you build it a lot lighter than the plans show.

I hope that after you build this model you like it enough to build more non-contest type models. I think we need to put the spice, er, salt back into Peanut scale." 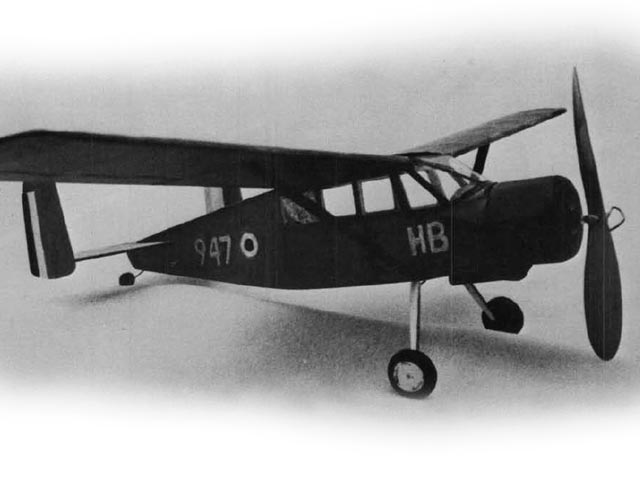