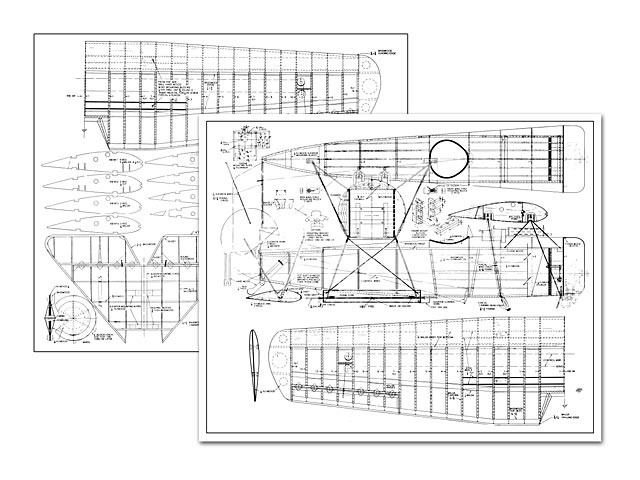 Quote: "The Fokker D-VIII was finally chosen as the aircraft to build. Things worked out right for the D-VIII. It was a monoplane - only one wing to build. No rigging or guy wires existed to complicate building. It was of simple, straightforward construction.

Once the aircraft had been selected, the next step was to select the scale, powerplant, and aerodynamic features that would provide the realistic flight characteristics desired.

The powerplant selection was rather easy since several members had been flying large scale aircraft with Quadras. Many had been purchased because of the Quadra's excellent performance.

Having chosen the powerplant, we could then determine the scale size to best utilize its power. Our experience with large scale aircraft indicated that a power loading of one horsepower per 750 square inches would give the desired results if the wing loading could be kept to about 1.5 pounds per square foot.

These values worked well with a selected scale of one foot to one meter, or a 3/10 scale. At this scale the wingspan would be 100 inches and the wing area 1,572 square inches. An additional area of 180 square inches would also be available in the underplane, giving a total of 1,752 square inches or 12.17 square feet. Thus, an estimated weight of 18.25 pounds could be tolerated.

The airfoil was a special matter. Most D-Vllls we had seen exhibited a wing-snapping tendency and we wanted to avoid this; therefore, the selection centered on what would give the correct stall characteristics. Using NASA airfoil report 824 as a guide and our experience as a background, a NASA 4420 set at 0° incidence was chosen for the center airfoil. A Ritz 23012 set at -2° incidence was selected for the tip airfoil. The ribs between were a modification of both. The washout was used to help reduce any tip-stalling tendency. The underplane airfoil was NASA 4420 set at 0° incidence, the same as the main wing center-section.

The technical problems were easier to cope with than the hardware problems. With the project starting late in the season, communication with many members became a dilemma since we met only once a month when flying ceased because of the oncoming winter season. A partial solution evolved when several STARS enrolled in an evening adult education class in woodworking, sponsored by the Bradford Area School District in Pennsylvania. By coincidence, one member of the STARS was the woodworking instructor and another was the machine shop instructor. The woodworking class was used as a central point in the cutting and forming of most of the pieces in kitting the Fokker D-VIII. Several members took their work home to fabricate other parts.

The drawings were made by two of the STARS membership, draftsmen by profession. They probably had the most demanding role in the project. Without their efforts, which took much more extra time and energy, the project would not have been started.

It is unknown at this time how many Fokker D-Vllls will someday be completed but at least eleven were started in this project. And the STARS will be building them for years to come.

THE CONSTRUCTION OF this ship is fairly straightforward, and should pose no serious difficulties for the experienced builder, especially if he is old enough (ie, over 40) to remember the 'good old days' of modeling when open framework construction, rather than liberal doses of balsa sheeting, was the order of the day. The one thing to remember is that this is a BIG model, and requires a considerable expanse of building area.

WING: The only really complicated construction feature is the wing, and this is no real problem if the building sequence shown on the plans is followed carefully. The first step is to construct the wing jig, as per the plans. Next, the wing is built in one piece - upside down - on the plans with the wing jig placed so that the upper spar will rest on the jig as the ribs are slipped into position. In this way, the proper washout and dihedral are established as the wing is constructed. The only dihedral, by the way, comes from the change in airfoil thickness from root to tip. The third step is to add the leading and trailing edges, plus the wing tips. The ailerons are cut out and hinged after the wing has been completed.

After the wing has been constructed, the aileron controls should be added. The servos - ideally there should be one per aileron on a plane of this size - should be placed as close to the ailerons as possible, in order to reduce stress loads on the servos. On the other hand, if you wish to go the scale route with the control system, an arrangement of pulleys could be worked out, as per the prototype, with the aileron servos in the fuselage. This is strictly up to you, the builder.

Since the original had plywood-covered wings, you may wish to sheet the wings, either with a thin veneer, available from most building supply stores, or with balsa. In either case, you should be advised that this could be an expensive proposition, since there is a lot of wing area to cover. Furthermore, the sheet covering should be held off until the very last, in order to facilitate strut mounting, control installation, etc. Also, there should be some means for allowing access to the servos.

FUSELAGE: You should begin the open framework style of construction with the two sides, making sure that you build a right side and a left side, so that the L-shaped longerons are properly located. After the sides have been constructed, they should be positioned on edge upside down on the top view of the fuselage so that the front crossbraces and bulkheads from the firewall to the cockpit can be glued at the proper places. Make sure that everything is square and let this dry before proceeding further.

Once the front of the fuselage is dry, you can add the crossbraces behind the cockpit, working back to the tail post, again making sure that everything is square. The basic fuselage box is now completed, and you can add the engine mounts, the side formers for the fairing behind the firewall, and the top formers for the turtledeck. Finally, the internal bracing can be added, plus the servo mounts and the sheeting behind the firewall to the cockpit.

One final point on the fuselage construction should be noted. It is designed to take the Quadra engine. If you plan to use a different engine, the firewall will have to be modified accordingly... " 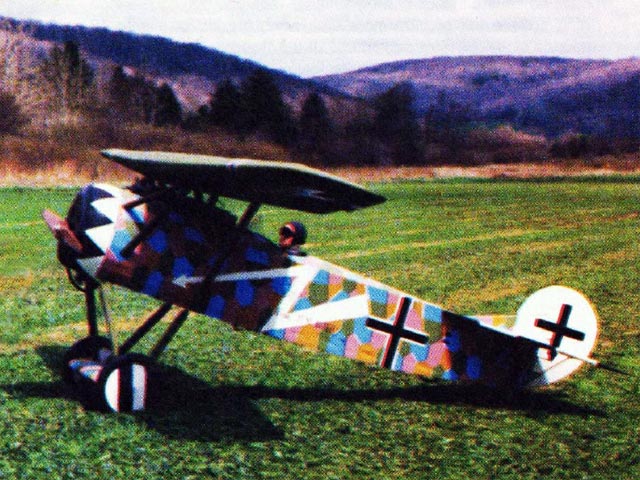