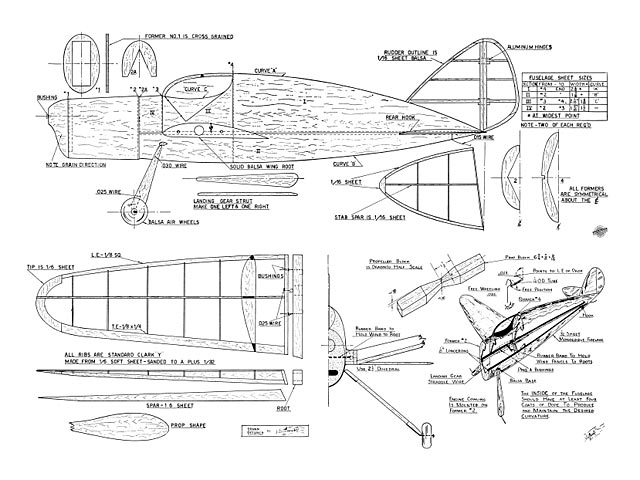 Since you fellows are probably still talking about the National Air Races, we figgered that it might be in keeping with the times to present a rubber craft to you that's a blue-streak right from the workbench of that top-notch builder, Joe Osterman. These pictures, plans, and instructions prove that his snappy contest racer has looks, has speed - and can really 'take it.' So get set, modelers, because here we come blasting down the runway!

MODERN in every respect, with a tapered mid-wing, an 'in-line' power plant, a celluloid canopy, and ever so racy lines, the Mid-Wing Speedster is a splendid ship for you modelers who go in for looks as well as top-notch flights.

The ship is fast and has excellent climbing qualities, zipping up to 200 feet in just a few seconds. Even with her speed, however, the model is very stable. And as you can see from the accompanying pictures, it presents a sleek enough appearance to satisfy even the most discriminating modelers. Moreover, being quite small, the Speedster will hardly bust the bank of the modelers who plan to construct it. There's nothing difficult about building this job, but just the same we recommend that special care be taken to insure that everything is done right.

The rugged structure of the plane has passed many rigid tests, inasmuch as the original Speedster was built over a year ago. Flown constantly during this time, the craft has yet to meet with a serious mishap or crack-up. It has always delivered top-flight performances. And if your Speedster is built according to the plans, it will equal the flyability of the original model. So let's start the construction of this unique ship.

BUILDING THE FUSELAGE: You will notice that the body is covered with sheet balsa, through which type of design we hope to speed up construction and do away with the crooked fuselage that sometimes results from built-up sides. But it is very important to use sheets of balsa of equal strength and thickness for this covering. As you can see from the plans, this is about the closest that one can get to the true monocoque fuselage. All we have are two formers, two stringers, and a sheet balsa shell.

The body is covered with four sheets of medium balsa, as indicated on Plate 1 of our plans. Try to get sheets of similar hardness and grain structure for the covering job. Also, be sure that they have the same bending quality.

Using the sizes and curves, as noted in the table on Plate 2, cut the balsa sheets to shape. Then put two or three heavy coats of dope on the inside of these sheets and place them aside to dry. And while waiting for the dope to completely dry, cut the longerons to size. Incidentally, now that you're ready to cut the formers, strive for a high degree of accuracy or trouble may arise when you attempt to assemble the shell.

The balsa sheet sides should be dry by now, so take the two pieces for the bottom and glue and pin their curved edges together. When dry, cement the longerons in place, adding temporary cross braces about every two inches or so. Now put former No.4 in position, also the rear hook. And remember, fellows, use four or five coats of cement to anchor that hook!

Now cut those temporary braces out of there, and repeat the process for the top. Easy, eh? Well, the engine cowl is just as easy.

LANDING GEAR, WING, AND TAIL: I always like to get the LG on as soon as the body is finished, so she can stand on her own 'pins' as they do in the factories. And if you're gonna string along with me, I'm gonna explain it my way.

Begin by cementing the wire straddle securely to the fuselage, as indicated on Plate 4. Cement the legs to the wire. Then, after the glue has hardened, mount the model on a pair of 1 inch wheels.

For the wing, cut the ribs to a rough shape, sanding to the correct airfoil after pinning them together. Notch for the leading edge and spar and smooth with fine grade sand-paper.

To build the wing, pin the spars in place and then cement the ribs in their proper posi-tions. Shape the leading and trailing edges with a sharp knife or razor blade, finish off with fine sanding, and then glue the strips to the front and back of the ribs. Trace the wing tips onto a sheet of balsa - the size of which is indicated on the plans - and carve to shape.

The wing roots are made from soft balsa blocks. To get the blocks fitting snugly to the fuselage after they have been roughly hewn to shape, wrap a piece of sand-paper around the section of the fuselage where the roots are attached. Then, with very short strokes, sand the roots to shape. Incidentally, it is very important that you use short strokes or the curve variation of the body will be too great and the root will not acquire the proper shape. And for heaven's sake be careful when you sand that root with your swell fuselage!

Do not mount the wing roots to the body until you have determined the CG position exactly. Remember, the wings are removable but not movable ! The CG is located, as shown, after complete construction, covering, and decoration are finished. And be careful of the incidence setting, being sure that there is between 3 and 5 degrees difference between the wing and stabilizer. With this CG and incidence, little trouble should be experienced with the glide. Power control, as you know, can easily be obtained with adjustment of the thrust line. But let's let that wait until later.

TAIL AND PROP: The leading edge of the stabilizer is made of 1/16 sheet balsa and the trailing edge is also constructed from a 1/16 sheet. All wood used in the tail, by the way, should be hard balsa. Aluminum hinges are used to join the rudder to the stabilizer. To assemble the unit, the procedure followed in the construction of the wing is again used. The leading edge and trailing edges of the stab are rounded off with sandpaper and shaped to a smooth airfoil cross-section. Continue the same working-order with the movable rudder, and then assemble, after covering, with the aluminum hinges.

The rudder is formed completely from 1/16" sheet hard balsa. Build in the same fashion as the stabilizer and then place a flat, heavy object on the unit while the cement hardens.

The prop is carved from a block of hard balsa, 6-3/4 by 7/8 by 9/16. If the builder desires, he may use a one-bladed prop of the required size instead of carving one. However, it is unimportant as to which the modeler decides to use as the original ship has been successfully flown both with a one-blader and the standard screw.

COVERING AND PAINTING: Using any color scheme desired, the builder may now cover the wings and tail surfaces with Japanese tissue. The paper is attached to the framework with clear dope. And when covered, the surfaces should be sprayed with water to stretch the tissue tight. Pig-mented dope may be used if the craft has been covered with white tissue. The original Speedster was covered with bright yellow wings and tail and painted black at the roots. A silver nose-cowl and a light brown fuselage with white numbers will really make your ship different, too. The stripe along the sides of the fuselage is black. (See photographs for marking details.)

For finishing touches, use black paint to decorate around the celluloid canopy, the edges of the tail surfaces, and the air intake in the front of the nose-cowl. Also, the model will have that 'sportsman ship' appearance if you very carefully put your initials in India ink right below the canopy. You know, it makes it look as if it's your own private ship.

FLYING THE CRAFT: Eight strands of 1/8 in flat or four strands of 3/16 flat, brown rubber are used to power the ship. Before attempting to fly the model, however, glide it to make sure that it is balanced perfectly. And give the right wing a degree or two more incidence than the left one.

When a long, flat glide has been achieved, the model may be hand launched and flown under its own power. In this initial power flight, the prop is cranked by hand about one hundred turns. Set the trailing edge of the rudder slightly to the left to offset any torque action.

After all adjustments have been made and the ship performs satisfac-torily, permit the Speedster to take-off under its own power. But remember to point the nose into the wind during each take-off and you'll have many happy hours of flying ahead of you.

Even though we said that eight strands of rubber would be sufficient, it might be a good bet to increase that number to ten or twelve - that is, if you'd like to have top-notch flights. The construction of the Speedster is rugged enough to take plenty of turns, too, so don't be afraid to really pack 'em in. However, rubber has a bad habit of breaking when there's too much tension on it, so don't try to wind it too tightly.

Guess that's all. Can't think of any-thing else that you'll want to know about the Speedster, so happy flights, mates!" 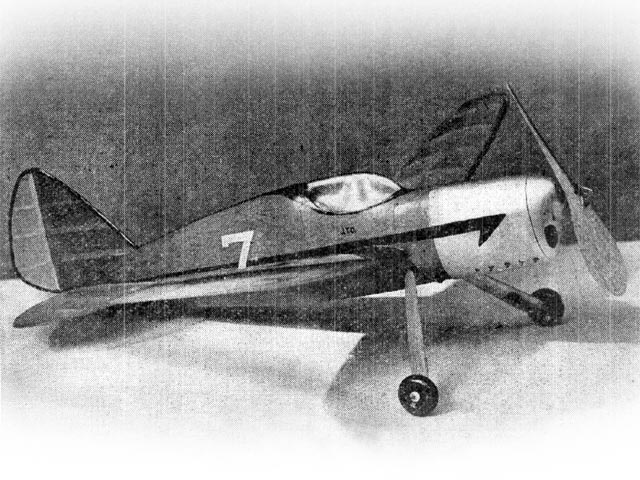