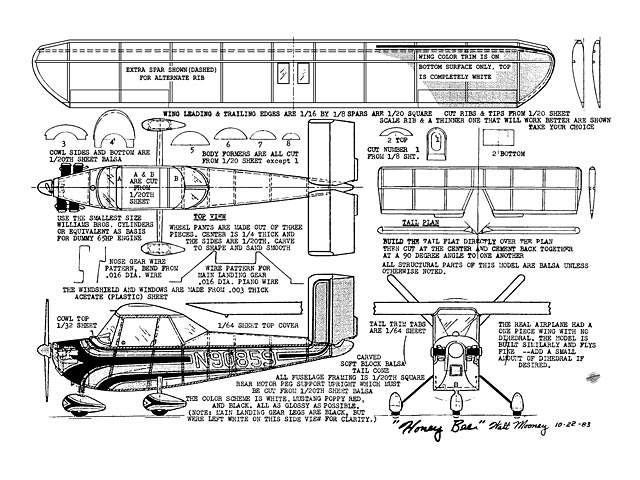 Quote: "Honey Bee, by Walt Mooney. Peanut purists will perk up when they peruse the plans for this perfectly scale Peanut Honey Bee, a certificated homebuilt designed by the author!

The real Honey Bee was built in 1952 and was certificated on December 17, 1953. A small group of people, including Ken Coward, Bill Chana, Carole Mooney, Dean Morehead, and myself did the entire design and construction of the prototype. Because the 'homebuilt airplane' movement had not started at the beginning of the Honey Bee project, the CAA insisted that it could not be flown continuously on an experimental basis. We were therefore forced to obtain an approved type certificate for the airplane. After passing all the required tests we were awarded the certificate on the 50th anniversary of the Wright Brother's first flight in a powered, heavier than air machine.

The real airplane was flown by more than 200 pilots during its flying lifetime and for about 2000 hours. I flew it for the first time when I had only 11 hours of power time in my log book and eventually put about 1000 hours on the airplane myself before I retired it to the Experimental Aircraft Association museum in Hales Corners, Wisconsin. The Honey Bee was awarded the most outstanding new design award at the 1955 EAA Fly-In in Milwaukee.

So, it really is surprising that it has taken this long for me to design and build a Peanut Scale model of the Honey Bee.

An accurate three-view of this aircraft has been provided for those who would demand documentation. It depicts the aircraft as it was painted in the summer of 1966. The wheel pant trim was tape, and has mostly come off the wheel pants, so the museum does not have the Honey Bee currently on display with this color scheme.

The airplane has had several color schemes over the years. Color demarcation lines were in about the same locations relative to top and bottom coloration. The original color scheme was mostly silver on the bottom, white on top, with a red horizontal separation line where the top black line is shown, but running from the engine cylinders to the end of the tail cone. The numbers were black on the top of the right wing and the bottom of the left wing. Two-inch black numbers were on the fuselage just ahead of the tail above the red stripe. A Honey Bee signature about like that on the model plane title was on the turtledeck aft of the cockpit about eight inches tall. It was red with black shadowing.

The second color scheme painted all the silver areas orange, the red stripe black, and put vertical black numbers where the slanted white numbers are now on the fuselage sides. The wing numbers were painted out. The Honey Bee logo was repainted with orange lettering shadowed in black. The landing gear legs were orange.

The Honey Bee did not acquire wheel pants until just before it acquired its final color scheme. They gave the airplane a speed increase (at the same power setting) of seven miles per hour.

Maximum speed of the Honey Bee was 113 mph at sea level. Its best rate of climb was 960 feet per minute. Its range was about 700 miles. Its absolute ceiling, as extrapolated from a saw-tooth climb test, was 23,000 feet. It was actually flown to a little over 19,000 feet and on many cross country flights I cruised it at 13,500 feet.

It was lovely flying aircraft - so why wasn't a Peanut built earlier? Well, it has a high aspect ratio wing and that results in a fairly small Peanut. It must be kept quite light. I've tried to design most of these little Peanuts with wood sizes of 1/16th square or larger so the beginners would find them easier to handle. To fly adequately, this model needs to be built with thinner wood parts. The sticks on the plans are 1/20th square instead of 1/16th. Even thinner wood sections would result in a still lighter model.

The airfoil section used on the full-sized aircraft was the NACA 4418. At full-size Reynolds numbers this is a very good airfoil. However, at the Reynolds numbers obtained by Peanut Scale models, it is rather poor, especially if it is built smoothly. A thinner, multi-spar wing rib is suggested if efficient model flying is your aim.

There is nothing about the structure of this model that requires comment if you have been following Model Builder's Peanut articles. If this is to be your first attempt, I suggest that you get several back issues and read the Peanut articles that describe structure assembly.

The depiction of the color scheme is what needs to be described most. The entire model is first covered with white tissue. This is water shrunk and then given one or two coats of dope to seal the tissue.

All of the color detail was put on using red and black tissue. The tissue is cut out to the proper shape using a very sharp razor blade.

First, get ten or twenty layers of newspaper or, if possible, an old phone book. This will be used for your cutting surface. Now, tape down two layers of black tissue. Trace the outlines of the black trim on a piece of vellum and tape this over the black tissue. Now, using the sharp razor blade, carefully cut all the way around the color outlines making sure that your cut goes clear through both layers of tissue. Cutting into the newspaper a ways will insure this. Next, remove the color cutouts. Position them very carefully on the white tissue covering and dope them in place with thin dope. This is a relatively complex color scheme and careful positioning is very essential. When tracing the color outlines, the areas that go over the top of the engine cowl will have to be estimated, on all other areas the plan is correct enough to be used as it is drawn.

Do the same procedure with the red tissue color pattern. The white numbers can be done in one of two ways. One way is to cut them out of the red tissue trim before it is doped in place. The other way is to ignore them and have continuous red trim in the area of the numbers and then cut them out of opaque white paper and add them over the trim. On the model in the pictures, it was done this way using 'stickyback' paper. After sticking them in place, they were given one coat of dope.

Paper color trim cut out this way generally gives much sharper color edges than can be obtained with paint. On the model in the photographs, the black on the wheel pants was applied using tissue. The red was applied using a red felt pen. The control surface outlines were depicted using a fine black felt pen on the upper surfaces and a thicker one to depict the control surface gap on the lower side.

The two windows on the top of the wing were depicted with black tissue.

Expect the color trim to take about as much time as building the rest of the model. It’s tedious, but it is sure worth the effort when you get done.

This model should balance at the wing spar. It will fly on an eight-inch loop of 3/32nd rubber."

Quote: "The Honey Bee, in peanut scale, by Walt Mooney from the April, 1984 issue of Model Builder. This is based on Mooney's own Honey Bee (which he also designed and built) and bears his registration number. Surprisingly, considering the source, the plan contained too many inaccuracies to catalogue and necessitated a complete redraw of the wing and parts of the fuselage and V-tail. Many of the modifications are based on the original 1951 three-view of the aircraft from Bee Aviation Associates. I have also taken the liberty of adding the extra spar, for the alternate rib pattern, and explanatory notes where necessary. Regards" 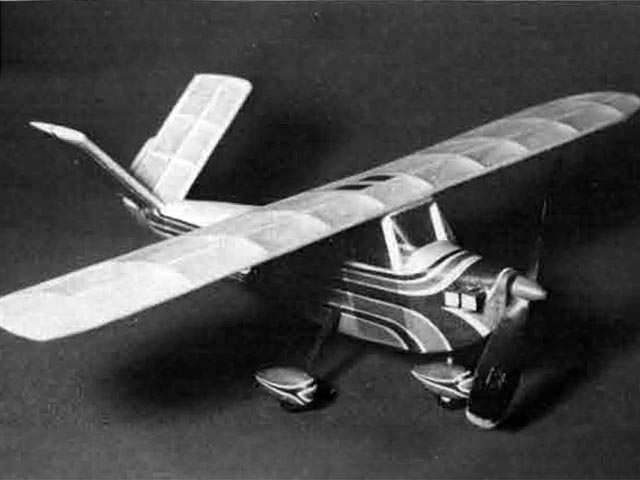 A model of a real plane that looks like a model. That's so much circularity that I'm surprised this is a FF model and not CL!
Miguel - 05/11/2020
If you think that looks like a model of a model, take a look at another of Walt Mooney's creations, the WeeBee https://en.wikipedia.org/wiki/Beecraft_Wee_Bee and the homepage of Mooney's company, Bee Aviation Associates https://fraseraerotechnologycompany.com/Bee_Aviation_Associates.html. Has more pictures of the WeeBee as well as the Honey Bee, Queen Bee, Walt Mooney and Walt's wife, standing next to the Honey Bee.
Jan Novick - 07/11/2020
Thanks Jan, I wasn't aware of Bee Av Associates, I'd approach their products with disquiet and extensive and severe dieting :-))
Miguel - 08/11/2020
Add a comment