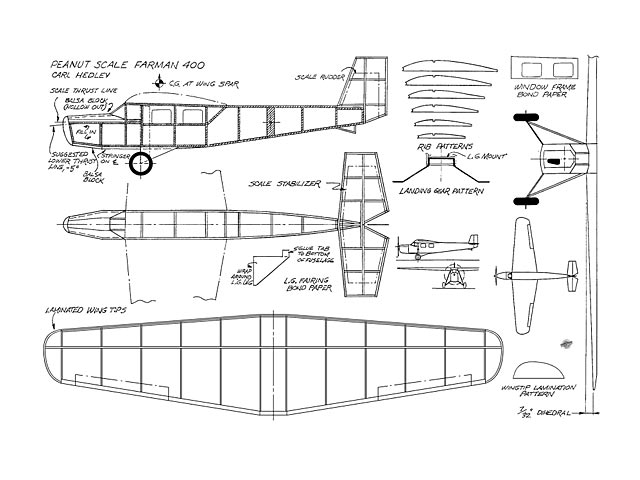 The Farman F.400 was a three-place touring airplane of all wood construction powered by a 120-horsepower inverted four-cylinder Renault motor. The simple slab sided fuselage is easy to build. The tapered wing makes it look good and has a decent amount of area. The nose and tail moment arms are about right. It's a good subject for peanut scale - obscure enough to be a novelty, easy to construct and a good flier. What's not to like?

The plans, as presented, should hopefully cover any questions on construction. The top of the nose cowling is a balsa block, carved and sanded to shape. Be sure the inside is hollowed out enough for prop hook and rubber motor clearance. It is recommended to lower the thrust line slightly for more clearance and to add some downthrust (about five degrees).

The only things a novice modeler might find unusual are the laminated wing tips. They are made from three layers of 1/20 x 1/64 balsa soaked in water and bent around a cardboard form. They are pinned down and left to dry overnight, after which they are glued together and pinned to the wing pattern. Bending wood like this takes a little more effort, but the resulting structure is light and strong.
You may have noticed that the stabilizer is a standard split tailed type. Such stabilizers are weak and can be easily broken. In order to beef it up, an extra piece of 1/20 square was added through the center at the main spar. The small amount of extra weight is weight well spent in increasing durability.

An easy way to cut out the wing ribs is to make a dry Xerox copy of the rib patterns, place the copy face down on your rib stock (1/32 quarter grain balsa) and iron the rib patterns onto the wood. Use a low heat setting to avoid scorching anything. Lift up the paper and voila - the rib patterns are on the wood, ready to be cut out.

The model was built with 1/20 square sticks throughout (1/20 x 1/10 for the wing trailing edge). With Japanese tissue lightly doped, a rather sparse amount of detail and a small amount of clay ballast in the nose, it weighs in at seven grams. After some experimentation, the best propeller used so far is a four-inch black plastic Kayson prop cut down to a size which will allow the model to ROG. On the prototype this works out to 3-9/16 inch diameter. This is not much of a prop and if you elect to hand launch or lengthen the landing gear, a larger one could certainly be used. The model is still new and in the process of being trimmed, with a high flight time so far of 33.5 seconds. This was at an indoor site with a 27 ft ceiling. A larger prop would improve flight time, but in the Miama club where I fly, we are allowed a ten second bonus for ROG.

The scale information used on this project appeared in the Hangar Pilot a few issues ago. It consists of a three-view and photo which does not show much detail, but at least proves the real airplane did exist. The color of the plane appears to be light. The registrations for some F.400s, according to Bill Hannan, are F-AMOA, F-AMXM, F-AMGY and F-AMHV (Thanks, Bill.) In a feeble attempt at a pun, the model is registered as F-OIBL. Fortunately for peanuts, scale documentation is not as demanding as other scale classes, and the three-view on the plan should suffice.

Originally, the model had a rudder with an area about halfway between the scale rudder and the one shown on the plan. It was not enough to give directional stability and had to be enlarged. The model flies well with the rudder presented. Apart from that and experimenting with props, trimming the model has been straightforward. Not much power is needed, the Farman being aerodynamically clean. If yours is in the neighborhood of seven grams, start with a loop of 1/16 FAI or Pirelli rubber. The prototype flies to the left and needed a small amount of clay in the nose. A tad of washout (less than 1/16 at the tips) was put in each wing.

In doing this project I would like to thank an unknown French publication (L'Aerophile, February 1933) for the three-view, Alain Parametier for sending it to Doc Martin, and Doc, for putting it in the Hangar Pilot. Thanks also to my friend Harvey Reinsma, a professional photographer, for taking some great pictures. Good luck with your Farman and happy landings."

Quote: "Farman F.400 by Carl Hedley from the December, 1989 issue of Model Builder. Besides a general cleanup, modifications to the original plan include completely new drawings of the wing and wing tip lamination pattern, adjustment of all ribs for length and spar position, equalization of the horizontal stabilizer and the addition of the landing gear strut outline to the side view. Sounds like a lot of work for such a simple plan but it pays off when the time comes to build it." 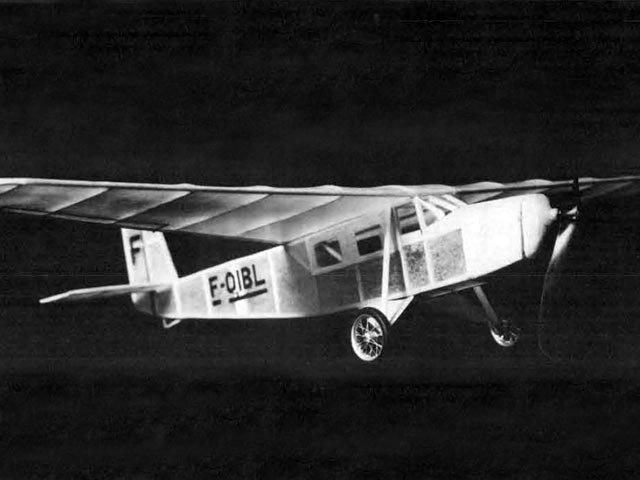