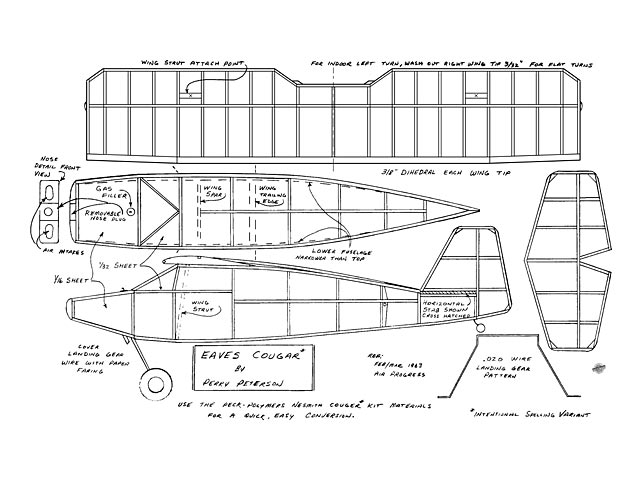 Quote: "Here's a swell-flying Peanut model of a home-built plane from the 50s. Outdoors it won a trophy at the AMA Nats.

In 1958 Leonard and Rita Eaves, of Oklahoma City, completed construction of their beautiful Cougar home-built two-place aircraft which they called 'Chigger'. The cowl on their bright red Cougar was more streamlined than most of the other Cougars built during that time. Mr Eaves accomplished this by moving the induction system to the rear of the 85 hp engine.

The appearance of this plane is a welcome change from the dozens of square flat-nosed Cougars usually found at most peanut scale contests.

During the spring of 1981, while looking for an easy-to-build GF (guaranteed flyer) for upcoming Nebraska Freeflighters contests, I came across a color picture of a Chigger. One look was all I needed. Although I drew up the plans right then, construction was delayed due to the preparation for my daughter, Teri's, wedding which was scheduled for the same day as our next contest.

Construction was completed the night before the contest. I arrived at the National Guard Armory as soon as it opened the next morning. After putting up three test flights, I called for a timer, put up three official flights, and then rushed off to the church in time for the wedding. That night, CD Bob Willey called to say my little red Cougar had garnered a trophy. Since then it has rewarded me with many other awards including a NATS trophy (second place Outdoor Peanut).

The model still flies well even though I don't take it out much anymore. It is no longer possible for me to travel around to contests like I did there for a short while. At the time these photos were taken the plane was starting to show some of the wear and tear of the 130 flights it has logged. I'll always be proud of it. It has been an excellent campaigner, flying in competition at eight different indoor flying sites in five cities including the legendary West Baden, Indiana site.

This could be an easy Peck Polymers kit conversion, so I will not be giving you construction details. Those of you who may need detailed construction information will probably start out with the fine Peck kit anyway. Now, after that cop-out, let's get into flying.

My model was built for an indoor contest and, since it turned out heavy (12-1/2 grams), was trimmed to fly to the left to keep from flying through the ceiling, with all the power required to keep a heavy model up for a respectable amount of duration. If you build light enough, a right pattern will probably be fine. I have found that my heavy models gain too much height when flown to the right indoors.

I kept the left wing warp free. The right wing started with 1/16 of an inch of washout which increased on its own to more like 1/8 of an inch. The flat left wing and washed out (training edge higher than the leading edge at the wing tip) right wing keeps the plane turning in nice flat circles. The only time it banks to the left is during the first three of four seconds of the power burst.

The amount of power your Cougar requires will depend on many things including the brand and condition of your rubber. Where you live will also make a difference. Your local relative humidity and height above sea level can also be factors to determine the amount of rubber needed.

For flying indoors, I used one loop of 3/32 FAI rubber 18 to 24 inches long. The exact length was determined at the flying site by testing. After the length was selected, just enough winds were used to get the model to almost scrape the ceiling.

This is a model that should reward you with many fine flights, many favorable comments and, hopefully, many contest awards. Best of all, it will be as easy as building from the very excellent Peck Polymers kit."

Eaves Cougar, plan by Perry Peterson from the January, 1988 issue of Model Builder. The aircraft is basically a Nesmith Cougar with a modified cowl. Changes from the original plan include a completely new drawing of the wing, with the spar relocated to match the rib profile and the trailing edge width increased from 1/16" to 5/32". 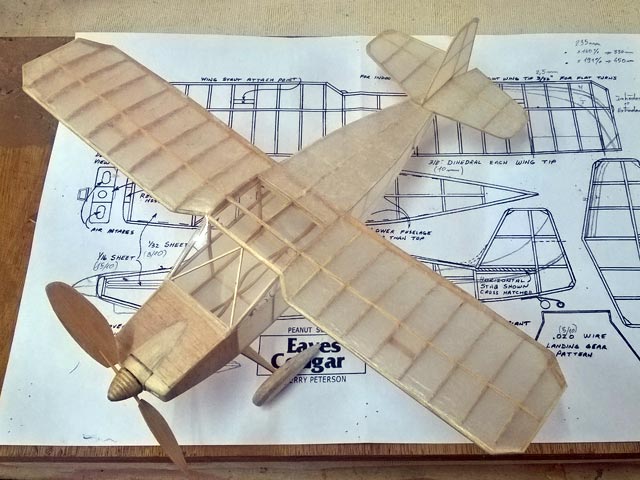 Hi Steve and Mary, What a pleasant surprise! I've just discovered the plan on your site this morning. I've build this peanut during the first 2020 lockdown in France (March 17th to May 11th). Few pictures are attached [main pic, 005,006]. Not yet balanced, but will be flown when sports hall will reopen. Slightly modified to approach the N42KD Nesmith Cougar shapes (wheel pants, wingtips, cowl and nosecone). Colors will be applied after trimming...
Best regards,
Yannick - 31/10/2020
Beautiful construction, Yannick! Here's hoping it flies as well as it looks!
Jan Novick - 31/10/2020
Add a comment