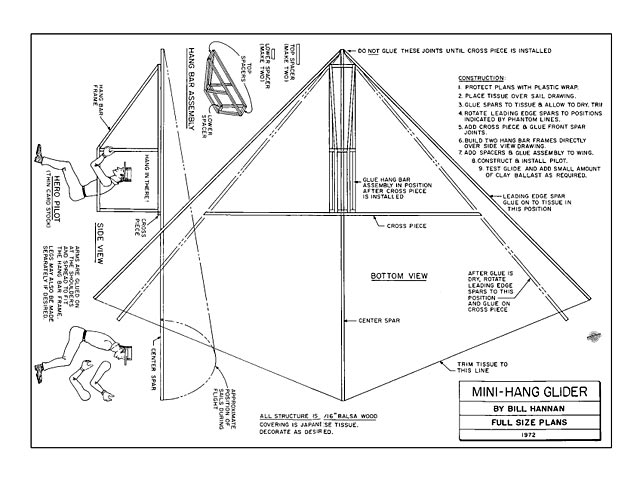 Quote: "Build this mini Hang-Glider. Drop it from a high place and watch how far it flies. By Bill Hannan.

Here's a chance to construct your own miniature hang-glider, similar to those now being flown in many parts of the world. This design is of the Rogallo type, and performs best when dropped from a high place, rather than thrown like a conventional glider. If launched from a porch or hill, it is capable of surprisingly long flights.

The model can be quickly built from scraps of material you probably already have, so let's start right in: Tape or pin the full-size plans to your building board, and cover them with a sheet of plastic wrap. Next place a piece of Japanese tissue paper over the plan, and tape it down at the corners to hold it smoothly in place. You should still be able to see the drawing through the tissue. Cut the three 1/16 square wing spars to size, and glue them directly to the tissue in the positions shown. Those of you who have built Delta Darts before will be familiar with this system. Be careful not to get too much glue on the sticks, which may be held in place with pins or weights while they are drying. Note that glue is not applied to the point where the three sticks meet!

After the sticks have dried, carefully remove the assembly from your building board. It should be possible to gradually peel the plastic wrap off the tissue, if the glue has adhered slightly. Next, cut the 1/16 square cross-piece to length, swing the leading edge wing spars slightly together, and glue the cross-piece in place, using the plan as a location guide. This will cause the tissue to go slack, which is intentional. Glue the cross-piece only to the three spars, not to the tissue paper. Now you can apply a drop of glue to the front where the three spars meet. Next, construct one "hang bar" frame from 1/16 square, directly over the plan, using pins to hold the pieces while the glue dries. After removing the completed frame, build a second one just like it. When both are dry, add the top and lower spacers to complete the assembly, which then can be glued beneath the wing spars. Add the short spacers to complete the assembly.

Pilot: Although the model could be flown without the pilot, why not take the time to make one for added realism? He can be cut from heavy paper or thin cardboard, such as postcard or 3 x 5 inch index card stock. Since many hang-glider pilots wear brightly colored outfits, any color you choose will be appropriate. Felt pens are probably the easiest to use, although color pencils or crayons would work. Note how the arms and legs are glued onto the pilot's body, and spread slightly. Glue the pilot onto the hang bars as indicated, and your machine is almost complete.

Decor: We said almost, because one of the things that makes real hang-glider meets so interesting is the fact that the craft are so colorful. While some are covered with transparent plastic, most are colored, and often feature insignia or slogans. Use your imagination plus colored tissue or felt pens when decorating your model, which will add to its appearance, in addition to making it easier to see while it is flying.

Flying: To fly properly, the 'sails' of a Rogallo type must bow upward evenly on both sides. If they are not in this position, the model will probably dive to the ground. With average grade Japanese tissue, the sails will be stiff enough to stay in about the right form. With very thin tissue, it may be necessary to 'fill' the sails by holding the model nose high, and walking a few steps before launching it.

The model should be launched very gently, with the wings level, indoors or outside in a dead calm. If it seems to hesitate in the air (stall) a small amount of modelling clay should be added to the pilot's feet. If the model dives (assuming the sails are full) a slight amount of clay may need to be added to the rear tip of the center spar. If the model veers off consistently to the right or left, add a dab of clay to the opposite wing spar.

A long straight glide is the desired goal. When satisfied that your model is performing properly, take it to a high place such as a porch or hill, and try some drop glides. For more fun, have one or more of your friends build mini hang-gliders, and hold contests to see which model can fly the farthest or stay up the longest."

Scans from dfritzke, cleanup by Circlip. 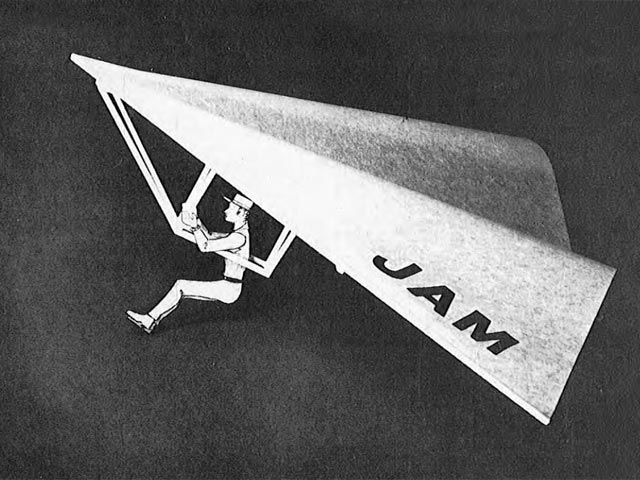