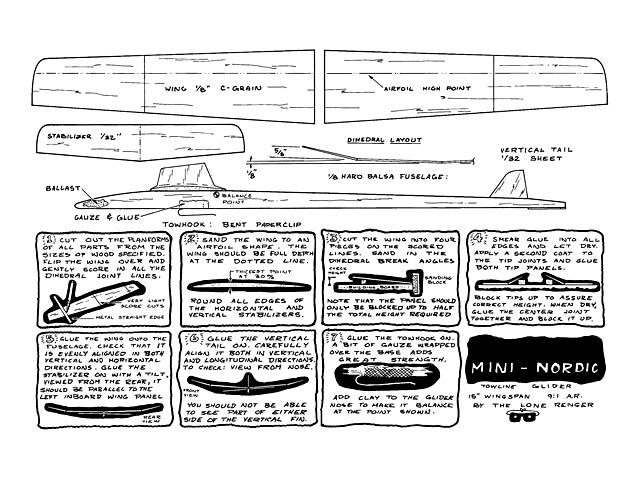 Quote: "For a sample of F/F towline gliding, try this one. Great for the budding competition modeler. Mini-Nordic, by Larry Renger.

The Mini-Nordic represents an excellent starting point for getting into flying towline gliders. Although this model takes only about three hours to build, it is easily capable of hooking thermals for out-of-sight flights.

The plans give all the model construction steps, so let's concentrate on the techniques required to do a really neat job. The first thing you need is the balsa wood, so a word about how to select it. The important factors are grain cut and trueness of the wood. Look at the edge of a sheet for small light lines; these are known as wood rays. When the rays are within a 30 degree angle to the surface of the wood, you have 'C' grain balsa. This is the cut of wood you want because it is more resistant to warping. Next, make sure the sheet you have chosen is not twisted, although a slight bow over the length of the sheet will cause no trouble.

The most difficult task you face in constructing the Mini-Nordic is proper shaping of the airfoil to produce a smooth, consistent contour all the way from tip to tip of the wing. Wrap 180 grit sandpaper around a flat block of wood so the cutting action will be even. Sand a bevel in the front and one in the rear all along the wing. The bevels should end about one third of the way from the 'high point' line so you can then sand the top and leading edge round for that smooth airfoil shape. Switch to 320 grit sandpaper for final sanding.

As you sand the dihedral break, check the resultant wing angles. No one can make these cuts perfect on the first try, especially on a small, thin wing. A solid wing/fuselage joint may be made by cutting a shallow groove in the fuselage as a saddle. The alignment is critical, so check it carefully. An easy technique requires only that you measure that the front and rear of the center dihedral joint are centered on the fuselage width.

The towline is made by tying a few square inches of silk about three inches from the end of some light thread. The thread should end in a small ring bent out of light wire, or a small washer. The silk acts as a drag to pull the line off the tow-hook when you relax tension. The ring reduces friction between the line and the hook.

Now let's go flying. Initially, balance the model on, or just ahead of the point shown on the plans. Choose a calm day for flying, as this is a very small model. Adjust the trim by bending the trailing edge of the stabilizer and rudder in the direction you want the model to go. For example, if the model stalls, you want it to go down more, so you bend the stabilizer trailing edge down a little. Correct the trim until a quick straight ahead toss results in a shallow climb to the left followed by a smooth transition to a left glide. You may have to remove wing warps to get the trim perfect. Just twist the warp out and breathe on the panel, then hold it for a minute for the heat and moisture to escape.

Trim in towing should need very little adjustment. Since most of the turn trim of this model is due to the stabilizer tilt, the tow should be quite straight. If the model weaves from side to side as you tow, the tow-hook is a bit too far forward. As shown in the photo a bent pin acts as your towline position limit stop.

Make all adjustments no more than 1/16 in at a time. If the model just veers off to one side, first recheck the wing for warps; if the alignment is straight, the tow-hook is too far back.

Towing the Mini-Nordic is only slightly more difficult than flying a kite. Have a helper hold your model, hook up the towline and run out about twenty paces of thread. Coordination in the launch is important. Your helper must take one or two steps with you as you begin to tow, then release the model smoothly with the nose pointed up at about thirty degrees. IMPORTANT: the launcher just lets go of the model, he must not toss or push it!

Tow only just fast enough to keep your glider climbing; slowly at first, faster as the model gets higher. To release, just stop running and raise your hand quickly. The patch of silk will drag the slack line from your glider.

Once you catch your first thermal with this little model, I think that tow-liners will have YOU hooked."

Mini-Nordic, 15" towline glider by Larry Renger from the April, 1975 issue of Model Builder. 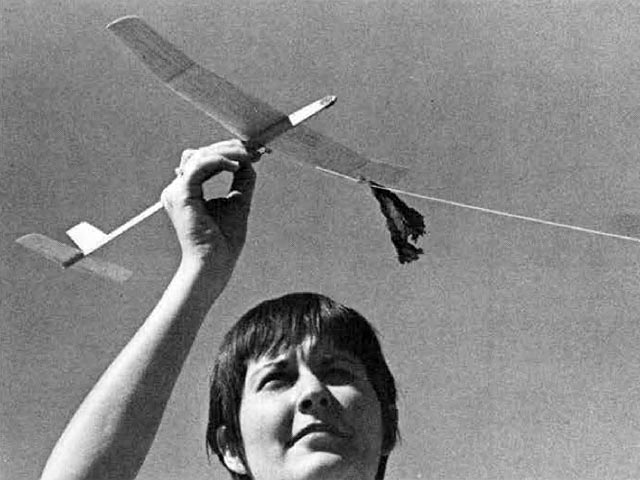