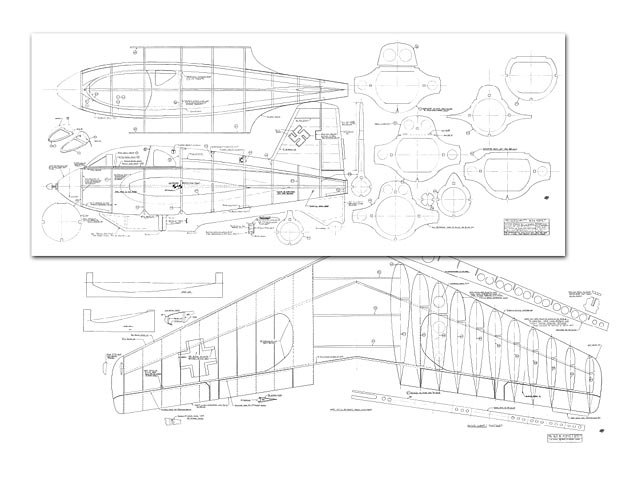 Quote: "Hello Mary and Steve, Attached please find a plan for the Messerschmitt 163B, designed by James W. Kiehl, USA. The model is IMAA legal and has competed and won various awards in IMAA meetings.
Me 163B can also be used as a glider if built super-light and will only use a .15 engine to take it to wanted altitude. The normal model is powered with a .61 engine.

Quote: "I have always wanted to combine R/C flight with model rockets, so I decided to scratch-build an IMAA legal size WWII warbird for under $500. I wanted to flip a toggle switch on the transmitter, and instead of 'expensive retractable landing gear' operating on this warbird, it would 'light the candle,' drop the dolly, and get altitude quick - super genius!

The ME-163 would be perfect and was available from guys in the club (Sal Cavagna and Greg Mottas) who could not believe what I wanted to do with it - high power rocketry with wings! Although the Komet does not need this extra power to fly, it has a sound effect that gets attention, and now that I'm flying it, that boost makes me feel like I'm in it. (Rudy Opitz has a lot of you know what...) With the built-in wash-out on the wings, the 163 flies very stable and goes where you point it under the glow power. Landings are a long, low approach because the Komet will glide forever, touch down, and come to a stop on its built-in skid on any grass surface. After meeting with Rudy Opitz, doing a demo flight for him and getting his thumbs-up, totally fulfilled this project for me. I know I've been getting lucky flying this model and attend as many warbird meets as possible along with Sal and the guys. We have a great time with the different warbirds.

My ME-163 is scratch-built using lite ply bulkheads, balsa spar, balsa sheet and planks to help with shaping the BWB (Blended Wing Body), covered with glass cloth, Z-poxy finish resin, lacquer primer, spray-painted with latex and water, and then clear-coated.

Modifications to the original model design include a fully sheeted wing instead of capstrips and covering. A high power rocketry 54mm phenolic tube was installed in the fuselage to allow for a wide variety of rocket engine sizes. The take-off dolley was designed in a more scale-like configuration by Sal Cavagna and uses CB Associates wheels and tires.

The radio is a Futaba 6XA Super with elevon mixing, although not needed to fly the Komet. Four channels are used for basic flight, with a 5th channel operating the rocket ignition circuit. Wing control surfaces are operated with four standard ball bearing servos. The throttle and ignition are standard servos, and the rudder/tail wheel use a 1/4 scale servo for strong ground handling and guidance. All servos are Futaba with Du-Bro servo arms and Electro Dynamics harness extensions.

The RATO (Rocket Assist Take Off) ignition circuit consists of eight AA on-board dry cells (12V) to another Futaba switch harness (Master Safety SW) plugged into yet another Futaba switch harness operated by the 5th channel servo, making the short circuit to the fuse (Ka Boom!). The rocket engines are expensive ($15.00 for each) and are supplied by Aerotech Consumer Aerospace. They are a G-40 size, solid propellant, with up to 28 lbs of thrust, and a burn time of 3.75 seconds. The 163 can accept much larger and longer burn-time engines, but G-size engines are the largest you can purchase from Aerotech without a BATF (Bureau of Alcohol, Tobacco, and Firearms) license which is federally regulated by attending high power rocketry meets and getting certified for the license. Also, you would need a special waiver from AMA for larger rocket engines to fly in an R/C aircraft. The sky's the limit I think. Anyway, make note that the Komet does not need RATO to fly, it's only for special effect. What a hobby!" 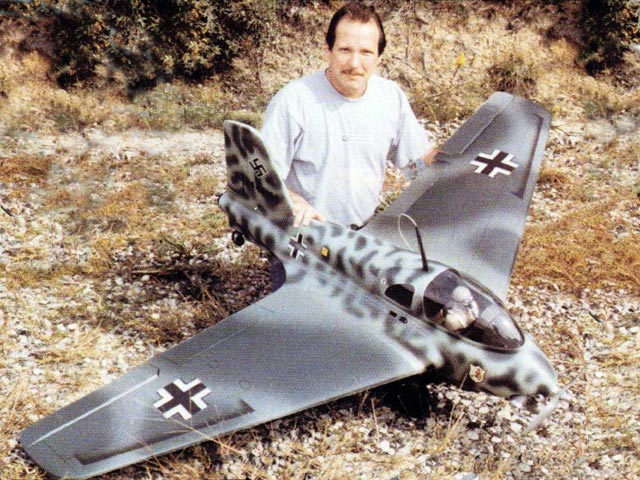 Interesting plan. Care though, the canopy (at least) is of odd, not scale shape. Given that basic error, it would be clever to check it all against a 3 view ...before cutting balsa.
fred - 26/10/2020
Add a comment