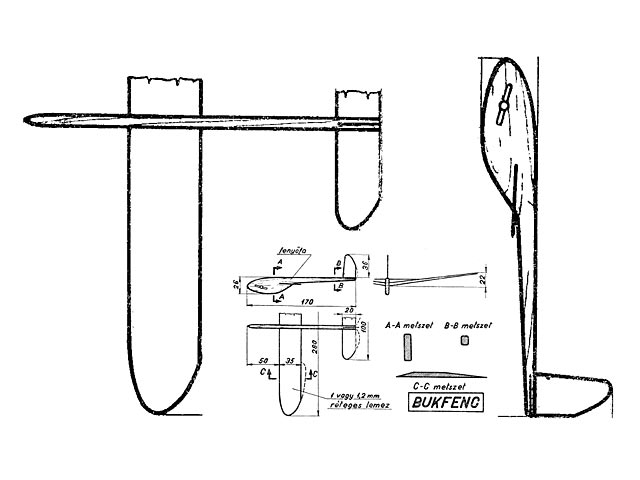 Quote: "Bukfenc (Loop). Hi, Guys, here is a very simple 11 inch wingspan chuck glider from Hungary, its name means 'Loop'. I've made its prototype 30 years ago. The plan was found in an old Hungarian aero modeller book, but I can't remember the exact date of it; the book was written cca. 1953-57. That book was written for students, and this small glider was planned for them. I made a photocopy of the plan from the book in the book club, where I'd found it, and builded the small glider, and we have a lot of fun with it - that's all I can tell about it.
Well, and now let's see the small model. I edited the original plans to convert it 1:1 size, but attached the original plan too, (the original pattern was inserted into an A5 size book, so I think you will prefer this simple 'print-and-cut' sized version than a smaller one). The sizes are metric on the plan.
When you build it (cca. 15-20 minutes), be careful with the angle of the wing attaching; there must be exactly the same as on the plan - that angle and the section 'C' will give the power to lift the glider when throwing.
The diagonal gap on the nose is for the place of the correct weight balance - put a small screw here, which you can slide to set the CoG under the middle of the wing. The wing must be glued firmly, because there will be serious forces when you start the plane on the proper way.
To start it grab the plane under the wing, and throw it strongly up to force a loop. At a good throwing with the optimal power and angle, against wind, the small glider will lift up, produces a loop, and descends slowly.
You may use a rubber slingshot to start it, in this case the proper angle will modyfied, but the glider will reach higher altitude, or rarely, two loops. Sincerely," 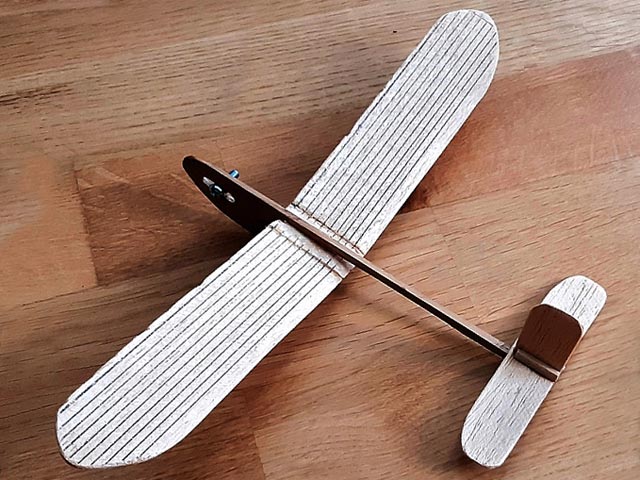