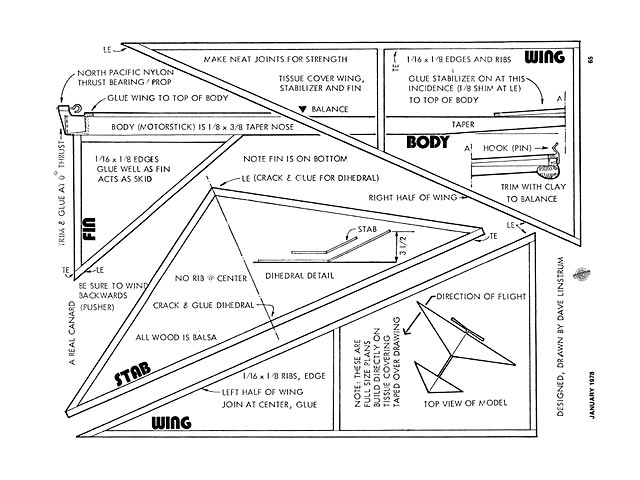 Quote: "In musical circles, it might be called a 'variation on a theme', but modelers would just likely say that the darn thing goes 'bass ackwards'! Call it what you will, it's a fun project. The Canardart, by Dave Linstrum.

Back when the author lived in Beirut (we got out fast when the guns started to go off, at the start of the civil war) we had plenty of building time but little to build with. We had brought a few Delta Dart (oz7931) kits along with us, and one of them happened to be the old style Delta Dart, kitted by Sig as the AMA Racer. This was the original design as conceived by Frank Ehling, who later modified it to what we now know as the AMA Cub. The basic difference is in the area of the flying surfaces - the old Dart had a nice, racy sweptback LE on the wing. It is still available as Sig kit FF-4. You can make a Canardart from the material in this kit, or scratch build with balsa, tissue and a North Pacific prop.

The idea behind Canardart was simply to do something a little different, try a tail-first design in a simple format (none of the sophisticated Doug Joyce stuff for us) and build something suited to small sites. Would you believe flying in the street? That's what we did before the snipers came.

The plans reproduced here are full size. If you get a kit, simply tape down the covering onionskin and build on it, noting that the fin goes on the opposite end of the motorstick from the normal model. If you choose to build from the scrap box, make a xerographic copy of the plans (never cut up your precious MB) and tape a sheet of tissue (Vintage Aero or Peck Japanese tissue) over them on a soft building board. Glue the wing and tail outlines to the tissue, getting glue in the wood-to-wood joints. Do not glue the motorstick to the tissue as on normal model. Once glue is dry (if you use a cyanoacrylate like Zap, that is instantly - but be sure to put plastic wrap under the tissue) you can trim the parts from the covering. We used a No. 11 X-Acto, but that's because we didn't have one of MB's fine Uber Skivers!

Butt-join the wing halves, propping up one tip 3-1/2 inches for dihedral. Crack the stab (forward wing) along centerline and prop up to same dihedral angle - see plan detail. Glue the subfin to the motorstick. Cut the top out of the plastic thrust bearing, leaving both sides intact to glue to the motorstick. Turn it upside down and glue on with 0-0 thrust. Now add the two wings to the motorstick, propping up the LE of the front wing (stab) with a scrap of 1/8 square. See detail at front of motorstick on plans. Now add a small rubber hook bent from a pin; it should hold the motor just above the LE of the front wing (stab). Check to be sure there are no offsets in any surfaces - this model is very sensitive to misaligned wings or fin. Torque will give it a natural turn.

Now make up a motor from 1/8 Vintage Aero or Peck rubber - it should be a loop about a foot long. There is no point in test gliding, since the model (being primarily an unorthodox sport job) does not have a super glide. Just wind on about a hundred turns for a lower power test, after insuring that the CG is at the right point (1/4 inch in front of rear wing LE). Add clay to nose to get this right. If the Canardart does nothing erratic, try about 200 turns, going up to about 300 turns max by stretch-winding with a winder. The Sterling 5:1 winder will do. Hook it up to the front of motor while someone holds prop shaft, stretch out 3X and begin to wind, moving in slowly. On the count of 60 (that's 300 turns) pinch the motor near winder hook, back off a few turns and you have a little loop to hook on the rubber hook. Be sure to wind backwards - this is a pusher!

If the model stalls, try a bit more clay or a fin trim tab to induce some turn. If it dives, try a bit more inci-dence under front wing, but do not move the CG back. Avoid trying to turn the model in tight circles. We hope you have as much fun with Canardart as we did in Beirut. We also hope the flying is under much more peaceful circumstances. With that in mind, we leave you with the Arabic farewell 'Mas salamah' which means literally: 'Go with safety.'" 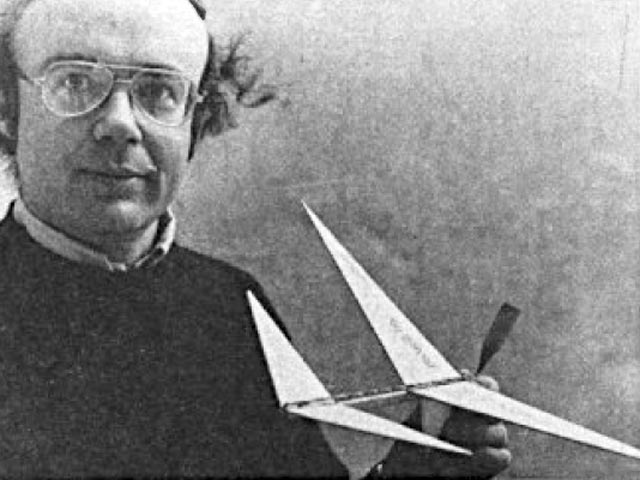