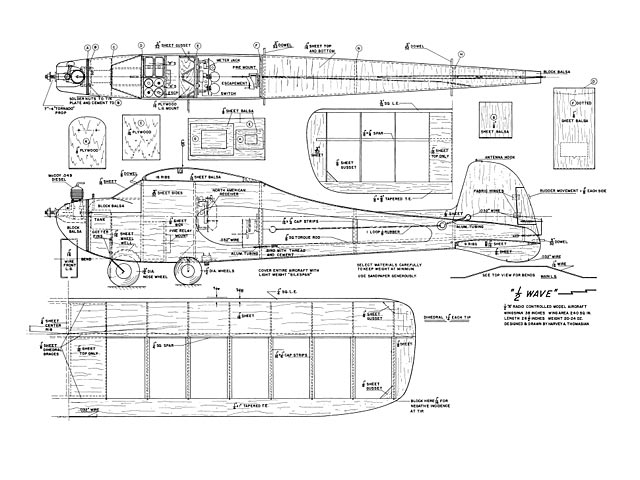 Quote: "This is one of the finest small RC jobs yet published. Because various experts who have seen it fly recommended that MAN print plans, you can bet your boots it is a real performer. Hot .049's to .065's.

The 1/2 Wave began as a small radio job designed to duplicate the flight characteristics of larger radio controlled ships. To this end we have built into the ship good stability, both directional and longitudinal, excellent wind penetration, and maneuverability.

The ship is of robust construction - take a glance at the plans - and will take all kinds of beating without falling apart. The construction is conventional in most respects and sufficient information is given on the plans to enable one to assemble the ship with ease. Each piece of balsa is a common size obtainable in all hobby shops. There is sufficient room in the fuselage to accommodate any of the smaller receiver units on the market now. Our ships have been flown with the Lorenz and the North American two-tube receivers. The North American job is shown on the plans.

Much fooling around was done with landing gears before the one shown was chosen. Inasmuch as the nose wheel is mounted on a trailing link, there isn't much possibility of its bending back. Its semi-retracted position prevents nose-overs in deep grass common to long dangling type nose gears. The moment arm between the nose wheel and main gear is short, minimizing the effect of leverage and permitting the ship to be steered by rudder during take-off. The main gear is located under the center of gravity to lessen a nosing down tendency from thrust during take-off, and shortens the take-off run.

Each wing half is built complete on the plans, including leading edge sheeting and cap stripping. This eliminates the addition of parts after the section has been lifted from the plans and thereby prevents warping. Only the center sheeting, rib, and dihedral braces are added later. There is no construction on the underside of the wing as it is flat and most of its strength belongs in the upper curved surface, anyway. Do not forget the 1/16 in negative incidence in the wing tips. It would be wise to watch this during covering and doping. The left half wing is constructed by oiling the opposite side of the plans and working from it.

Escapement installation follows conventional practice. We used the reliable torque rod method of rudder control as it is easy to adjust and maintain. The forward position of the escapement keeps the CG forward and allows easy inspection and adjustment..."

Update 14/10/2013: Have replaced this plan with a clearer copy, thanks to theshadow. 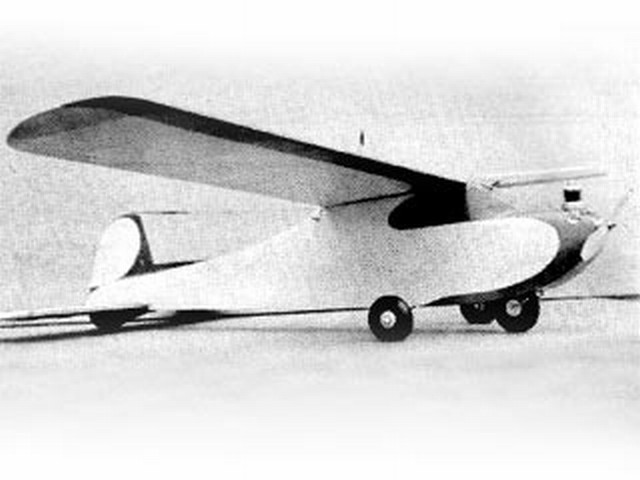