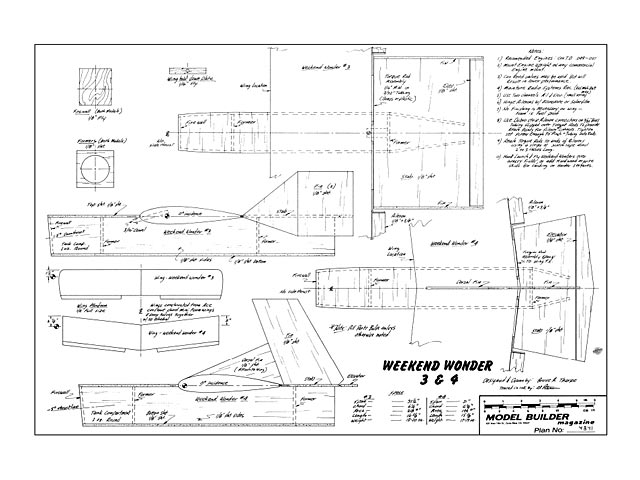 Quote: "If you've ever wanted to mess around with flying wings, but you weren't sure just how involved in a project you wanted to get - consider the Weekend Wonders. These little gems are easily built in a weekend (thus the name), and because they're built with Ace R/C foam wings, they're quick.

The name Weekend Wonder wasn't my idea. Actually, I had no name at all for the first model (which I built during the course of one weekend, naturally). When my father jokingly referred to it one day as a Weekend Wonder, the name just seemed to stick.

The first Weekend Wonder had a swept back wing, single fin and a Cox Golden Bee .049. It flew reasonably well once I added a Medallion .049 and cu red its noseheavy condition. On the same day that it crashed (due to a poor hand launch), Weekend Wonder 2 was test flown, On its first attempt, it went into gyrations and crashed also, obviously the victim of an aft CG. This was all a bit discouraging, but the models were so easy to build that I just had to continue experimenting. Number 3 was a total success (I finally got that dreaded CG in the right place!) as was Number 4. The models presented in this article repre-sent slightly refined versions of the originals.

The design philosophy behind all of the Wonders has been to produce simple, inexpensive, fast-building models. Weekend Wonders may not be the epitome of simplicity, but they are awfully close. However, I wanted to have relatively high performance also. These somewhat conflicting requirements took a bit of thought, but resulted in a rather unique series of aircraft, I would liketo review some of the thought process behind the models now.

The size of the model was dictated by cost: two-channel, 1/2A models are simply cheaper than larger models. The simple omission of landing gear cuts down building time, cost, drag, weight, and eliminates the need for a paved runway. The shoulder mounted wing makes hand-launching a breeze. The largest compromise made against simplicity was the use of Tee Dee engines and seperate clunk tanks. Bolting a Golden Bee to the firewall is certainly fast and easy, but the performance gain with a Tee Dee is well worth the extra time and cost.

To greatly speed up construction time, the Ace constant chord Mini Foam Wing was chosen as the heart of the model, The wing halves are simply epoxied together; no covering is necessary because the foam is fuelproof (saves money and time). The semisymmetrical airfoil is just fine for aerobatics, and results in a gentle glide once the engine dies. The rest of the model is constructed of 1/8 balsa sheet..." 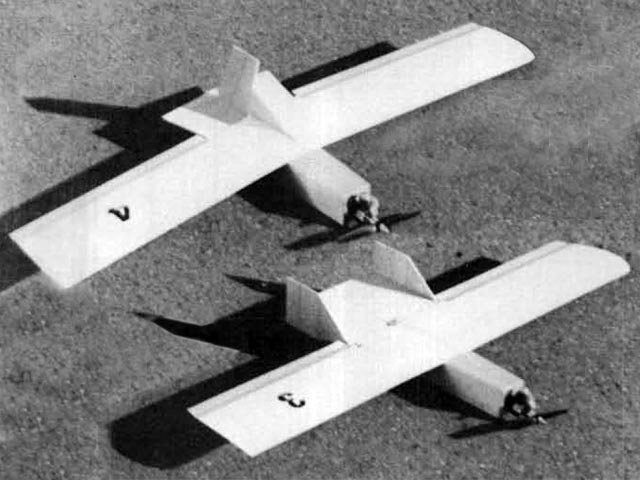