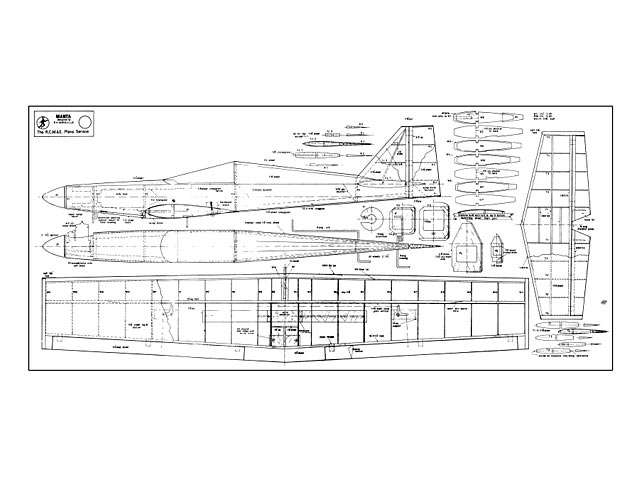 THIS design was born out of a desire to replace my tired old .40-powered 'plank' (which was getting rather soggy and threatening to fall apart at any moment), with something a little more sophisticated.

I'd long had the yen to try some of those more advanced design features that are normally found on the larger .60-powered aerobatic machines, but on a smaller, more economical model. What would happen, I wondered, if one incorporated a proper airfoil section built-up tailplane, and a thick streamlined section fin instead of the more usual flat plate devices that are found on this class of model; and would a slightly greater percentage thickness toward the wing tips help to avoid any tip-stall tendencies? There was only one way to find out, so I started to scribble on bits of paper and hack at bits of balsa until I finally came up with this little model.

I was pleasantly surprised to find that the formula seems to work. The change in wing section, as it progresses outwards, does seem to give the model good low-speed characteristics - it's certainly very easy to land! Also, the fact that the response of the whole model is so smooth does indicate that the thick tailplane and fin are doing their jobs well, with the added bonus that the model's speed alters quite quickly in response to throttle changes. All this - and it's good looking too! (Well, I think so anyway).

Two prototypes have been built, the second incorporated slightly larger ailerons, top instead of centre hinged. This is the version shown on the plan. The model is very uncomplicated to build, despite those built-up tail surfaces and if you follow the building procedure I've shown, you'll be surprised how quickly it goes together. Pretty well any motor in the .35-.40 class will haul it around quite happily, but for precise aerobatics, good vertical performance is important, so a high-performance .40 motor does help. (The prototypes have both used HP 40F motors.) Also very important is the fact that, the lighter the model is built, the better its capabilities in the aerobatic manoeuvres will be.

Wing: This is built in one piece, flat on the building board, upside-down so that the only dihedral is on the lower surface.

Start by laying down the upper spar - this is made up by scarf - joining two short pieces to each end of a standard 36 in length, which means that the spars run unbroken right through the centre section. This does away with the need for dihedral braces. Next, add the ribs, jigging them up so that the centre lines are parallel to the board. Don't forget to add the 1/16 in ply doublers to W2 and W5, to take the undercarriage plate.

The false leading edge and the trailing edge are now added; also the lower spar which is prepared in a similar way to the upper one. The basic framework may now be lifted from the board, so that you may add such things as the ply plate for the wing bolts, the aileron linkage and the undercarriage plate, etc. You will note that the latter runs right across freorn one side to the other - don't worry, it will negotiate the very slight lower surface dihedral quite easily, as did the lower spar. After all has been safely gathered in..." 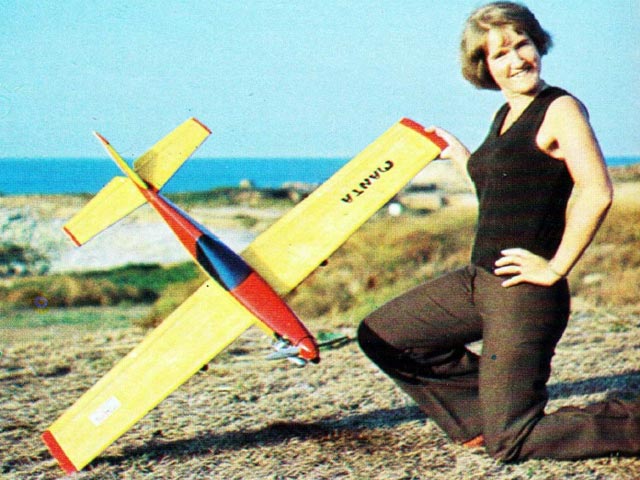