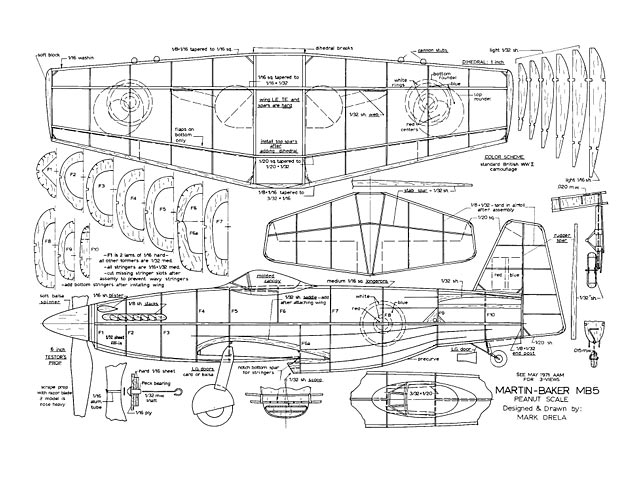 Quote: "One of the hottest prop-driven fighters ever built, the MB-5 makes an excellent subject for experienced Peanutters.

The MB-5 was a British fighter designed during WWII by Martin-Baker, today known for its ejection seats. It was the last word in piston-driven prop fighters, possessing good maneuverability, forgiving handling characteristics and a top speed of 460 mph plus. If that wasn't enough, its simplicity of design made it easy to service and manufacture. Unfortunately, the war was drawing to a close and jets doomed the prop-driven fighter to extinction. The MB-5 was never put into production and only the single prototype remained.

The airplane has very good proportions for a Peanut scale model. No intentional deviations from scale were necessary. The scale dihedral is adequate even in rough air. Like any low-winger, however, it is rather demanding of precise trim and is not suitable as a first Peanut model.

The fuselage is built according to the standard half-shell recipe. Be sure to pre-curve all the 1/16 sq longerons by lightly rolling with a pencil before assembly. This is necessary to avoid pulling everything out of line. Add about three degrees of right and down thrust to F1 to minimize shimming later. Cut the stab slot in F10 after everything is finished. Leave off the three bottom stringers until the wing is installed. The missing stringer slots are easily made by first sighting along the fuselage, marking the stringer positions, and cutting the slots while supporting the formers on the corner of a table. Don't leave off the 1/32 sheet fill-in between F1 and F2.

The wing is fairly straightforward to build. Cutting all the tapered strips might be a little tedious, but is well worth the results. A note about the landing gear: my model was built without wheels, since they add weight and drag, take a long time to make, and put the wing in peril in a hard landing. If you decide not to build the gear, leave off the 1/32 sheet web.

The tail surfaces on this model are rather unique for a Peanut in that they are cambered. This not only makes them warp-proof, but also improves their appearance. Although the plan shows the rudder cambered on only one side for ease of construction, it can be built with double camber if desired. Simply shim up the leading and trailing edge with 1/32 sheet.

The wing installation is kind of hairy. First of all, cover the entire wing with tissue, including the center bay. The dihedral should already be installed. Next, shrink the wing lightly with steam from a steam kettle. Full water-shrinking is a very bad idea with fragile Peanut structures. Now, in the center bay only, trim away the tissue between the front and spar and the LE and also between the rear spar and the TE.

To prepare the fuselage for receiving the wing, mark the LE and TE positions on F4 and F7. Cut away the bottom longeron between F4 and F7 by making diagonal cuts; save the two pieces. The wing should now slip into the fuselage, with F5 and F6a sliding into the holes in the wing. Keep in mind that this is strictly a custom job, so be prepared to do some hacking or shimming if things don't fit properly. When everything does fit, glue the spars, LE and TE to the formers, getting everything lined up right. Now add the longeron pieces which were removed earlier, install the missing stringers, and add the scoop intake. Trim a bit of the bottom tissue so the bottom stringers can be notched into the bottom rear spar.

To prepare the fuselage for covering, add the wing saddle pieces flush with the wing tissue. Covering is best done with separate strips of tissue between the stringers. Either dope or thinned white glue can be used. In any case, use a syringe or a glue gun to apply the adhesive. It’s twice as fast as a brush and a lot neater. Use steam again to shrink the fuselage tissue. If there are still loose spots, they can more often than not be eliminated with a little water.

On my model, I used dark green tissue on top and white on the bottom, as an approximation of the British WW-II camouflage scheme, if you own an airbrush, you can improve on this. For making the panel lines, rivets and control surface outlines, a technical pen is hard to beat. If you decide to use a fine permanent marker instead, put it on last, since dope will dissolve the dye.

Because the MB-5 is a rather large and bulky Peanut, it is best suited for outdoor flying. The big Tern Aero or Testor's 6-inch prop is very effective on this model and will handle lots of rubber for good flight times. Before flying, check that the CG is about 1/8 inch behind the front spar.

The flight pattern on my model is rather unusual but effective. The ship turns to the left in a wide arc under the power burst and then turns right for the remainder of the flight. For power I use a 22-inch loop of 1/4-inch Sig rubber. This gives flight times of about a minute. Since the model is light for its size (about 12 grams), the flight performance is not unusual. Pirelli should boost the times still further. Have fun."