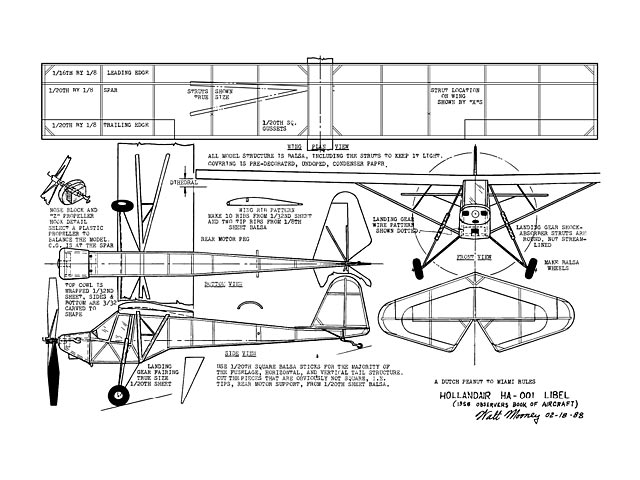 Quote: "Hollandair Libel, by Walt Mooney. This month the Perfesser digs deep into his bottomless bag of Peanuts to come up with this Dutch import. It's covered with condenser paper, and Walt tells you how to preshrink it too.

Here is a simple little Dutch Miami Peanut which is easy to build and flies very well. The model in the photos weighs eight grams, complete with the rubber motor. It is quite stable and it is possible that it would still be flyable with a scale-sized tail. The increase in horizontal tail size and in propeller diameter is the only intentional deviation from scale dimensions.

An attempt was made to keep this model as light as possible for indoor flying. 1/20 sq instead of 1/16 sq was used for the main fuselage sticks and for the tail structure. Un-doped condenser paper is used to cover the model. The covering was decorated with black felt pen before the model was covered, but after the condenser paper was water shrunk to minimize the chance of warping the structure.

Start this model by making a wood frame the size of your condenser paper sheets. The wood members should have a large enough cross-section that the frame will not warp under the tension of water shrinking the paper. My frame was 11 by 25 inches made with an outline of 3/8 x 3/16 hard balsa with a single cross brace at the halfway point. Using thinned white glue, cement the borders of your condenser paper to the frame. When this has dried, lightly spray it with water and set it aside to dry. Now commence to build the structure of the model directly over the plans; fuselage sides, horizontal and vertical tail and wings, after first cutting out the wing ribs. Do not install the wing spar while the wing outline is on the plan because it has to be shortened at either side of the two center ribs to allow for the dihedral. When all the parts are dry, remove them from the plan. Crack the wing leading and trailing edge just on the outside of the center ribs and block up each tip to give the proper dihedral then carefully fit the wing spar in place, cracking it to allow the dihedral. A tiny drop of glue at each rib/spar intersection will make the dihedral permanent.

Using a thin blade, separate the two fuselage sides. Then, starting at the aft end, put in all the cross pieces using the bottom view to determine their length. When this assembly has dried, add the pieces of 3/32 sheet to the cowl sides and bottom. Carefully bend a piece of 1/32 'A' grain sheet to form the top of the engine cowl. Note the nose block detail and make a backing block to fit snugly into the front of the fuselage. Cement this onto a piece of balsa the right thickness and a little bit bigger than the nose block needs to be, and fit it into the fuselage. Then, using a very sharp blade, carve the front end of the model to shape using the front, top, and side views as a guide.

Now, using some fine sandpaper, smooth all of the balsa structure in preparation for covering. Note that the leading edges of all the flight surfaces are rounded and the trailing edges are tapered. Using very fine piano wire, bend the landing gear wire to match the pattern in the front view and cement it into the fuselage.

Now the condenser paper should be decorated using a permanent felt pen in preparation for covering. Carefully lay out the registration numbers on pieces of paper large enough to cover the part in question. Then, using thinned white glue, cover the part being careful to keep the lettering properly aligned.

The windows are thin clear plastic. Pick the thinnest you can get off a food wrapper or other source. The assembly of the various parts into the complete model follows conventional practice. Make the main wheels from balsa. Add the details such as the struts, tail braces, and tail wheel. Also add the carburetor air scoop and the exhaust stacks. Use flat black paint to simulate the cowl openings, and paint all three wheels flat black also.

Use a thin black felt pen to put on the outlines of the ailerons and to show the tail hinge lines. Put a hole in the nose-block assembly to accommodate a plastic thrust button and install a plastic propeller, bending a Z hook as shown in the detail of the nose assembly. Don't forget to put a washer between the thrust bearing and the propeller.

Balance the model at the wing spar after making up and installing a rubber motor. The model in the photos flies well on a single loop of 1/16 rubber 10 inches long. The original model required a little more nose weight than it came off the drawing board with, and this was achieved by selecting a heavier plastic propeller than the Sleek Streek propeller originally fitted and showing on the skeleton photo. Condenser paper does not have to be doped to be airtight, and for a really light model it should not be doped. As a consequence, this model is pretty well an indoor flier. The condenser paper will sag if it gets wet by landing in the dewy grass on a calm early morning, so be aware. (Guess who found out the hard way? Although luckily, none of the newfound warps proved to be non-removable.)

Have fun with your Dutch Crop Duster."

Quote: "Herewith, another submission: a unique and rather attractive aircraft, the Hollandair HA-001 Libel. Plan by Walt Mooney from the July, 1988 issue of Model Builder. This plane had a chequered and short lived history. Mooney has given his model registration PH-NOY, although the sole example of the aircraft was registered PH-NGX. Due to inconsistent rib spacing on the original plan, I've done a complete redraw of the wing to ensure a flyable model. Thanks again and best regards," 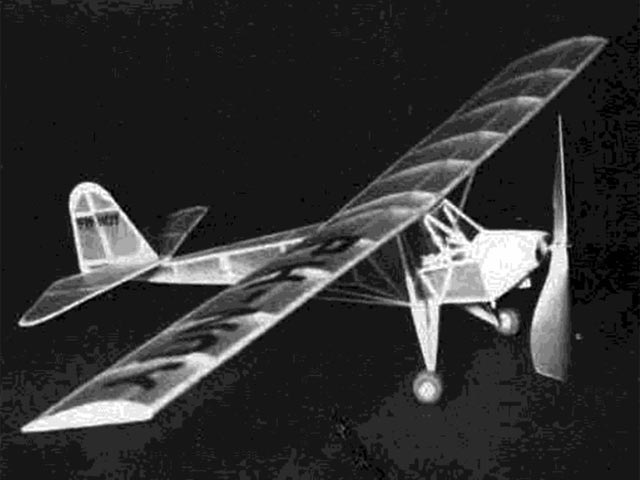