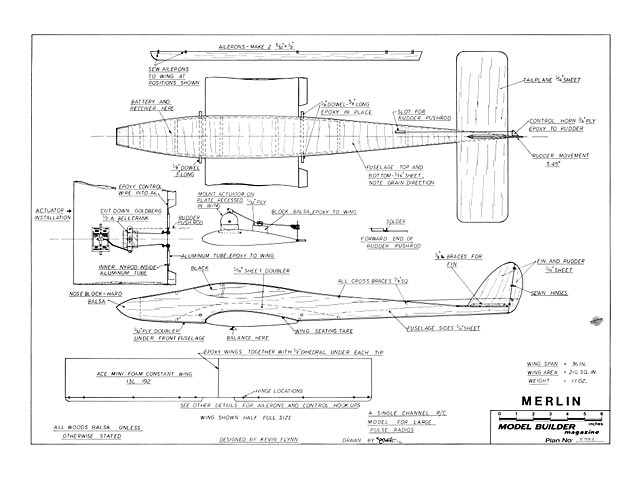 Quote: "A whole bundle of fun in a small package. That's the best way to describe this little foam-winged, single-channel aerobatic glider. Merlin, by Kevin Flynn.

Merlin started out as part of a long series of experiments with Galloping Ghost models, both power and gliders, using rudder only. Now called pulse proportional, which sounds more elegant, I decided to carry on once again. So, putting away my 5-channel Kraft, I rummaged through the radio drawer in my workshop and found my old Testors single-channel pulse proportional. No matter what I tried, it just would not work. After ten years, I guess it had given up (The Ghost). Anyway this gave me a good excuse to buy a new one.

Reading my latest issue of Model Builder, I noticed the Ace Com-mander Radio is now available on 72 mHz. Perfect! Off went a check to Missouri for one complete outfit, plus the Stomper Actuator and the little adaptor forush-pull opera-tion. This is a handy little system, so small and light. The extra actuator comes with its own battery pack.

Now for a model. I wanted some-thing quick to build, so I chose a glider using a set of Ace foam wings (No.131-192). This is beginning to sound like a commercial message for Ace, but they do have excellent products (Your 30 seconds are up, so back to the story).

As I said, my experiments had gone on for some time before switching to full-house radio. Coupling the elevator to the rudder linkage to get a small amount of up-elevator in turns to keep the nose of the aircraft up, was one of the experiments. This worked very well, but I will save that for another time.

For The Merlin, I wanted a little different approach again. How about ailerons instead of rudder? I had tried this with a two-channel glider and it was disappointing without the rudder. The turns were flat instead of banked, also this model just did not have the speed for aerobatics. I decided to try and come up with a coupled ruclder-aileron system, using several dif-ferent set-ups on the bench. Some were pretty mickey mouse and would bind up. This idea of using a bellcrank with extra holes seemed to work fine; it ran on the bench for 90 minutes without a hitch.

This prototype test allowed time out for me to have a brew and watch some TV, oh yes, and also take a look at my wife again. Aeromodelling wives are a special breed, and if you have one, don't let her get away, they are very hard to find - a most understanding species.

With the equipment checked out, I was ready for the model. With it sketched out roughly on graph paper, I started to build. Suddenly I realized I had only used 3 sheets of 1/16 balsa, a couple of pieces of 1/8 square, and some wire. This was the most inexpensive model I had ever built. With the Ace foam wing at $2.95, the total cost was around $6.00, and it could be built in one day (honestly, with Hot Stuff).

To sum up a long story, the model worked out beyond expectation. It will roll, do many maneuvers other sailplanes will not do, and, if you are easy on the stick, it will soar with the best of them. Just keep the rudder movement small. It may require some adjustment for individual models. Overall, it is easy to build and very easy to fly. If you are ready, why not start building your Merlin, the Aerial Magician.

CONSTRUCTION: Begin by cutting out fuselage sides from medium straight-grained 1/16 balsa. Next, cut out the 1/16 balsa wing doublers and glue in place. Be sure to make one left and one right side. Use a slow-drying glue, such as Titebond or white glue, and pin to a good flat surface. While this is setting up, cut out tailplane, fin, and rudder; also the small balsa nose block.

Next, glue the Ace foam wing together with 5-minute epoxy. Use only 1/2 inch dihedral under each tip. This is a small amount, but has proven quite sufficient in our flight tests. The ailerons are cut from hard 1/16 sheet balsa, or if you have a strip of 3/32 by 1/2 laying around, you can use this instead. Epoxy the wire control rods into the ends of the ailerons. When dry, sew the ailerons to the wings with button thread. After you have completed this, spread some epoxy on the foam wing at the sewn points for rein-forcement.

The actuator is fixed to a small 1/16 plywood base and epoxied to the wing as shown on the plan. Mount a Goldberg or Top Flite nylon 1/2A bellcrank on a small balsa block and glue in position on the wing. Remove the bellcrank from its mount and drill an extra hole for the rudder pushrod and actuator arm. Bend the aileron couplings from 1/32 wire, also the small linkage from the actuator to bellcrank. Hook everything together and check for freedom of movement..." 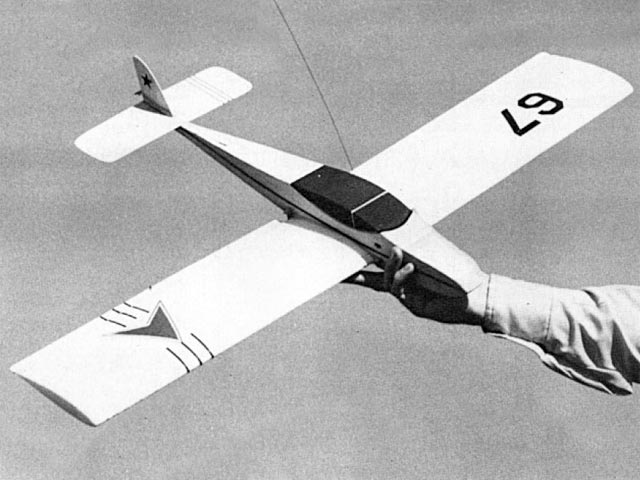