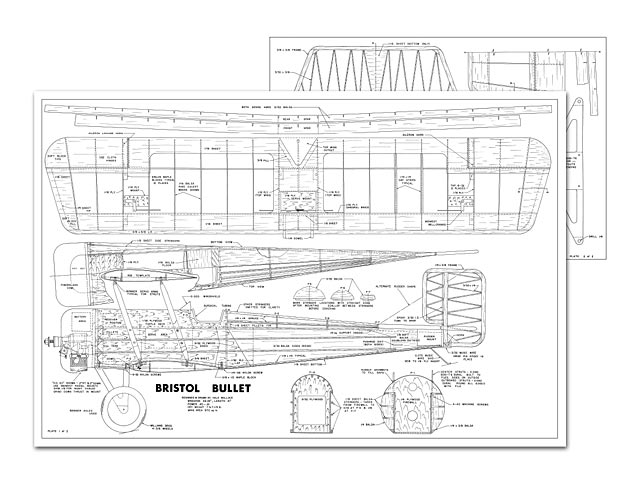 Quote: "Want to be the center of all eyes on the flying field? Then build this exciting version of a famous World War I fighter that can fly with the best on Sunday or at scale events. Bristol Bullet, by Hale Wallace.

Why not get away from the Class III contest rut and try a World War I Biplane for an exciting change of pace? Last winter, some members of the Aeroguidance Society of Endicott NY came up with the idea of build-ing a series of WWI ships (not necessarily biplanes) as a club project. The basic ground rule was that the real aircraft must have been built prior to 1918! Shortly afterward, the Poughkeepsie IBM R/C Club also picked up the idea and created a set of rules to be used at an all WWI contest held at Cole Palen's Rhinebeck Aerodrome in September. The Bullet placed first in Combat and second in Maneuvers at this meet, competing against twenty other models of various types.

My first reaction to the idea of a World War I ship was at best cool, for all I could vision was a construction nightmare with the end result a delicate model of less than adequate performance.

Many years ago I remembered a cute little bipe called the Bristol Bullet, published in one of the model magazines as a rubber model. It had caught my eye then as a natural for a powered model, since the construction was quite simple. Thinking about this model changed my mind about building an R/C ship.

For a period of time, I searched high and low through the profile publications and other sources for a set of three views from which I could scale up some working drawings, but all to no avail, because nowhere could I find the Bristol Bullet listed. One day, while in the local hobby emporium, I happened to notice a Guillow model of the Bullet in their popular WWI series. Reading the plans, which by the way were perfectly suitable for scaling up, I realized why I had not been able to locate plans previously. The ship was originally known as the Bristol Baby Biplane and later known as the Scout. In both the RFC and RNAS, the little biplane was popularly given the nick-name Bristol Bullet.

Profile Publication #139 Bristol Scouts C & D will provide an adequate scale presentation for those who wish to add detail to the model for scale competition and provide an extremely interesting history of the ship. This publication has an excellent set of three-view drawings and shows numerous color schemes and other details.

I had previously decided that this would not be an all-out scale project but a rugged everyday airplane that I didn't have to worry about every time it was flown. The model did win the scale event at Rochester NY this year, however, which speaks well for the new scale rules. (I'm afraid my heart won't stand up to many more scale test flights!) To this end, I used extremely simple construction techniques, a la deBolt, and simulated the landing gear with sheet aluminum rather than fool with a built-up wooden version. The struts were also fabricated from aluminum for simplicity. The airfoil used was borrowed from my Aeromaster (oz1971) plans. Actually, the Bullet is an Aeromaster in WWI clothing except for a shorter nose moment. All other force set-ups are almost identical. I must admit some apprehension over the flying rudder, but to date, no visible wear has appeared, and I can see no difference in flyability with normal throws.

Enough for the design concepts and on to actual construction:

WINGS: Both wings are identical in construction except for the cut-out in the top wing and the physical location of the strut attachment blocks. These minor differences can be seen on the plans.

Cut (32) ribs from 1/16 balsa and (6) from 1/16 plywood using the template shown on the side view. My method for cutting ribs consists of stacking 1/16 balsa between two aluminum templates that are held together with 6-32 machine screws at front and rear. The ribs are then sanded to shape using 80 d paper to rough out quickly and then finishing with finer paper. For this model, I made ribs for the top & bottom wings separately, because the screws were not long enough to stack enough ribs for both at one time.

The spars and leading edge are made next and are glued together with required dihedral braces at this time.

Assemble the ribs to the spars in egg-crate fashion but do not glue at this time. Careful notching of ribs and spars provides a rigid structure that is self-aligning. Note that the top wing uses a plywood rib at the four strut locations and that the bottom wing only requires two plywood ribs.

Pin this structure over the leading edge with the ribs straight up and glue all joints. Once the basic structure is dry, the trailing edge sheets may be added, one surface at a time, and allowed to dry. Remember to add the internal supports on the top wing so that the cut-out may be made after sanding. Add the maple strut attachment blocks as shown and add the leading edge sheeting. Once dry, this style construction cannot warp without breaking and offers the lightest and most rapid type I have seen. The basic structure should then be removed from the board..." 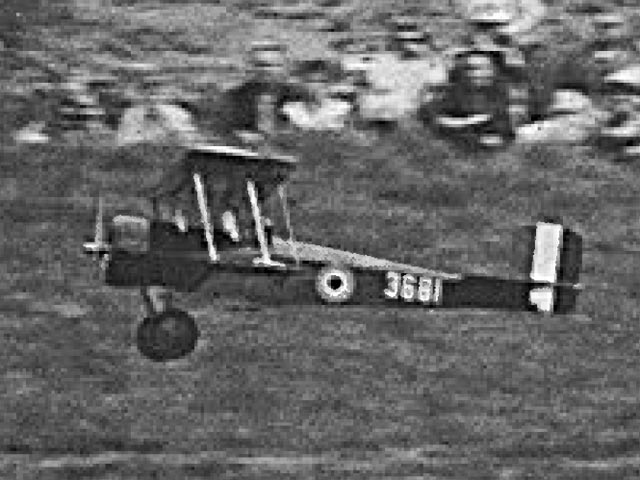