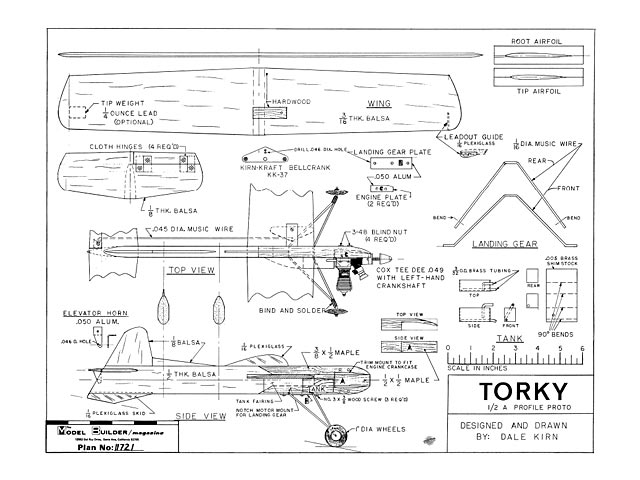 Quote: "This simple-to-build Half-A Profile Proto ship has many years of experience behind its clean and functional lines. The article alone is like a textbook on 1/2A speed. Torky, by Dale Kirn.

It isn't often that the AMA will establish a special event just for Junior flyers only. But that is exactly the case with 1/2A Profile Proto. The idea behind this event is to encourage Juniors to enter a plane in the speed category at a minimum of expense and building time.

The rules were so written that the modeler has to build an airplane that will fly. That may sound a bit silly, but let's take a close look and see why we said it. Ever since 1/2A speed planes have been around, they have achieved the reputation of being the most difficult type of speed plane to fly. Only a few experts can make them fly right and go fast. The average modeler just is not aware of all the 'little things' that are necessary to make a successful 1/2A speed plane.

The majority of 1/2A speed planes made are usually too small and improperly balanced. When flown in the slightest breeze, they either fly erratic or torque will roll 'em right in at the flyer. The logical solution to these problems is to make a larger plane that is easier to fly - even though it may be a bit slower. Thus, the reasoning behind 1/2A Proto.

The object of 1/2A Profile Proto is to cover a 1/2 mile (10 laps on 42 feet of .008 lines) from a standing start in the shortest amount of lapsed time. In order to do this, a relatively light (4-1/2 to 5-1/2 ounce) plane is needed. It must build up speed quickly and main-tain that speed for at least 10 laps. The rules state that you must have your wrist in the pylon within the first lap. This feat can be quite a problem for the inexperienced flyer, especially if he flies his plane counterclockwise - as most modelers do. When the plane is released, the engine torque causes the plane to come in at the flyer. He must run back until centrifical force will keep the plane tight on the end of the lines. In the meantime, he must get his wrist into the pylon before the plane completes the first lap.

This torque problem has been plaguing 1/2A Proto flyers for quite some time, but there are at least three solutions to it:

With the solutions listed above, the modeler takes his plane off with his wrist in the pylon. This solves both problems. Solution number 3 was chosen for TORKY. All of the 1/2A Proto (Profile) records since 1969, have been set using this principle. The present record is 83.41 mph, set by Harvey Dickinson of North Hollywood, California. In 1970, Jimmy Wade, Anaheim, California, set a record of 86.12 mph. This record no longer stands, due to a rule change (age classification lowered for Junior flyers).

Availability of a large selection of left-handed propellers undoubtedly has discouraged many modelers from using this torque principle. Grish has made several left-handed 1/2A Props. His 6-4 and 4 1/2-4 props do a fair job, but they are a little too thick and flexible for speed use. The author has been experimenting with left-handed props for several years and is currently producing a 1/2A Proto prop (4 x 5). These props currently hold the records mentioned earlier.

The left-handed crankshafts have always been available from the LM Cox Manufacturing Company, Box 476, Santa Ana, California, 92701. They sell for $2.25 each, part number 1715. It takes about 10 minutes to disassemble the TD 049 and install the left-handed shaft.

All the basics of speed flying can be learned with a 1/2A Proto (profile) plane. It isn't any one item that makes an airplane go fast. Rather, it is a combination of many factors, such as the airplane design, balance, the engine, the fuel, the propeller, the fuel tank and the weather conditions.

Vibration is the most important thing to keep in mind when designing and building a 1/2A Proto. The three areas that must be watched very carefully are the engine mount, tail (stab/elevator) assembly, and the landing gear assembly. Not only can vibration rob RPM from the engine, but it can also start a foaming condition in the tank and cause an erratic engine run during flight. Therefore, if these areas mentioned look a little 'beefy' on the drawings, it was done so with this vibration factor in mind..." 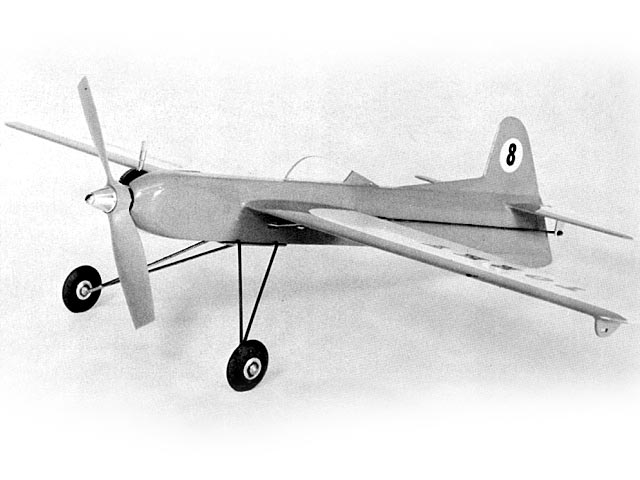