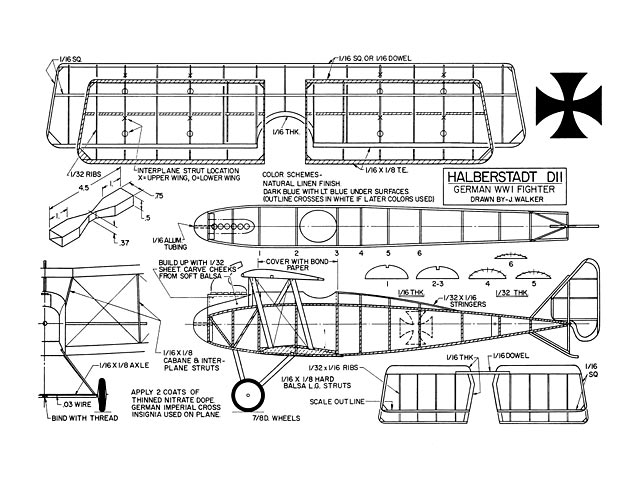 While looking through FIGHTER (Bryan Cooper and John Batchelor, Ballantine Books, 201 East 50th St, New York, NY 10022), the Halberstadt D.II caught our eye. A bit of research found that it was a sturdy airplane, but at 90 mph was a bit too slow for the Allied aircraft of the mid-1916's.

Construction is typically 'Peanut'. Mount the plans on a flat building board. Protect it with clear plastic sheet. We usually use the backing sheet from Monokote - waste not, want not.

Start by constructing identical fuselage sides from 1/16 sq balsa. Hot Stuff or a similar adhesive will greatly speed construction. Assemble the finished sides by starting at the nose. Make sure the work is square. As mentioned in a previous Peanut article, we used aluminum blocks machined square at the local high school machine shop.

Add the formers and stringers. Strengthen the area in the tail where the dowel holding the rubber will be mounted. One advantage of using a cyanoacrylate adhesive is that the excess adhesive adds very little weight, and is absorbed into the wood where it greatly improves the strength of the fuselage.

Lightly sand the fuselage before covering. Bond paper is shown on the plan for the area around the cockpit. However 1/64 sheet balsa may be substituted.

Last, but not least, we come to the wings. Use care so they will be warp-free. Ribs and tips are cut from sheet. You may form the tips from 1/64 bass wood shaped over a cardboard pattern, if you want to take the time.

The Halberstadt flew under different flags. They were standard in the Turkish Air Force for years. See our SPAD XIII (oz5377) for how to make up the Turkish insignia. The Maltese Crosses were painted on the model. Assemble the wings and tail surfaces to the fuselage. Use care when aligning and rigging the airframe. It is the secret to good flight.

Two wings produce a good bit of lift. We carved the propeller from bass wood. It is the easiest way to get weight at the nose.

Test glide over tall grass. Add weight (clay or bits of solder) until you get a suitable glide. We used a loop of 1/8 rubber for power. You may need 3/16 rubber if you didn't build in the lightness previously mentioned.

Our next step is to double the plan size, beef it up a bit, add an .02 and an Ace Baby Pulse System, and fly it in our back yard. More on that later!"

Quote: "M & S - Peanut Halberstadt D.II by John Walker from the September, 1977 issue of Model Builder. Motor peg has been moved forward on this plan per the suggestion in the article." 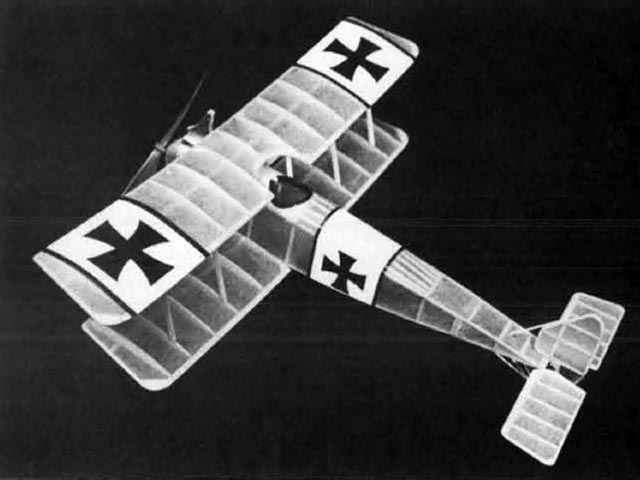