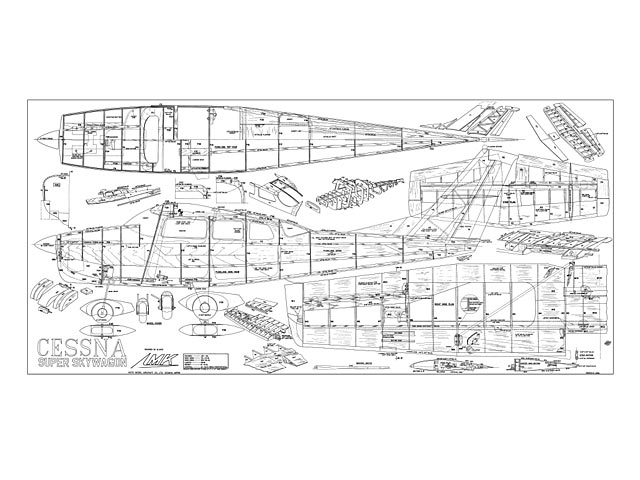 Kit from MK. Later sold in the US by Royal.

Quote: "The Cessna 206 Super Skywagon. A trip to your local Cessna dealer will reveal that there are three versions of the Cessna model 206: the U206 Super Skywagon (standard cargo, utility model with double loading doors), the P206 Utility (similar to the 0206 but with normal passenger door at front of the cabin on the right side instead of double doors), and the P206 Super Skylane (deluxe six-seat version.)

Further you will find the dealer has a great deal of literature and pictures. In his maintenance shops there are many manuals available with three views, exploded views, specifications and details, what s more, you are likely to find a real 206 somewhere around the airport and thus, if you are careful, should be able to exactly duplicate it for a true scale winner.

Before you glue anything, carefully unfold the plans and compare them with the scale data you've collected. Examine with detail every consideration. Are you going to incorporate flaps? Lights? Cowl flaps? Brakes? etc etc. If you are, now is the time to provide for them. Sketch in the additional requirements. Also lay out your radio gear and make plans for its location. A word to the wise here; if this is to be true scale, the radio must be hidden (ie Aileron and flap servos in wing, rudder and elevator under the seats, receiver and battery pack out of sight and so forth). Finally, notice the model has 654 square inches of wing area. The 8-9 lb figure for radio weight is based on older model radios which were much heavier than the new ones. The point is don't build heavy. The lighter this model is, the better it will fly. Nuff said?

Let's begin construction with the tail. Study the isometric drawings in the upper right hand corner of the plans. Glue R-1 to R-2 as shown. Use masking tape to attach the two parts of V-7 (on one side only) then fold it back, glue it, pin in position with tape down, and add V-3, V-4, V-5 and V-6 as shown. Install the 1/8 x 3/8 balsa ribs and top off with the other V-7 assembly. Glue V-1 and V-2 together but not to the vertical fin until after final assembly.

Build the stab by pinning S-9 in place and then add ribs S-1 through S-7, S-11 and finally two S-8's. When dry remove from the board, sand to shape and carefully add the 'skinss (made of two S-13's and S-14 joined together) without stress to insure no warp is built in. Finally, add the tips (S-10's) and when dry sand to shape.

Next step is the wing. Build each panel. Construct the center section and incorporate appropriate dihedral. Study the small isometric drawings of detail and decide what features, such as lights, flaps etc, to incorporate. These instructions will include scale wing incidence which, if used, should make a solid point for your scale presentation. Essentially, the incidence spoken of in the spec sheet works out to 30 of washout at the tips which is desireable since it contributes to stability and stall control.

Draw a centerline on ribs W-3, two W-4's and W-10. Cut the spars to length, glue the spar doublers in place and set the top spar aside. Pin the bottom spar in place. Pin W-3 and W-4 next to W-5 making certain the centerlines are parallel n to the work bench top. Now pin W-10 in place with the centerline inclined 3° such that the trailing end is W-10 and W-4 such that it will support each rib as measured. Be sure it is straight since it will determine the angle of remaining ribs W-5 through W-9. Do likewise, putting another strip from W-4 to W-3 which will support the remaining W-4's. Now carefully pin and glue all ribs W-3 through W-10 onto the bottom spar. Glue the top spar in place and add the 3/32 sheet trailing edge planking..."

Quote: ""This plan is from the old kit made by Royal of the beautiful and seldom modeled Cessna 206 Skywagon. It was one of the first kits made by this company way back in the early sixties. It is very accurate but not an easy model to build. Lots of pieces but fortunately, very well designed. I know it flies very well and it is worth building for all Cessna lovers. I developed the wing ribs as accurately as possible. The formers were scanned from the original kit. Good luck and best wishes, Eduardo".

Formers.
Instructions (from Royal kit), thanks to simmler.
Ribs. 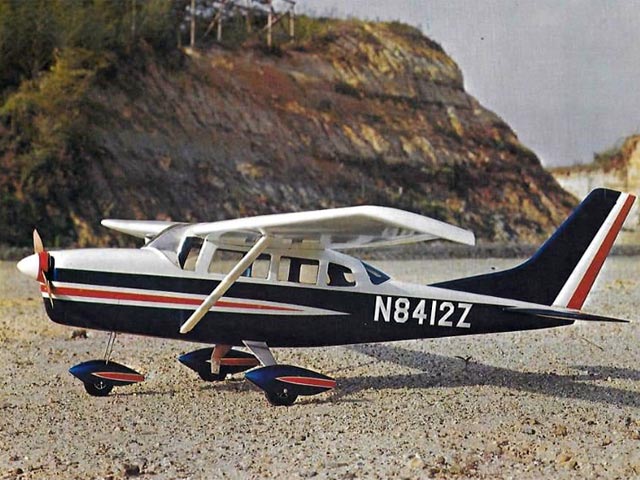