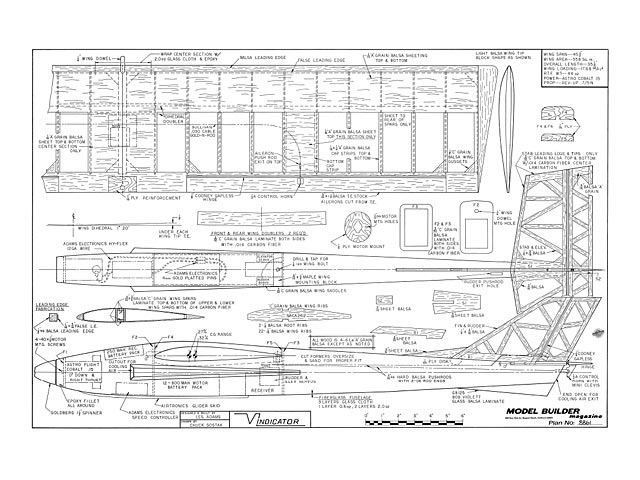 Quote: "Designed from the ground up. An Astro Cobalt .15-powered R/C electric beauty. Keep it light! A molded fiberglass fuselage is available. Vindicator, by Les Adams.

Vindicator is the result of many years of building and flying electric-powered aircraft. One day while flying my modified Astro Sport (oz12092) I was struck with an idea. What would happened if I stuck a Cobalt 15 in her, replacing the existing Cobalt .05?

The wing area was sufficient on my modified Astro Sport (46-inch span, 350 sq in) to support the increased weight of the .15 flight system. In fact, the weight would be about the same, if I installed Sanyo 800s, rather than 1200s.

A week later, the modification was finished and we were out at the field for the the test flight. All ground checks were made, the radio equipment was turned on and control sur-face checks made. The motor was 'throttled up' and the Astro .15 sprang to life. A few steps and a hearty heave and WOW! This is the way to go. The Astro Sport climbed for the blue. A little bit of flying to get the feel of the new power set-up and we started to see what she could do. Not too bad for a flat-bottom airfoil and no rudder control (this version of the Astro Sport was built with aileron and elevator control). There was ample power available for all maneuvers.

With the introduction of the Cobalt motor, it was quite apparent from the Astro Sport experiment that pattern-type performance could be had with an electric-powered aircraft if properly designed.

Proper design, as it relates to electric powered aircraft, means just one thing. KEEP THE WEIGHT DOWN! Of course, other parameters enter into the design, such as aerodynamics, drag profile, proper airfoil selection, power/ prop selection, but WEIGHT is the all important factor in the design of an electric ship.

Keeping these design parameters in mind, I started sketching out designs. The fuselage of the Vindicator was designed to fit the existing radio equipment and the Astro Cobalt .15 flight system. In other words, 'a place for everything, and everything in it's place.' After many sketches, the final design was drawn full-size.

Although pleasing to the eye, it was quite apparent that the radio and electric power support equipment would not fit the aircraft if the standard, built-up balsa fuselage method were utilized. The many compound curves and flowing design of the Vindicator dictated that a fiberglass fuselage be constructed.

My good flying buddy (GFB) Guy Negri is the local fiberglass expert. Guy's experi-ence in fiberglass molding spans many years. Knowing this, a phone call to Guy was made, and I started picking his brain on the process of fiberglass molding.

Many months later, the completed fuselage was popped out of the mold. Fuse weight was about 3-1/2 ounces. Not too bad for a finished fiberglass fuse. I had learned my lessons well from the master.

The Vindicator utilizes the time-proven NACA 2412 semi-symmetrical air-foil. The tail feathers are built-up of light 3/16 x 1/4 balsa with a bit of carbon fiber reinforcement in strategic areas. Power is the Astro Cobalt motor and 12 Sanyo 800 MAh cells.

Prop selection is all important in electric power and is just as critical as the weight of the model. The selection of the correct propeller wf I make or break even a well-designed electric model. The Rev-Up 7/5N or the Taipan 7/4 is a good starting point for the Vindicator. Both of these props perform well with the Astro Cobalt .15. I personally favor the Rev-Up 7/5N for sheer performance, but the Taipan 7/4 will yield longer flight times with a bit less pulling power.

CONSTRUCTION: Since the fuselage is almost finished as it comes out of the mold, we will start here.

Cut the wing fairing from the fiberglass fuselage using a fine-toothed saw. A straight cut is first made from the top of the fuselage, down through the sides, until you reach the lower camber of the airfoil outline. Then, with a small piece of the same fine-toothed sawblade, saw around the airfoil outline, following the lower camber from front to back of the airfoil, sawing gently and slowly. Once the fairing assembly is separated from the fuselage, trim along the upper camber line in the same manner. You will now have a fairing that will only require a hit of final fitting for a nice close fit over the upper camber of the wing, Set the fairing aside for the moment and prepare F2 and F3 formers by sanding them for a snug fit to the fuselage.

Be sure that you have allowed enough clearance for the motor brushes in former F2. The motor will have to be slid into the fuselage, with its brush holders orientated diagonally, to go through F2. Install the 1/8 plywood firewall next, making sure that you have 0 degrees down and side thrust. Fashion a fillet from 5-minute epoxy and micro balloons around the entire periphery of the firewall, F1, and formers F2 and F3. Make the fillet small, using the epoxy/micro balloon slurry sparingly..." 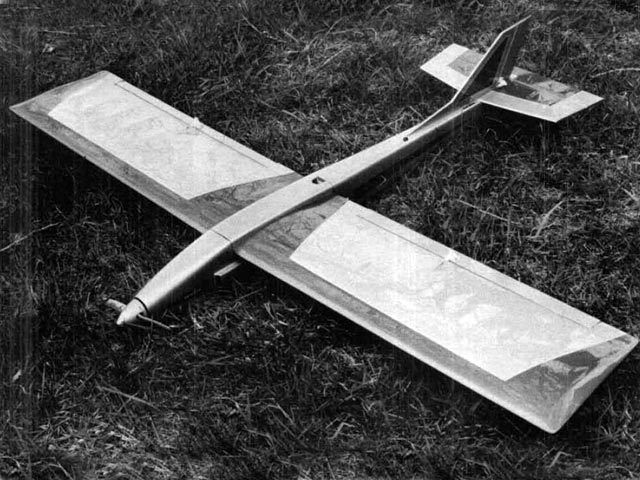