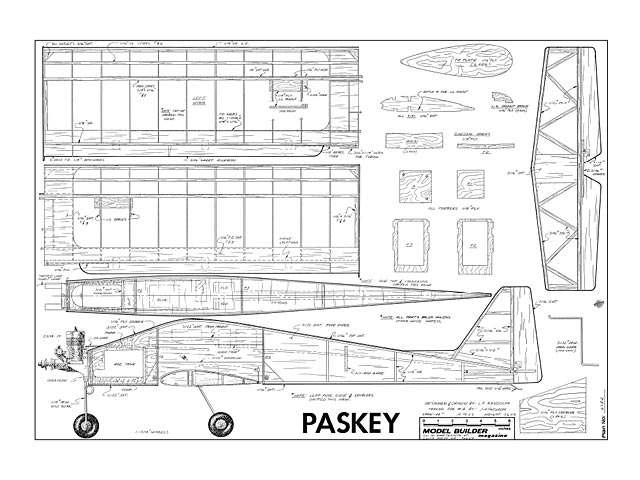 Quote: "All the performance capabilities of the hot .60-sized pattern machines have been wrapped up in this efficient 42-inch span .19 powered bird. Paskey, by Randy Randolph.

Last year our club, The Dallas R/C Club, instituted a plane-of-the-month and a plane-of-the-year contest, with a substantial prize to the winner at the end of the year. The first winner of this prize was a five foot .71 powered, standoff scale Gloster Gladiator, a beautiful ship and a deserving winner. I was witness to the test flight of this bird, and it was an interesting experience - to me, not the builder. The least exciting part of the flight was the landing; a wheel-landing preceded by a fifty-foot vertical dive. The airplane obviously survived, but my friend suffered from a bad case of intestinal interruption for some weeks after. Although the plane had been balanced to the indicated CG, it did not become flyable until the addition of two pounds of lead to the nose. It did become flyable, very flyable, for my friend also won the Southwestern Championships with it a few months later, against some of the toughest competition ever in this part of the country.

I use this story as an introduction because it contains several elements that will not be found in PASKEY. It is not an award winner, it does not cost an arm and a leg to build, it does not take three months to finish, it does not take a gallon of fuel for an afternoon's flying, it is not beautiful, but most of all, it does not require seven notches on a five-notch pucker string to test fly. On the credit side, it is easy to build, it looks kind of like an airplane, and it is a dream to fly. It will fly anyway you want it to fly; with the clevises in the outer holes, it is a nice and easy learning airplane for Saturday morning; with the clevises moved in for full control movement, it is a rough and tumble fun-fly contestant on Sunday afternoon.

PASKEY is a gentle airplane, and a forgiving airplane; it will snap, but it must be forced to do so, and it will spin very flat, but recover rapidly. Landings are a pleasure, for there is aileron control all the way to the ground, and takeoffs are simply a matter of advancing the throttle and giving a touch of back stick. Don't
forget the back stick, for this airplane has got to be flown; it will stay where you leave it, but you do have to leave it somewhere reasonable. In short, it is a stable, groovey aircraft with a wide performance envelope.

The tip plates are responsible for a lot of the performance; they provide low drag tips and help the built-in washout do its job of keeping the ailerons effective well into the stall. The square lines are not only easy to build, but the abrupt fuselage wing joint goes a long way in contributing to the excellent spin recovery. The somewhat ungainly fuselage gives excellent knife-edge flight characteristics, and the blunt trailing edges of the control surfaces tend to dampen response around neutral, which adds to the basic neutral stability of the design.

The original was powered by a rather old and well-established Webra .20, and it provides plenty of zip for all maneuvers, but this air-plane will handle anything from a sick .15 to a hot .23 and be happy. A .10 with the new lightweight radio gear would make a good trainer at a very low initial investment and small upkeep. With the Webra, a gallon of fuel will fly PASKEY for 9 hours and 20 minutes.

If you decide to build PASKEY, and I hope you do, let me suggest that you start by assembling.

THE KIT: Make a template of the rib from thin, stiff cardboard, and use it and a ballpoint pen to make a 'printed sheet' on two pieces of medium 1/16 x 3 x 36 balsa, moving the template around to find the most ribs that can be cut from each sheet. You will need 24. After the ribs have been cut out and gang-sanded to the same shape and size as the template, take four of them from the stack and cut 1/16 from the top and bottom of each - these are the center ribs that will receive the sheeting; call them R2. Cut the gear mount notch in four more and call them R1.

The trailing edge sheeting is cut from a single piece of 1/16 x 4 x 36 balsa. Cut the sheet to a length of 22 inches before stripping them, and the rest can be used for the center-section sheeting. The wing spars are stripped from a sheet of 3/16 x 3 x 36 medium hard balsa..." 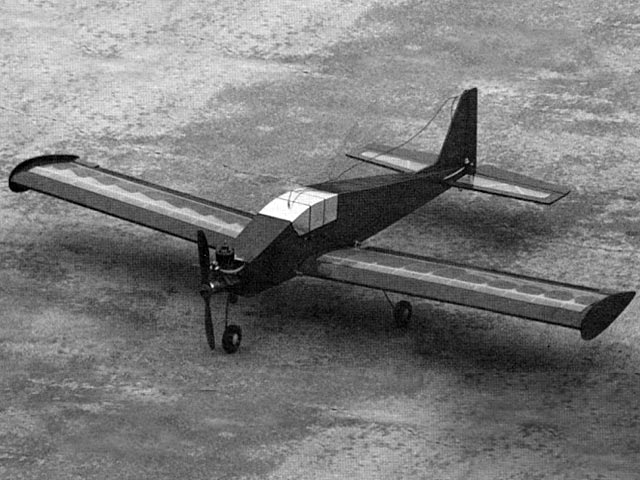