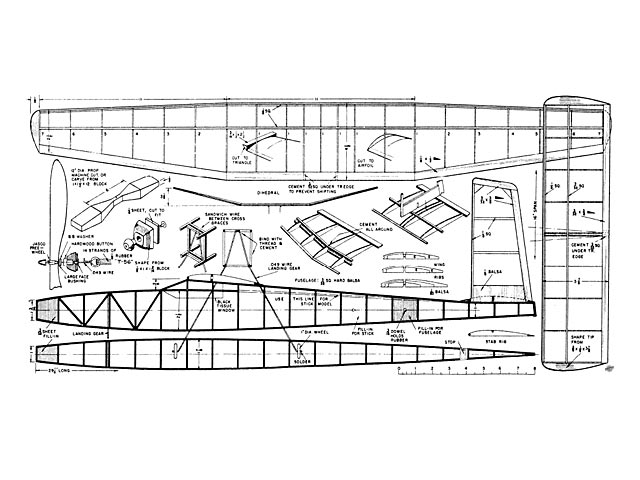 Quote: "Specially designed for group work, this quite husky little rubber-powered trainer may be built as either a cabin craft or 'stick type' model. Perky, by Old-Timer.

Fulfilling requests from Air Adventurers clubs, Air Scout groups, schools and recreation centers, Air TRAILS has prepared 'Perky' - the rubber-powered trainer which will get the novice air model fan off to a good start on his or her aviation career.

To every would-be modeler let us state most emphatically that it's far wiser to begin with a rubber model than to rush into gas-enginepowered operations. You'll be a better modeler for every rubber-powered plane you build. And don't let anyone tell you that such craft are too easy! You must learn to cope with strong bursts.

The fuselage sides are made of 3/32 square balsa. Build two sides one atop the other, using pins alongside the longerons to keep them in place. Do not pierce the longerons with the pins, for this will weaken them. The nose section is filled in with 3/32 sheet balsa - also the section which will hold the dowel. Note that the stick model dowel is located forward of the cabin model dowel. The stick model does not have a landing gear to help balance the model; therefore the rubber length must be shortened to hold the center of gravity position in approximately the same place.

When the fuselage sides are dry remove them from the plan. Leaving the rear section cemented together, separate the forward part and add the cross pieces starting from the front. Add the fill-in at the nose and double the cross pieces at the landing gear position on the cabin model. The gear is bent into shape over the plans and then cemented into .position. The nose block is now carved to shape. Use the fuselage as a guide and carve the plug from the fuselage to the nose button. Add the 1/8 sheet key to the back. This should fit the nose of the fuselage tightly. If a machine-cut prop is used, sand it smooth and insert the shaft and freewheeler and then the winding hook at the front as shown. The wheels are held in place by a small drop of solder on the axle or by a Sullivan Nylon wheel retainer.

Sand the entire fuselage with sandpaper block. Make sure every joint is securely cemented, for while sanding the surfaces some may have been removed. Give the fuselage a coat of dope and set aside to dry.

The wing is made next. Start by cutting the required ribs. Lay the leading and trailing edge and bottom spar directly over the plan. Then cement the ribs in place. When dry raise the tips to the dihedral angle shown with blocks while the center section is still flat on the drawing. Re-cement the leading edges again at the dihedral breaks. When dry add the top spar. This will serve as a dihedral brace. The tips are now carved and cemented in place. Sand the entire wing making sure that the leading edge and the trailing edge meet the ribs evenly or a poor covering job will result.

The stabilizer is made in the same manner as the wing except that there is no dihedral and only a top spar is used. The two center ribs are spaced apart the thickness of the rudder so that the rudder can be sandwiched into position. The rudder base is 1/8 sheet balsa; note that the grain runs perpendicular. Build the rudder directly over the plan and do not remove until the cement is thoroughly dry, or warping may occur. Sand the rudder smooth and re-cement any joints that may have been weakened.

Cover the fuselage first using light Sky Sail tissue. When covered, wet the tissue with water and set aside to dry. Avoid using rough handling while the tissue is wet. The wings are covered in six pieces to insure a perfect covering job. Water is used here to tighten the tissue also. Cover the stabilizer top in two sections. The bottom can be covered in one. Next the rudder is to be covered. When covering the rudder do not water or dope this surface as it is covered on one side only and due to the fact that it is thin, warping would occur. Mix up some deaf dope with 50% thinner and add about 12 drops of castor oil to an ounce of solution. This is done to prevent any warping of the surfaces. One coat should be sufficient for the wing and the stabilizer. The fuselage can be given several coats for this will have to take the strain of the tightly wound motor.

Make up the motor with no slack between the dowel pin and the loop in the prop shaft. Fourteen strands of T-56 will be ample power for this model. Spread rubber lubricant over the rubber motor and work in well to keep the strands from cutting each other. Glide the model with the wing in the approximate position shown. If the model stalls, move the wing back. Wind the motor to one full row of knots and hand launch the model into the wind. If the model stalls under power add a little down thrust. This is done by inserting a sliver of wood between the top of the nose plug and fuselage, pushing the shaft downwards. Now the model may want to fly to the left (looking from the rear), so add another slab to the right side of the plug. Add these small pieces until the model circles to the right and then add turn with the rudder for a glide to the left. While adding these pieces tack cement 'em in place, for the vibration may loosen them in flight.

By adding off-set to the power and tightening up on the left circle, additional down thrust may be required to keep the model from looping. Gradually add turns until the model is really getting high by stretching the motor five to six times its normal length and then starting winding and slowly walking toward the model. Most winds can be stored in this way. There should be some give while the rubber is being wound. Stay out and wind approximately 50% of the turns and then wind and walk in. This all must be done as quickly as possible, or rubber will become fatigued."

Quote: "Hi Steve and Mary, Here is an old timer I think done by the Air Trails staff. I do not know if this model has been submitted before. First published Air Trails October/1952. This rubber powered model has also appeared in Air Trails Issue of Classic Flying Models, FALL/ 1979 but the bottom of the drawing was clipped so that the left half of the plan view was missing. The article had a two page ISO that I spliced together and removed so that it stands alone but is included as a separate page. The article is not as published for the ISO and the approximately 1/3 gray scale drawing were not included. The stand alone drawing is presented as a full size monochrome drawing. The wing span is 33 inches. Gene" 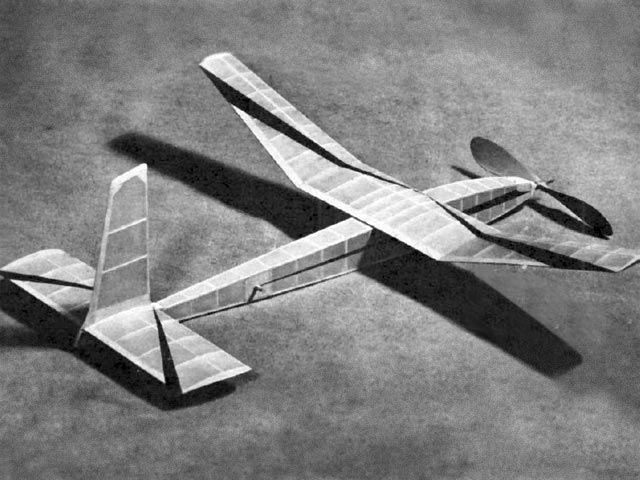