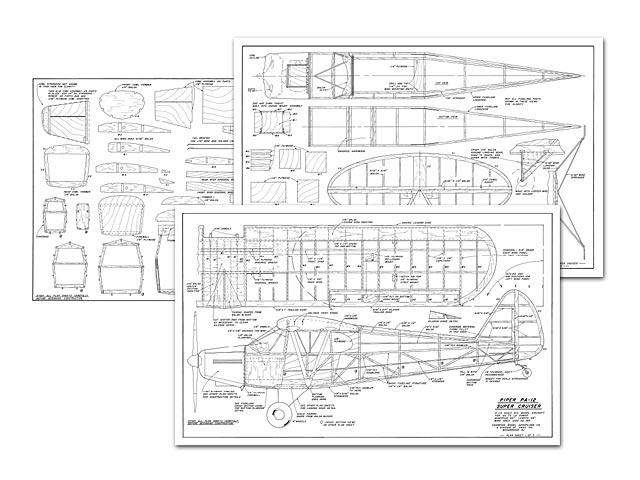 Quote: "The Piper Super Cruiser brings back the nostalgia of the late 40's. Four cycle engines provide majestic scale like performance. A realistic cabin structure is possible by the use of a hidden 1/8 inch wire structure in the corner posts. This supports the front dowel plate and wing. Kit contains quality balsa, hardwood and plywood. Precision machined and die cut parts."

Yes it's a Piper, but no, its not another J-3 Cub. The Piper J-3 Cub must be one of the most modeled aircraft in history. The Cub is a great airplane, but for a change, the Piper PA-12 Super Cruiser has a lot to offer. I've always preferred the lines of the Cruiser's wider cowl, enclosing the engine rather than having the cylinders exposed in the breeze. The wider fuselage changes the appearance from the J-3; the Cruiser appears more compact and closer coupled. One thing that doesn't change is the relaxing, stable flying qualities.

A little history: The PA-12 Super Cruiser was one of Piper's first new models after World War II; it was developed from the pre-war J-5 Cruiser and the first production PA-12's rolled off the line in 1946. Between 1946 and 1956 approximately 3,800 of the three place Super Cruis-ers were produced before Piper switched over to the four place PA-12 Family Cruiser. The PA-12's came with a Cream and Tennessee Red paint scheme.

Piper's development continued; the PA-14 Family Cruiser led to the PA-16 Clipper and then to the Pacer and Tri-Pacer series. For the scale modeler, there is plenty of scale documentation and 3-view drawings available for the PA-12 Cruiser. Two sources are: Scale Plans and Photo Service, 3209 Madison Ave, Greensboro, NC 27403 and Paul R Matt, PO Box 33, Temple City, CA 91780.

I like the Super Cruiser and got involved in this 1/5 scale project when its designer, my friend Bob Peru, asked me to finish and ink the plans. I ended up covering and painting the prototype model, installing the radio gear, and doing the test flying. This is a fun project, particularly for the scale enthusiast. The design is exactly to scale and detailing can be added to suit the builder. It's large in size - but not too big - which makes it easy to work on with plenty of room for the radio gear and any scale cockpit detail desired.

The wingspan is 85 inches, with 1040 square inches of wing area. Suitable for .60 to 1.2 four cycle power, the prototype used a Saito .90 four cycle twin cylinder engine. It's a rugged model, and the light weight of only ten pounds with a good painted finish surprised me. This is a scale project, not intended for an inexperienced modeler. Not hard, it just calls for careful workmanship; it is a fully built-up framework with not much sheet wood used. All part templates are on the plans, and I suggest cutting out all the pieces before beginning construction.

Construction: Let's start with the wing. It's made up of three sections, two panels and a center section, joined with plywood dihedral reinforcements. Before sliding the ribs in place on the spars, trim the spar ends to shape to accept the wingtip pieces. Be sure to locate the shorter ribs outboard in the wing sections for where the ailerons go. Use waxed paper over the plans and pin the ribs down to locate them. Balsa spacers 1/16 inch thick, are used under the ribs to permit the later addition of the cap strips on the bottom surface to be flush with the trailing edge. The trailing edge can be pinned down to the building surface. Add the laeding edge, wingtips, top leading edge planking and capstrips before removing the wing panel from the building board. Note: the wingtip outer edge is blocked up one inch above the building surface.

With the panel turned over, the bottom planking and cap strips can be added. Both wing panels are joined to the center section with the plywood braces and the wingtips blocked up for the proper dihedral angle. The ailerons are built separately over the plans and hinged to the wing panels. Standard right angle nylon bellcranks are used for the aileron linkages. Plywood mounts hold the bellcranks and balsa sheeting is used on the bottom surface where the pushrods extend to the aileron hcirns. Cut out the center section of the wing as necessary for the aileron servo and use a plywood plate for the aileron servo mounting.

Fuselage construction is certainly different if you're used to slab sided box construction. First step is to build up the two lower sides from square stock; for clarity, the lower side assembly is shown separately on the plans..."

Quote: "Hi, Outerzone. Here's a PDF of the construction article for Bob Peru's Piper Super Cruiser, the plan of which you've just posted the last day or so.
Built one of these from the newly released Champion kits. They made an excellent kit, with all parts, except stringers, expertly and accurately cut to perfect size and shape. While there were some tricky parts to the build, it all turned out well. Flew fine, although as a mild mannered full size plane, the model flew that way as well. That was especially good since the engine I used, as Saito 90 twin, was horrible and the pinnacle of unreliability. Brings back old memories. Cheers," 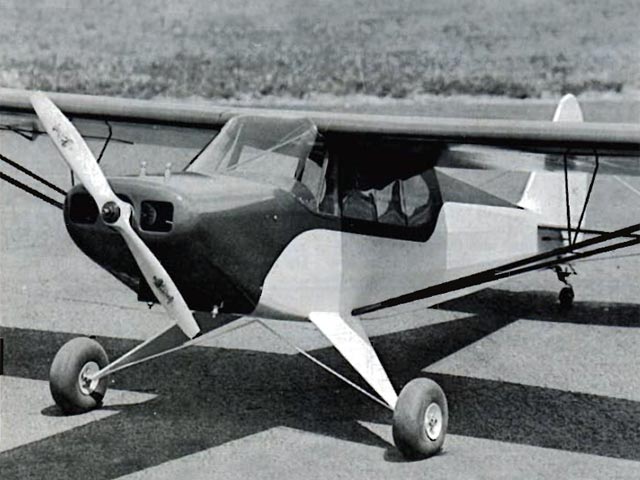 Built one of these from the Champion kit when they first were released. Powered with a Saito 90 twin. Very nice kit with precisely cut, perfect fit parts. Plane flew well although it didn't do much other than stooge around. Great for realistic touch and goes.
Matthew Stikeman - 08/10/2020
Add a comment