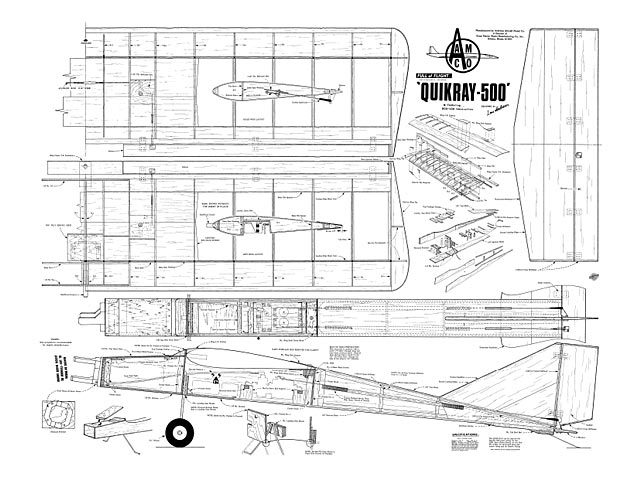 Quote: "The Quikray 500 has been engineered to meet the need for a model that could be built fast, strong and meet the requirements of AMA Sport Pylon racing, Quickie 500 Pylon racing, Fun Fly events and for all around sport flying - trainer flying and general pattern events.

Important pre-work hints: Remove all die-cut parts from the die-cut sheets and orient the parts with the plan. Note that for die-cutting reasons, some parts on the sheets are not die-cut completely and must be continued with an X-Acto modelers knife or razor blade before removing from sheet.

Check all trailing edges, leading edges etc for straightness and if necessary, straighten them by passing over steam for a long enough time to soften them a little, at which time you should bend them in the opposite direction and a little bit further and hold till dry.

WING:
1. The wing has no dihedral and can be built complete on the work board that can handle it or the wing can be built in two halves and joined together after. These instructions refer to the complete wing.
2. Cut both left and right wing drawings from the plan and tape together so the center line of both wing plans are right over each other. Also, check by sighting or using a straight edge such as your work board to insure that the two wing plans are straight across the whole leading edge. Tape the plan to the work board and tape wax paper over the whole wing plan to keep cement from sticking to the plan.
3. Prepare the main spars, leading edge and trailing edge by cement-ing their respective center ends together and cementing the balsa ties to the main spars and the plywood ties to the leading and trailing edge. NOTE: be sure that the ties are centered on these parts inboard and outboard. Be sure also that these assemblies are straight for the total length by cementing the ties while these assemblies are on the board.
4. Pin the main spar (bottom) to the work board with the tie for-ward. Be sure the center of the spar is dead center on the wing plan. Cement the two R1 center ribs together and cement two R2 riblets to each side of the front of the two center R1 ribs. Refer to the wing cross section drawing for reference! Refer also to top wing drawing!
5. All of the R4 ribs have the slot for the aileron bellcrank bed die-cut into them for die layout purposes but only two R4 ribs with the slots removed are needed on each wing panel. The slots in the rest of the R4 ribs can either be cemented and left in place or removed.
6. Cement all of the ribs into their respective places onto the bottom main spar. Pin them in place and be sure they are vertical and on the lines on the plan. Cement and pin the leading and trailing edge to each rib and also cement the top main spar into each rib slot. Cement one plywood bellcrank bed into the slots of the two inboard R4 ribs on each wing panel. Cement and pin the top leading and trailing edge sheet in place. NOTE - fit and cement only the top rear center section sheet in place at this time! Leave the top front center sheet off..." 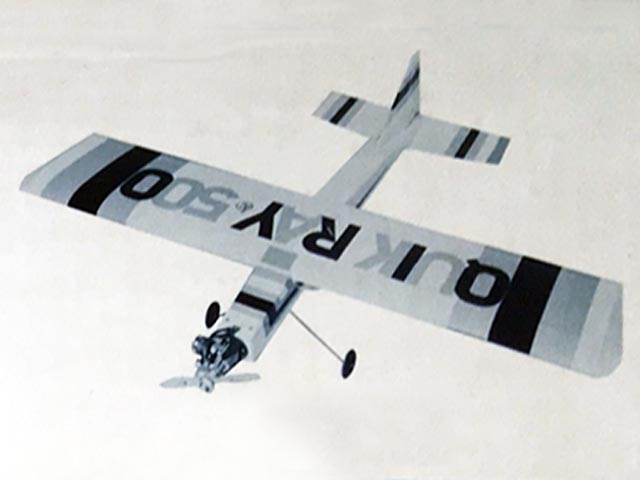