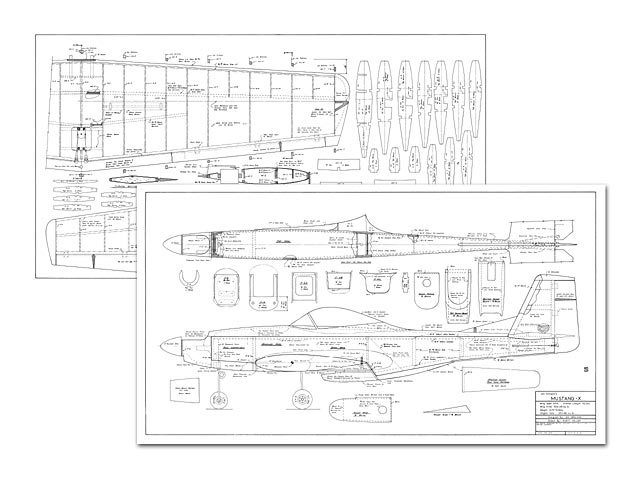 Note this plan is derived from the raw scans posted on RCGroups by gltruett (see datafile). Here the plan has been aligned and cleaned, dirt and paper creases removed, then saved as a 2 colour bitmap at 400 dp, thanks to Pilgrim.

Note this here is the Mustang X as published by MAN in Dec 1972. The Mustang X was also later kitted by Southern RC with a foam wing, rather than the built up wing shown here. For that plan (or, at least, a badly butchered version of it) see Mustang X 60 (oz8416) but be aware we advise great caution.

Note colour photo of completed Mustang X model [main pic] by burtona was found online at https://www.rcuniverse.com/forum/classic-rc-pattern-flying-379/11351050-mustang-x.html that thread is also worth a look for the link to a 16mm film on youtube which includes a clip of the original Mustang X (Miss America) being flown by Jim Kirkland at the Chicago 1972 Nats, see https://www.youtube.com/watch?feature=player_detailpage&v=60NYhU7kq8E

Quote: "A 502 square inch, 40 to 46 powered Pattern model that is fully competitive in any class of competition! That is a proper description of the controversial Mustang-X that has surprised, astounded, and angered a good portion of the top flyers in the US since its contest initiation at the 1971 Nationals.

What started out as a follow-on to previous experiences with smaller-than-average models, seems to have helped in the creation of an age-of-the-.40's atmosphere among much of the R/C modeling public. How permanent, and how deep-seated is this atmosphere will certainly be an interesting phenomenon. Even now some things are certain about these smaller-than-average models. For one thing, their physical size is a welcome advantage in the workshop, home and means of transportation. Overall economy in both building and operating, and a considerable reduction in engine noise level, cannot be ignored. Because they use up less sky than their .60 powered counterparts, and fly smaller maneuvers with very little apparent difference in speed, flight time for a full pattern is reduced. The results are more flights per given period of time and less friction on the judges' neck joints! It stands to reason that this should make for happier people all around, and increase the pleasures of this hobby-sport!

With all these plus factors going for the .40 sized Pattern model, one may well wonder why it is not already the dominant model on the contest flight line. Well, this size of model is, and for a long time has been, the mainstay of the average Sunday-flyer, the majority of R/C'er's. Probably the main reason for lack of interest among the top flyers is the scarcity of engines in the .40 to .46 size that possess the rock-steady idle and low/vs high speed ratio of power available in almost every .60 size engine on the market today. Top off this scarity of good .40 to .46 size engines with the almost total lack of a commercially available proper size prop (10-7) to match what few engines are available, and the problem of top competitors begins to make some sense with respect to this size of model.

The introduction of any new concept in modeling always has been plagued with problems and this smaller-than-usual size Pattern model is no different. How many can remember the lack of hardware availability with the advent of strip ailerons, the serious lack of .60 size engines and proper props, when we started overpowering our then-popular .45 cu in engine powered Pattern models; the lack of reliability, and hardware, for retract gear units (still somewhat unstandardized), and many other radical departures from what was considered normal at the time. In each case the hobby industry has responded in outstanding fashion, and today all R/C'er's benefit from what is now considered standard, but that was very much un-standard yesterday.

Let's consider the design history of the Mustang-X and see how this concept evolved and why it deserves more than a 'how cute' remark. The birthplace of the concept would have to be described as being submerged in the .40 sized Goodyear racers, since this is where certain performance characteristics of considerable advantage to Pattern flying were first noticed with the smaller model. In late 1969, a small .40 powered version of the popular Citron design was built and powered with an O.S. Max .40. This model, at 506 sq in and 4-3/4 lbs, of very simple construction, had absolutely amazing capabilities in performing Pattern maneuvers of all types. Yet the model was docile enough with .29's and .35's for most any semi-skilled flyer. Since the model was designed for just plain fun flying, yet performed precision maneuvers well enough to win a couple of contests in the Expert class, further thought had to be given to this size model in a strictly competition sense. The result was the Mustang-X.

In designing the Mustang-X, first determination was that it would be, from the ground-up, a full competition airplane. A long-lasting love affair with the P-51, as evidenced in the Beachcomber (oz7780) and Citron (oz9711) series, surfaced again, deciding the shape of the design. Since our rules make a three-wheeler imperative in order to gain absolute top points on take-off and landings, the model had to have trike gear, thus the 'X' after the Mustang. Who had ever heard of a tricycle landing gear on a P-51?!

Next came the major problem, retracts! Aside from the fact that retracts were now a competition necessity, this model might be a Mustang-X on the ground, but once airborne, with the gear tucked away, it could drop that 'X' and have a true P-51 appearance! This retract thing turned out to be the hardest problem of all, since at the time there were no commercially made units small enough to fit into a model of this size. Commercially available units are now available in small enough packaging, so if you want retracts the problem has been solved for you by a 'gung-ho' hobby industry.

The stabilizer utilizes the diamond shape that has been thoroughly proven on the Triton and Intruder designs; only the wing is slightly different from that used on my past designs. The airfoil is still 15 percent, but otherwise it is progressive in airfoil shape and center of lift from center-line to tip. The center is symmetrical and the tips are a lifting, slightly reflexed, section. These changes were made because of the reduction in wing size with a retention of wing load-ing comparable to the standard .60 sized competition model. The effort was to match the larger wing's performance parameters even though the Reynolds' effect increased because of the reduction in wing size, especially at the tips. The results were very satisfactory. At high speeds there is no tendency to snap-roll unless induced by abrupt application of full elevator, rudder and ailerons, when model is set-up for current competition Pattern flying. At the same time the model has demonstrated excellent low speed characteristics in wind. Those who witnessed a power-off, glide-stretching, dead-stick landing at the '71 Nats can attest to this virtue of the design.

The model was first flown with a Max .40 engine and a 10-6 Top-Flite prop. At 5-1/4 lbs, two things became immediately apparent. Number one: the extra 1/2 lb over the Little Citron's weight of 4-3/4 lbs made the top-hat maneuver a small problem, unless the .40 was delivering top RPM and horsepower at the time the maneuver was started. Number two: there was enough of a drop-off in speed when doing looping maneuvers that torque became a problem.

A hurry-up call to John Maloney at World Engines produced a Super-Tigre .46 just 10 days before the '71 Nats. This engine had plenty of power, even in reserve, and cured the top-hat problem, but was troublesome at idle with the small 10-6 prop, and the torque problem in loops was still there to a bothersome degree. A quick cut-off of 1/2 inch on both ends of a Top-Flite 11-7 really opened things up! The model moved better and there was no problem with any of the maneuvers.

The next step was to cut down some Top-Flite 11-7 props, re-shape and thin out the blade tips to a normal configuration instead of that club-ended 10-7. The engine had a higher RPM, but I could not see any major improvement in maneuver performance. Also, idle became a problem again, apparently due to lack of fly-wheel action from the thinned out prop tips. Time was growing short, so back to the club-ended 10-7 Top-Flites for the Nats. Only one stoppage for the entire Nats week, and more adjustments on the engine after the Nats, cured all idling problems with both types of 10-7 props.

One feature of this size model that cannot be overlooked, nor over-emphasized, is its ability to frame a maneuver much better than the .60 size over-powered bombs so common today. In today's competition, loops have become more like orbits, top-hats are high-hats..." 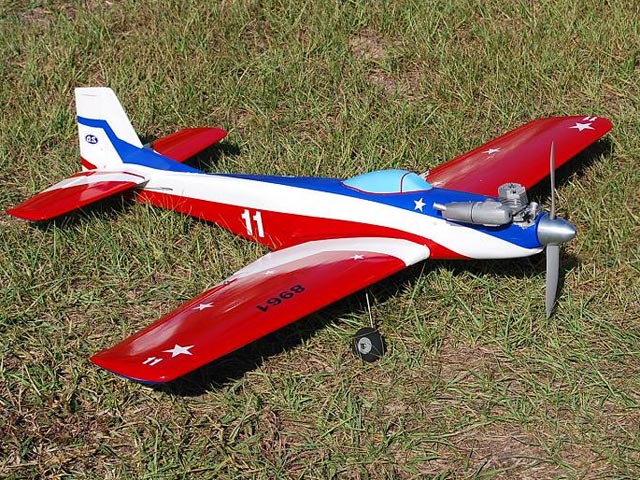