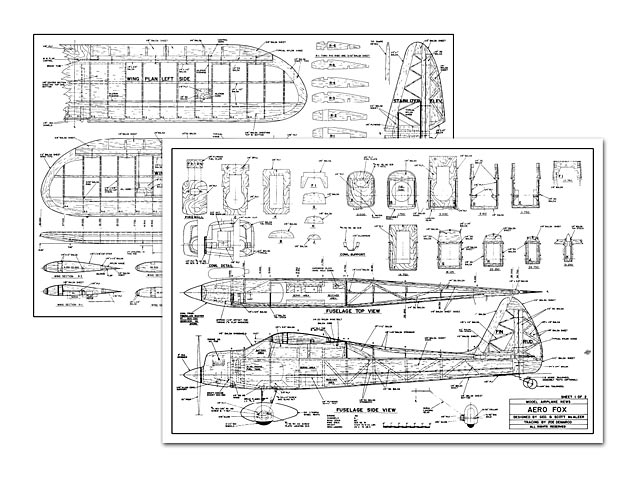 Quote: "My son, Scott, now seventeen, learned to fly R/C four years ago. After two seasons with an underpowered basic trainer, which Scott learned to handle extremely well, and a season of a sport-scale Piper Tomahawk with totally unpredictable behavior, which he also learned to handle well despite its shortcomings, it became obvious that if his flying was to advance, he'd need a fast, maneuverable and stable advanced trainer.

After deciding that none of the kits suited our needs, we chose to design our own advanced trainer, including all the features we considered desirable, including the sleekest lines we could think of

Over a period of several weeks we compiled a list of these desirable features: a high wing for stability, good maneuverability, adequate power, a tail-dragger with a wide tread, semi-symmetrical airfoil, washout, and flaps. To improve performance and esthetics we included in our design a low profile, low frontal area, wheel pants, a fully cowled upright-mounted engine, and slightly upturned wing tips. To mount the engine and to fully cowl it, to reduce drag and improve cooling, we lowered the thrust line until the engine would totally fit within the cross-section of the fuselage. The method of construction would include everything we'd learned up to that point.

We made sketches, refining the design each time until we liked what we had. We already had an OS 40 FSR engine, so the AeroFox was designed around that en-gine.

The AeroFox was ready when the flying season opened in the spring of 1985. Even with his somewhat limited experience, Scott decided that he would test-fly it. After double-checking every-thing, alignment, trim, etc, and deciding it was as close to perfect as possible, we headed for the flying field. The first day was windy, so we made only two fast runs across the length of the field, lifting off only about a foot and then setting down again. It lifted off in grass at quarter throttle, and seemed stable and flyable.

The next visit to the field, the AeroFox was fired up and lifted gracefully into the air. He climbed to a couple hundred feet then made the necessary slight adjustments to the trim. To our delight and amazement, the AeroFox flew superbly, as we'll fully explain later. The balance had worked out perfectly, and to this day the only modification necessary was to increase the aileron movement slightly. Otherwise, from the first day the AeroFox has performed admirably.

As mentioned before, the AeroFox was designed exclusively around an OS 40 FSR engine, and while the finished AeroFox weighs 6-1/2 pounds, the 40 FSR propels it at an amazing speed and provides ample power for aerobatics. With one exception, a larger, or different engine may not fit within the close-fitting cowl. As the 1985 flying season drew to a close, the AeroFox had completed 70 successful flights, each averaging about 15 minutes. This adds up to 17-1/2 hours flying time. The 12-ounce fuel tank will, depending on the type of flying, give between 20 and 30 minutes of flying.

We have since built a second AeroFox, used primarily for the construction photos, and have reduced the weight slightly. We also have found that an OS 45 FSR and FSR ABC are dimensionally the same as the 40 FSR. The new AeroFox uses the 45 FSR ABC, and with the 20% increase in power, and the lighter weight, the results should be interesting when the 1987 flying season arrives.

CONSTRUCTION: In general, the construction of the AeroFox is conven-tional. There may be a few areas that require some clarification, but, for the most part, there should be no problems.

The fuselage sides are built right on the 1/2-inch-thick balsa sides. The location of the 1/4-inch-square balsa strips are shown in the small detail on the plan. Be sure to make one left-hand and one right-hand side. Add the 1/16-inch-thick plywood doubler to each side. Glue the two 1/2- inch-thick plywood bulkheads (#C and #F) in place first. The sides are parallel between #C and #F. Complete the construc-tion between #C and #F, and add an extra 1/4-inch-square balsa cross-piece at the top at #E. This will help hold the sides parallel when the tail of the fuselage is glued together, and can be removed later when the fuselage is completed..." 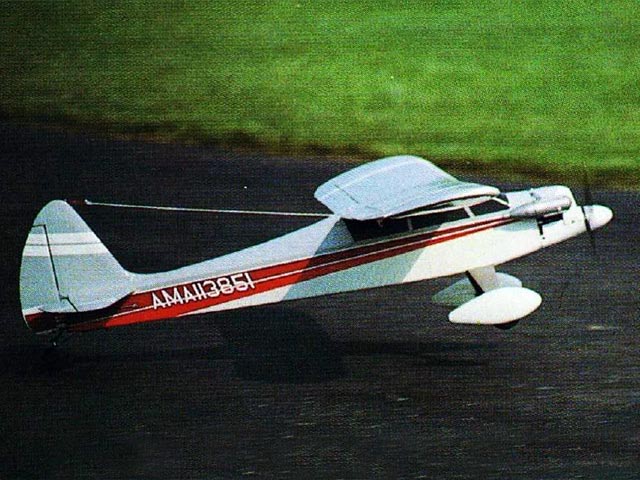