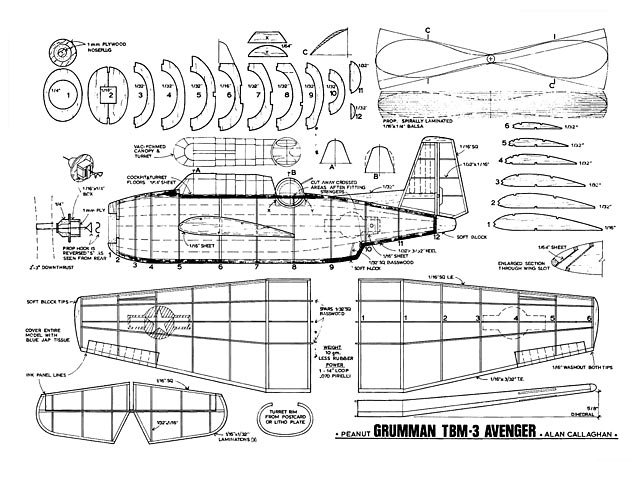 Quote: "Peanut Avenger, by Alan Callaghan. Veteran Peanut builders will get a kick out of building and flying this WW-II torpedo bomber. Intricate canopies and unusual wing slots are the challenges of the Peanut Avenger.

Although the Avenger is not really suitable as a beginner's model, the work involved is not too difficult given that some experience has already been gained in handling the small sections of timber shown on the plan. Basswood is a delight to work with, and is stronger than balsa when compared size-for-size without being significantly heavier in the thicknesses used on this model.

The trickiest part of construction is the rear turret area, and the following notes should help.

After building the keel (shown shaded) flat on the plan, together with one set of half-formers, fit the 1/16 sheet root rib, remove the structure from the plan, and fit the other half-formers and root rib. Check that when seen in the plan view, all the formers are at 90 degrees to the keel. Stringer notches are not shown on the formers because cutting these before assembly usually guarantees that the stringers will finish up in wavy lines.

Once the keel/former assembly is complete, carefully sand all the edges of the formers with a wide sanding block while sighting along the fuselage fore and aft, making sure that the curved edges of adjacent formers blend well. You may damage a former as you sand, but simply glue it back in place and carryon. Have the Hot Stuff handy.

Working on one stringer at a time, and using the dotted lines on the plan as a guide, stick a piece of drafting tape along the length of the fuselage - letting it follow a natural line - and put a mark on the edge of each former where a notch should be. Take a small piece of fine glass paper, fold it double, and using the folded edge, file in the notches on the marks holding each former as you go along. Practice getting the notch to match the size of the 1/32 square stringers on a piece of scrap balsa first if you like. Remove the tape and glue in the stringer. Repeat the process on the other side and always work in matching pairs. It takes longer to describe this technique than to do it, but the end result is far better than precutting the notches.

The two uppermost stringers should align with the top edge of the main keel when seen in side view, so that the cockpit floor can sit flat on all three members. Install the front floor after all the stringers are in place, then cut away the relevant part of F-8 and the keel where the rear turret goes. Install the turret floor between the next two stringers and add parts 'X' and 'Y'. Obviously some careful fitting is required, so please do not rush! Sand the area very carefully and then add the turret rim. Other parts of the fuselage are straightforward. The chin to the lower turret is simply two pieces of soft 1/8 balsa glued to either side of the keel. The keel should be cut away here, too, as shown on the plan. The glazing here may be omitted if you like as it allows access to those broken motors. You never break them? Glaze it!

The wing slots may be omitted to simplify construction, but they do seem to work quite well in stabilizing the model in flight. Do not forget the 1/16 washout (ie trailing edge raised 1/16 inch) on both wingtips. I find the most consistent method is to twist this into the finished, covered wing using dry heat, not steam, in front of an electric fire. Steamed warps have a habit of losing their settings when the weather changes, and in the UK, change it does!

Dope the airframe at least once with a 50/50 mixture of dope and thinner, and lightly sand before covering. Blue, natural Jap tissue was used on the original with two further coats of the same 50/50 mixture to seal the surfaces. The covered fuselage can be heavily steamed before doping to get out any little wrinkles in the tissue.

The canopies are vac-formed in the lightest acetate sheet you can find. A good artists' material supplier should have suitable thicknesses as used for covering presentation drawings, etc. A Mattel unit or similar home-made device working from a vacuum cleaner should make this reasonably easy. Carefully trim the canopies to sit neatly where they should on the tissue covering and the turret floor. Fit any cockpit details now. Once the main canopy is made to fit well, hold it in place at the rear using a strap of masking tape strapped over while you run a thin line of full strength dope around the front half where it touches the tissue. Leave it to dry a good 10 to 15 minutes, remove the tape, then apply the dope at the rear. Using this technique, with a well-fitted canopy, you should get absolutely no indication of how the thing is held on when the model is finished. Glazing bars on the original were blue tissue strips doped in place.

National insignia are cut as solid blocks from a darker shade of blue tissue and doped in place. The white star and bars are added in matte enamels, as are all the other white markings. For full colour details, the Airfix 1:72 scale kit was used as original reference, but alternative documentation on the Avenger should be quite plentiful.

The original prop was spirally laminated from balsa as detailed on the plan, carved to a very thin section, and tissue covered. Lightweight commercial props may be used, but will probably benefit from having a little extra pitch tweaked in. No freewheel device is used - one of the more subtle aims of indoor flying is to always land with only one turn left on the motor! If you make yourself the reversed 'S' hook as shown on the prop-shaft, you will never again have problems of the rubber winding up the shaft.

The original model weighed just under 10 grams ready for flight, but without rubber. Every peanut built from the same plan will be different, and with a more challenging type such as this, even more so. Therefore, as a loose guide to flying trim, keep the balance point well forward and do not try to make it fly too slowly. Airspeed helps the slots to work more effectively. Ballast may be put inside the front fuselage with a small balsa spatula, and the rudder can be hinged with fine wire to aid trimming even more. Start with the downthrust shown on the plan, and with a few test flights on a weak motor, see which way the model naturally wants to turn. The original was happiest turning to the right, and used a 12-inch loop of .070 Pirelli with about 1000 turns. More motor should only be tried once the trim is consistent.

If the model turns right happily under power, but seems to fly 'downhill' in a steepening trajectory, gradually decrease the nose weight and bring the balance point back, but maintain the same elevator setting. The model may then seem to want to stall on the initial climb and drop the outboard wing in the turn. If you can gently add a little more power you should be able to get it to pull 'over the top' of this stall, and a tiny piece of clay on the inboard wingtip should help stabilize matters.

All of the flying surfaces are true to scale. This was one of the attractions of the Avenger as it has generous tail areas, nicely proportioned moment arms, and generous dihedral. If you insist on it, an undercarriage could easily be fitted, but the challenge of the exercise from, the designer’s point of view, was to get the model to fly without it. When the original managed smooth, stable flight on its first day out, it all seemed very much worthwhile. Conversion to a Campus A-23 would not be difficult at all. I have not tried it yet, but if you tackle it either way, best of luck!" 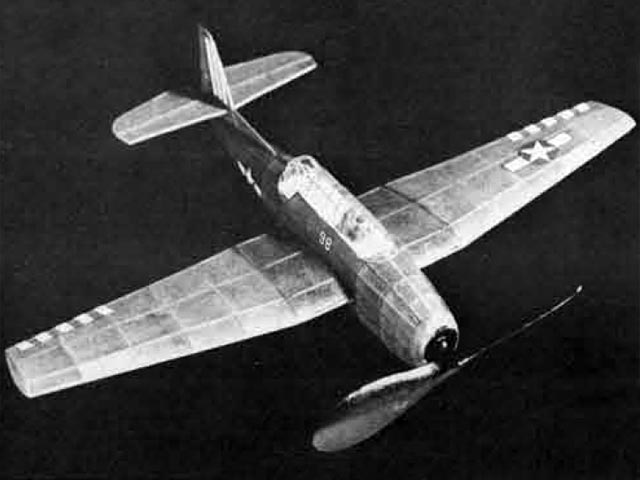