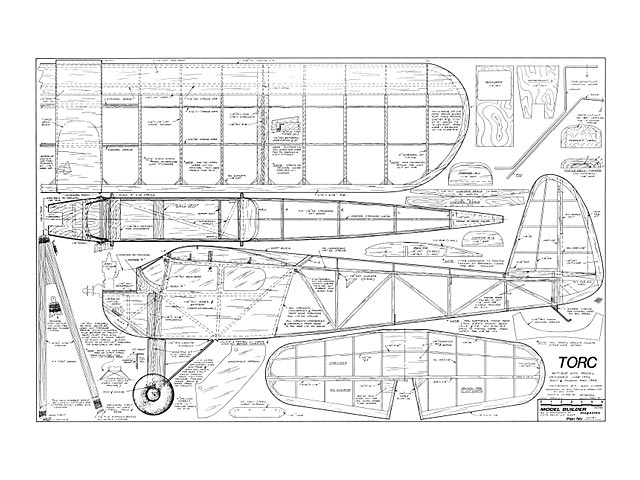 Quote: "Torc, by George Clapp. Here's an R/C trainer that was designed over 40 years ago! Today's engines may be more powerful and modern adhesives may be more permanent, but functional beauty remains the same.

The day is perfect, with warm sunshine and almost no wind. After some test glides over tall grass, I was quite sure my first gas powered model was ready to taste the air currents under the power of its Baby Cyclone engine. The Cyclone had run well on the bench before installing it in the ship, but today all we can get out of it is a pop now and then. My buddie's wife and mine are getting impatient, as it is also Sunday, with noon almost upon us. So we have to give up, muttering to ourselves.

The very next time out the Cyclone is ready, for some unexplain-able reason. It roars into action almost on the first flip of the prop. Conditions are not as good this day, for there is enough wind to cause considerable drift and there are trees in the area. Oh well, we hand launch it into the wind anyway. The model climbs out in big circles, with only a minor scallop to its flight. As it circles, it looks like the climb will take it over a tall tree which it is drifting towards. The Austin timer now decides that the Cyclone has run long enough, the plane straightens out, and the long flat glide allows it to stay up for a considerable time, in the top of that tree!

This all happened about forty years ago, and as I remember, the model more often than not, ended up entangled in tree limbs. If you have ever flown a big free flight model and know the sickening feeling you get as it tumbles down from limb-to-limb after repeated prodding, you will really appreciate radio control. While the Baby Cyclone was probably as good as most engines of the day, and we now look back with nostalgia, it does not in any way compare with the easy-starting modern glow engine without ignition problems.

After a phone conversation with Bill Northrop in regard to my Fokker Trimotor (oz5238) from August '76 MB, during which he stated that old-timers make great trainers, I began to think about my old gas job done again, this time as a trainer. After several kits of so-called trainers, I still needed one slow enough for these old reflexes. My TORC trainer presented here is the results. The name TORC, of course, is
OT R/C scrambled a little.

The first flight of TORC was a revelation of simple R/C flying. Its takeoff was at 1/4 throttle, the balance was just about perfect, and its general handling was good. As long as the throttle was kept at 1/4, it had no bad habits, and would climb much as its ancestor did.

This all changed the first time I gave it full throttle. The Enya .40 at full bore has one full HP, while the Baby Cyclone only had one-sixth HP wide open. It was a good thing I had gained a respectable bit of altitude at 1/4 throttle on that first flight, because when Ggave TORC full power, it very rapidly came up and over in a loop with no up-stick! It became evident that something had to be changed_ t flew it several times like this, using trim to help, but it was not enough.

I finally took the entire tail group off and reset the horizontal stabi-lizer with three degrees more of positive incidence. This is clearly shown on the drawing. Again, off we go to the flying field. This time it is much better, but it still has a decided climb at full bore.

Again it is back to my shop to give the model some down-thrust. The Enya had been mounted in the same manner as the Baby Cyclone, but the plywood was not aircraft plywood. I had used some regular 1/4 inch plywood I had on hand. I shimmed the rear of the Enya to give it about four-degrees downthrust. TORC then handled real well at any throttle setting. The poor quality of the plywood soon produced a loose engine that I had to do something about. I then cut out this area and installed the firewall of 1/4 inch aircraft plywood. To this I installed the Tatone mount, inverted as shown on the plane.

TORC has been flown since May of 1977 on many occasions, such as fun flys, demonstration flights at static displays, and just for fun, whenever the weather and time would allow. It enabled me to im-prove my flying to the point where I was able to fly my Fokker at the Endicott, New York contest in July. I did well the first day, but the corn roast and beer Saturday night did nothing to improve my flying Sunday.

Another reason that I decided to do my old design over as an R/C trainer was the fact that l have four grandsons who I would like to interest in R/C flying. They range in age from ten to sixteen years old. TORC, because of its gentle nature, has allowed them all to fly it without any previous R/C time.

CONSTRUCTION: While an attempt was made to show both the original 1936 design and the R/C version on the drawing, it was the trainer I was most con-cerned with, as the original free flight was not published during the period of its origin. Although the construction is quite normal, there are a few points that should be explained.

All of the material marked spruce on the drawings was cut from straight-grain pine on my ship, because I had the pine on hand. Spruce would be better. Balsa verticals, cross pieces and diagonals were used aft of the wing to keep the tail light. By selecting light balsa for the large tail surfaces and using the Enya .40, my ship came out balanced without adding any ballast..." 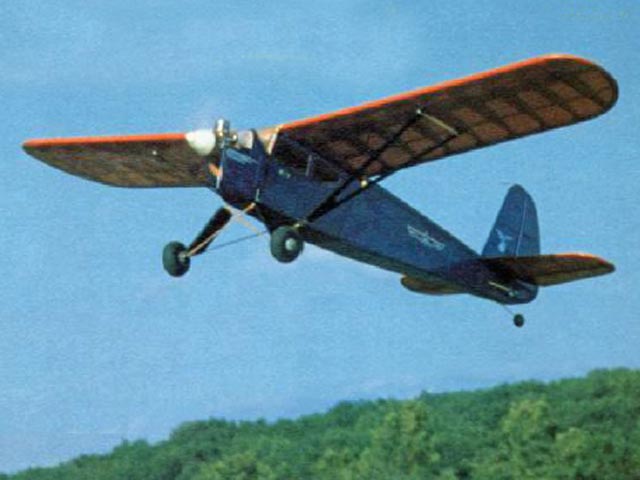 One may consider to replace the symmetrical stab by one with a profile like the wing, or CLARK-Y. If done so it will generate an amount of lift depending on the speed and will strongly reduce the tendency to look for the stars ;=) without the need too use high degree pitch settings of the stab and even the motor. Have a look at the Telemaster (oz2502), that ship is also based on a freeflight design and is pretty stable in hight at different speeds. I could fly this with a .29 up to .60 without any problem.
EC - 01/10/2020
Add a comment