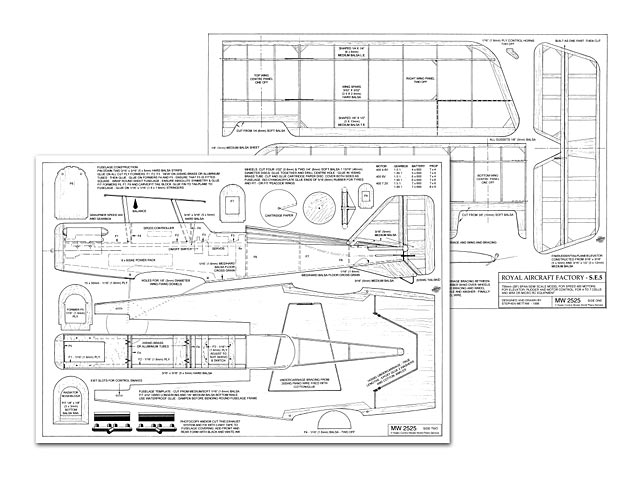 Quote: "Scale fanatics love to model an original that no - or very few builders - have modelled before. We want one that is sure to fly. Kits and plans provide proven models. There are not yet many scale models for 400 size motors. The editor wants to be able offer to you through the plans service a good range of designs for electric models. Those available did not include a biplane, so he designed the SE5 model to fill this gap.

Why the SE5 and not its better known successor the SE5A? Because the SE5 must have been built for modellers! They are very similar, but the earlier SE5 of which only 50 were built was a smoother and aerodynamically cleaner machine than the mark two or SE5A, of which more than 5,000 were built and saw praiseworthy service from 1917 until 1930, in many parts of the world.

The prototype A4561 was first flown by Frank Goodden on 22 November 1916 and early photographs show no windscreen and no Lewis gun, although the rest of the 50 that all saw action were fitted with a half enclosed 'greenhouse' canopy - years ahead of its time - that few pilots liked and was not continued on the 'A'. At the Royal Aircraft Factory (the 'RAF' before there was an RAF) the designer responsible for the SE5 was a young Henry Folland who many years later formed his own company to manufacture the Gnat.

Wing tip planform is better too on the SE5. The editor had always wondered why the planform on wings and tail of the SE5A was not identical, it would make more sense. Research revealed that the main differences as far as the modeller is concerned are that the tips were identical until the span of the wings was reduced on the 'A' by increasing the angle of sweep of the tip and that a bigger motor was fitted.

The nice modeller's feature on the early models was the neat front radiator and cleaner nose. Later models with bigger engines and bigger radiators had a squarer, blunter nose and longer exhaust pipes. They also had sturdier wood undercarriage legs. The original undercarriage of single tube V struts is easier to replicate with piano wire!

Several engines were fitted in the 50 SE5s built and the prop shaft
projected through the radiator centre, or high, or low when a gearbox was fitted.

The Model: The design rationale was to keep the weight as low as possible but the construction simple. The result of this was to use fewer components than is normal. This model's construction method takes so very easily the Graupner gearbox with its 'beam mounting' method. In retrospect, it would very probably fly without a gearbox, but I wished to be able to use a scale size prop.

Tail first: Build all the tail parts first, between stages you can cut the fuselage sheeting.

Fuselage: The fuselage assembly is quick. All of it forward of the cockpit and the fuselage sides are made from one sheet of 1.6mm balsa, wrapped round a previously built sub-assembly that contains the motor mount and sockets for the cabane struts. This big sheet of balsa is wiped on both sides with water so that it will bend easily. If you have to join more than one piece to make it, use a waterproof adhesive like an iso-cyanoacrylate, and not one that is water solvent - like the PVA adhesives. The fuselage rear 'turtle back' is stringered after the all-strip fin and tailplane have been glued to the fuselage.

The wings are very straighforward, construction is conventional. All the wing ribs are first cut identical with one template and the centre section ones shortened at the rear. Trailing and leading edges can be purchase ready-formed, or planed by yourself if you wish. Tips are cut from 3mm sheet. Short aluminium tubes and balsa gussets are added if you wish to fit interplane struts for scale effect, but the struts are not very noticeable and add drag. Decide for yourself. The editor's model uses them at home but not for flying.

Cabane struts are bent from 20 gauge wire. If you don't want the top wing wonky and spoiling the flying, take a few minutes to get the bends in the right places. True lengths are shown on the plan, jury rig them in the fuselage tubes and keep tweaking until they line up. The ply or wood cabane struts are cyano bonded to the piano wire. (The editor uses pine which is light and strong and available as 'deal' in any DIY store.) They are then covered with the same Solarfilm used to cover the upper wing surfaces. This aids the wire/wood adhesion and keeps the whole assembly rigid after the upper wing mounting wires are added. The cabane socket tubes need 'finding' by viewing from under the fuselage and searching with a pin, then opening-up with a piece of 20g wire. Insert all four wires and rest the inverted fuselage on these and with the 'wing ends' on the marked spots on the polythene sheet covered plan. Cyano bond the mounting wires to the strut wires, carefully remove both assemblies from the fuselage and cotton-bind and cyano these bonds, it is easier than it reads and each assembly is cyano bonded in the tubes after the fuselage has been covered.

The radiator grill can just be left open but authentic looking 'expanded aluminium' mesh is available for 99p from Halfords. It is used to bridge gaps when filling holes in car body repairs. Glue it in if you need to, the prickly edges on my original are still grabbing the Solarfilm covered balsa..." 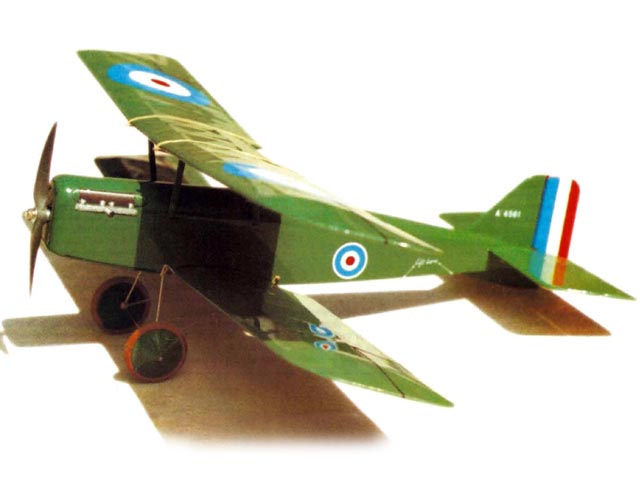