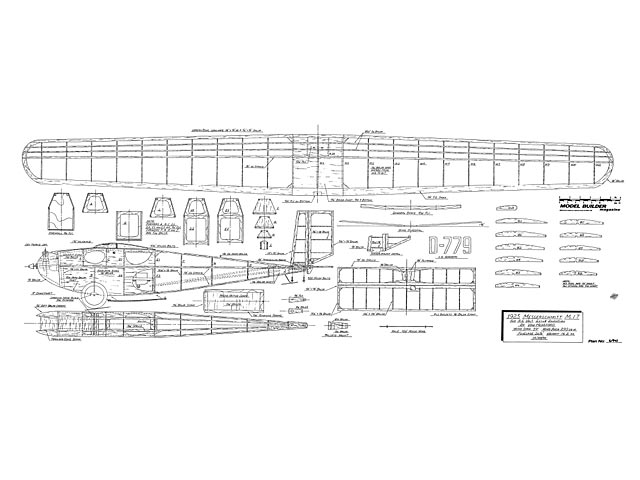 Quote: "Messerchmitt M.17 for 1/2A Texaco Scale, by Van Hereford.

Late last year our club held one of its Radio Control Duration 'Climb and Glide' meets (AMA provisional events #702 and #703), and several of our friends from Houston attended. One of them, Ben Beerbower, entered the RCD event flying a 1/2A Texaco Scale model of the English Electric Wren.

What a beautiful little plane! I was particularly impressed with the way it flew against our non-scale models, which were designed specifically for the RCD event. He took home a 2nd place trophy! I decided that I had to try my hand at designing one of these 1/2A Texaco Scale models. But what should it be? During the next few weeks, I thumbed through a large number of my old model magazines looking for a proper subject. There were so many good candidates to choose from. What about a Heath Parasol or an Aeronca C-3? The Corben Super Ace has always been a favorite of mine. But then, the Bristol Brownie, with its low wing, would make an unusual subject with good flying qualities.

I finally narrowed my choices to Les Long's Wimpy, a beautiful low-wing homebuilt, and the Henderson Longster, which was an attractive parasol homebuilt. Then the January 1993 issue of Model Builder arrived, and I saw Dave Linstrum's Peanut Scale model of the Messerschmitt M.17. This was the one! It had a relatively streamlined fuselage, simple square tail surfaces, a straight axle landing gear, a beautiful tapered wing with an aspect ratio of over 11, and best of all, no wires or struts.

The M.17 was Willy Messerschmitt's first aircraft to be produced commercially. It was a two-seat, all-wood monoplane with open cockpits. For power, it could be fitted with either a 24-hp ABC Scorpion or a 30-hp Bristol Cherub. It had a top speed of 93 mph and a landing speed of 40 mph.

The M.17 was a very successful design and won several sport flying events in 1924 and 1925. For those of you who want more information on Willy Messerschmitt, go to your local I ibrary and ask for Messerschmitt, Aircraft Designer, by Armand van lshoven, Doubleday & Co.

CONSTRUCTION: Care should be taken in choosing the wood for this model. Mine came out at 17 ounces. I made no particular effort to build light, and I'm confident that with a little care, you will be able to hold the weight at or below the required mini-mum of 16.2 ounces. The M.17 is simple to build for a scale model, and anyone who has built two or three models should have no problem building this one. Do take the time at the hobby shop to carefully pick out your wood. I usually go through the whole supply of each size I need, looking at each piece to make sure I get pieces that are straight and of the proper strength and weight. Carefully study the plans, reading all the notes, before beginning construction.

A step-by-step description of the construction sequence would be of little use here, but a few notes may be appropriate. When building the wing, note that the leading edge is laminated from a strip of 1/16 x 1/4 balsa and a piece of 1/4 square medium balsa; the 1/16 x 1/4 strip goes on the bottom. The 3/4-inch trailing edge stock is tapered to 1/2-inch at the tip. Be sure to notch the trailing edge, as shown, for the ribs. Most important: Do not substitute balsa spars for the spruce spars, and be sure to include the vertical grain 1/16 sheet web-bing as shown.

This wing has a high aspect ratio, and you want it to be able to withstand a rapid descent in case you find your M.17 a speck in the sky and rapidly getting smaller. Note the 3/32 ply reinforcements that fit under the upper balsa planking between the cen-ter rib W1 and the sub-ribs W1A; these are for the two forward 6-32 nylon wing bolts. Drill the holes slightly oversize so the bolts slip in easily. The countersunk nylon bolts look much better than rubber bands.

The vertical and horizontal stabilizer could not be simpler. Once again, be sure to cut notches for the 1/16 x 1/8 ribs. The only thing unusual here is the use of nylon bolts to mount the tail unit on the fuselage. I began using this method of attaching the tail surfaces on my Shadow RCD designs..." 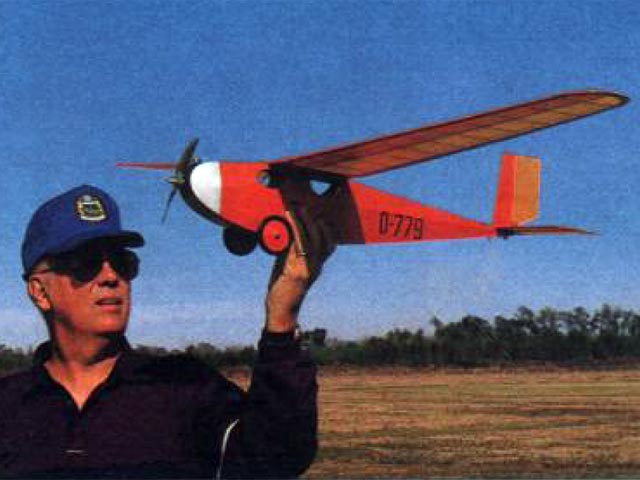