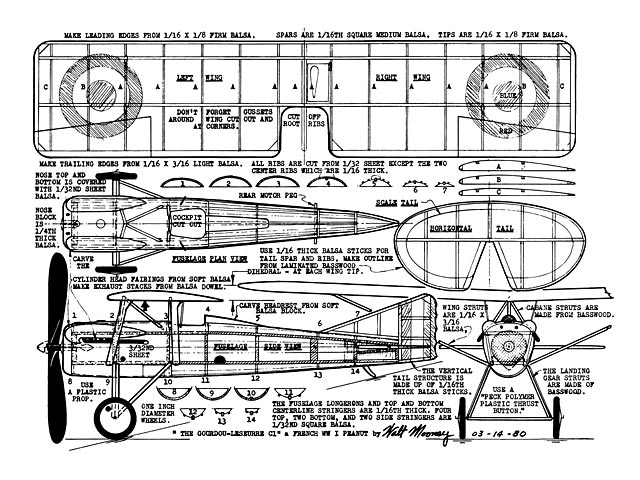 Quote: "Resembling a SPAD with only one wing, the Gourdou-Leseurre C1 is still another forgotten war machine that just happens to be an excellent modeling subject. Already a contest winner!

The inspiration for a new Peanut scale model can occur in many guises; for instance, a set of scale wheels, an interesting color scheme, a popular airplane in a new movie, or in the guise of total desperation for a good flying model to enter in a specialized contest scheduled for a week away. Such was the case for this model. I was desperate for a model to enter in the Flightmasters West WW-I contest. Looking in Warplanes of The First World War, Fighters, Volume Four, on page 121 I found a three-view of the C1. It looked quite a bit like the more modern Baby Ace or Heath Parasol so it was obvious that it would have excellent flight potential. In addition, it is a relatively simple design, so there was a good chance that it could be built in time for the contest.

The Flightmasters West club lets each member in turn, on a voluntary basis, run the club's monthly contests and decide what the competition will be. The contest director has the responsibility to provide the prizes. First place at the WW-I event was a very nice, engraved, crystal flagon.

The model is constructed in a very conventional fashion in almost all respects, so we won't belabor the technique except to mention several of the details which are not totally commonplace.

First, the fuselage structure is narrower at the bottom, which should be noted when the two fuselage sides are being assembled into the main fuselage box.

Second, the cabane struts take the form of a 'trestle' (sawhorse to us Americans), and the thin struts that angle out from the top cowling near the cockpit were aileron actuation push rods.

Third, although the wing has a constant chord (i.e., the wing is untapered in plan view), it is tapered in thickness near the tips which requires more than one wing rib shape, therefore the ribs 'B' and 'C' in addition to 'A'.

Fourth, the two center ribs are cut to the 'A' pattern from 1/16 sheet and everything aft of the second spar is removed.

The model in the photos was covered with condenser paper because it is light and because ii is about the right color for the C1, which shows the covering of the wings and tail to be translucent in the photographs that accompany the three-view in the book mentioned earlier. The insignia was cut from red and blue tissue. Roundels are doped in place on the top and bottom surface of the wings near the tips, and the rudder has vertical stripes. Interestingly, there is a darker colored panel on the fuselage sides at the horizontal tail installation. We assumed this to be an indication of a plywood panel and made it brown using a felt pen, but the color is only an assumption. And to quote the illustrious Murphy: "Assumption is the mother - and father - of all foul-ups."

The model balanced as indicated by the black arrow at about 0.9 inch aft of the leading edge of the wing, with a twelve inch loop of 3/32 rubber. When the condenser paper was water shrunk and then doped the outer half of each wing warped to give about 1/8 inch of washout at each tip. Since this is a good flight adjustment, it was left in. The horizontal tail had a slight warp which was not necessarily desirable, and we removed it by holding it over a source of heat while twisting the surface counter to the warp before we even tried to fly the model.

The torque of the propeller, in conjunction with the twisting slipstream, just happened to give the model a power pattern that would circle nicely in a gymnasium. On maximum winds the torque rolls the model up on the left wheel and the model takes off with its left wingtip about two inches from the floor. The high torque portion of the rubber motor run is thus spent on a relatively fast, fairly highly banked circle which then gradually flattens out. The circle diameter stays about the same size. This is a nice flight adjustment for a low ceiling site, but this model probably could be flown to the right to higher altitudes and longer durations if you have a suitable high ceiling site or if you are flying outdoors.

The only intentional deviation from exact scale dimensions is in the horizontal tail area, where the scale tail size is indicated, and of course in the larger-than-scale propeller. The real prototype airplane had the dihedral shown. Considering that the model in the photos accompanying this article has shown itself to be a smooth, stable flier, I believe it may be possible to fly it with a scale size tail.

Have a good time pretending you are a WW-I test pilot flying the Gourdou-Leseurre C1." 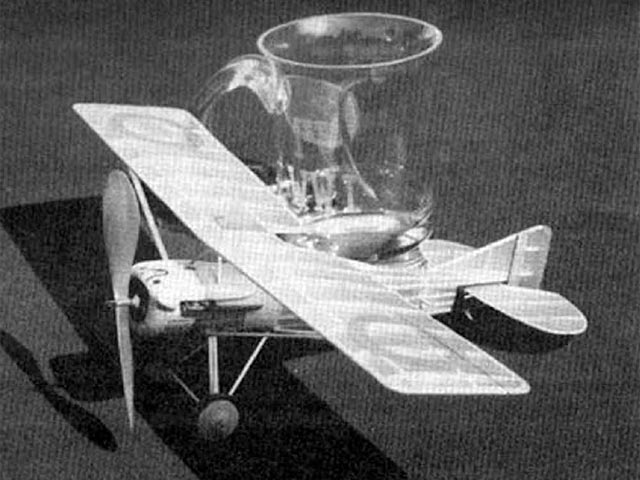 It is nice to see a plan for this. I have struggled with the spelling of the manufacturer, too. It should be: Gourdou-Leseurre.
The C-1 designation is a little strange. According to Wikipedia articles, the first prototype was Type A retrospectively named the GL.1. Subsequent ones were GL.2 (originally Type B) Some of the sub-types had C.1 in their designations, like the Finnish GL.22C.1.
Wikipedia has photos from the Finnish Air Force Museum example - and I have a couple too.
perttime - 25/09/2020
Doh. Thanks, have fixed the spelling now. Also added a 'scaletype' link to Wikipedia.
SteveWMD - 25/09/2020
The C.1 designation means Chasseur, crew of one, This is a designation system employment and crew size. For instance a Bréguet XIV B.2 would be a Bombardier with 2 chaps aboard, a A.2 would be Armée 2 seats, Armée here meaning Army Cooperation, XIV S being Sanitaire or ambulance. This system was still in use in WW2, a Bloch 152 C.1 would mean a Chasseur Monoplace, or single-seat fighter.
Miguel - 25/09/2020
Add a comment