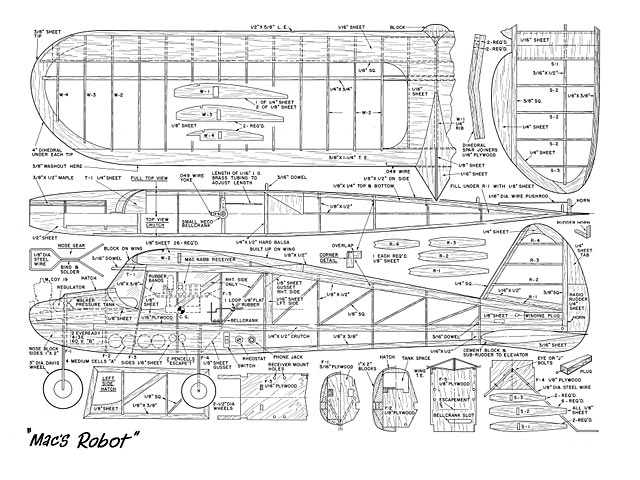 Quote: "This model is the third in a series. Here we trace the design and flying rather than detailing the construction, which is standard. Four of these Robots were built, three using the 50-54 mc. equipment and #4 using the MacNabb 'Citizen-Ship' radio.

The original design, the Radart (oz5761), was exactly the same size although slightly heavier and used a .29 for power. The engine however had too much power and had to be slowed down and inefficient propeller used. Many times the engine would lean out in the air, causing a high-angle climb which makes control under power, especially in a wind, extremely difficult. Another feature was built-in downthrust, and in the glide the fuselage was at a steep angle, making landings rough and helping break many props.

In the Robot, the same thrust, wing and tail incidence are used, but all the downthrust is in the engine itself, with the wing but slightly positive, so the plane glides with a slight nose-high attitude, making for good landings. Also the tricycle gear helps here and saves many props.

The weight was kept to four pounds and powered by a front rotary McCoy .19. The Walker pressure tank and regulator works beautifully, and runs up to twelve minutes have been made with the .19. The McCoy will hold any needle valve setting throughout the flight, regardless of how rich it is sent off. Starting reliability with a minimum of flips makes flying more enjoyable and gives more time to spend on the radio end.

The model has beautiful straight flying characteristics, yet will turn very readily with the rudder. No side thrust or trim tab setting was used, and turns both right and left are easily made - although the 'rights' tend to be more pronounced. If rudder trim is needed for straight flight, use the radio rudder and offset it in the turn deeded. The turns will be fairly equal in both directions as compared to using a trim tab..."

Article pages, text and pics, thanks to Ralf G of Kentucky on RCG. 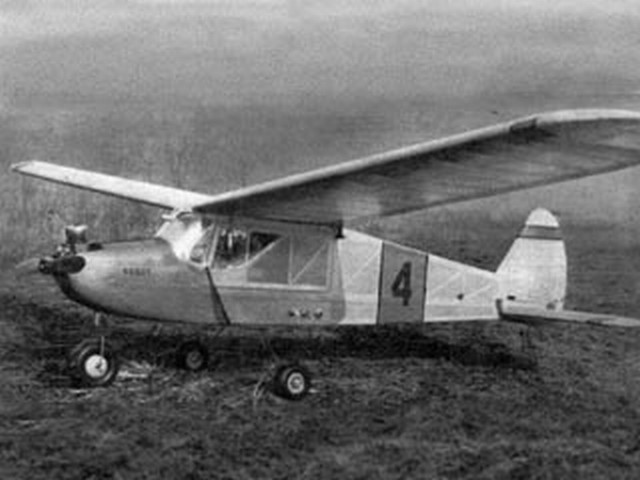 Hi, Steve. I was surprised to see 'Mac’s Robot' featured on your site. Way back in 1973, a couple of us kids (we were about twelve years old at the time) were given a Robot by an older modeler, who had built the model in 1953. The craftsmanship was flawless, and the yellow silk covering with red trim still looked pretty good, even with several patches. With a borrowed radio (rudder only) and a tired Fox .19 in the nose, we spent a summer flying this thing from the field next to our neighborhood. It barely had enough power to climb, so we only used the rudder to keep the airplane within the field’s boundaries, while it flew in wide circles. Even with the marginal climb performance, the Robot would be almost out of sight when the fuel tank ran dry. It didn’t glide very well, so landing was nothing more than keeping it pointed into the wind and not far from its intended destination. For a bunch of kids, this was heaven! Years later, a second Robot was built, but had three channels and an OS .28 in the nose. We had to change the horizontal stabilizer’s incidence angle to zero, and the amount of engine down thrust was also reduced. It flew very well, and had more than enough power, but I feel that the Robot is best flown as designed: with rudder-only control and with a .19 up front, possible with throttle. I wouldn’t even bother with elevator. It’s a great airplane and one that should be more popular with the vintage-RC folks. Thanks again for a wonderful site and please keep up the good work.
Moeregaard - 17/11/2014
Add a comment