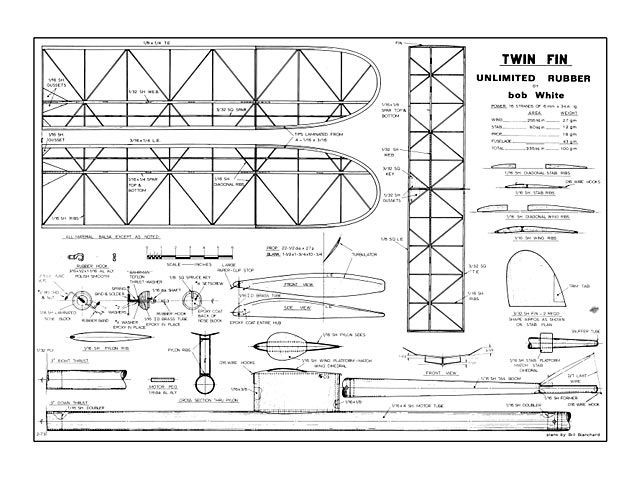 Quote: "Muscles of rubber thrust this Unlimited high into boiling thermals. A record holder! Capable, stable and consistent. The Twin-Fin, by Bob White.

Unlimited Rubber has one of the highest performance potentials of any AMA Free-Flight event and for me, one of the most enjoyable.

The model described here is a compromise. It uses Wakefield motors and is rugged enough to survive our California contest season. I use two Wakefield motors which can be wound to 650 turns or more if you use a winding tube (1 in plastic pipe). The model has a duration potential of about 10 minutes according to John Gard's formula.

On an overcast and still morning at Elsinore this Fall a series of ten flights were put up. All flights were over 8 minutes and several over ten. No flights were in obvious lift and none dethermalized. This was a rare day, even for Elsinore weather, but gave a good indication of the model's still air performance. I used a thermister which showed no temperature variations during the period when I was making the flights.

The model is a rather simple design and uses much sheet balsa of medium weight, 'A' grain for the curved surfaces and 'C' grain for the ribs and rudders. The wing spars and leading and trailing edges are hard and above all, straight. The entire model is glued together with Titebond glue. The metal parts and wires are epoxied.

The motor tube is formed over a 1-1/4 dia form in the following way. The straight-grain wood, that weighs about 15 to 20 grams, is soaked in hot water and wrapped around the form and held in place with an Ace bandage or old 6 mm Pirelli rubber. Let dry for 24 hours before removing from the form. Glue the seam with Titebond and tape together with masking tape.

The tail boom is made the same way except you first cut the shape shown on the plan and then wrap it on the form.

The wing and stab are made in the con-ventional way. If you haven't made a geodetic structure before. here are a few tips: cut the diagonal ribs a little oversize and then use sanding blocks shaped to the top and bottom of the wing. Sand the wing using lengthwise motion of the sanding block. After the ribs are roughly sanded to shape, cut the notches for the spars and glue them in place, then finish sanding. Dope the entire structure where the covering will contact it, using two coats on the bottom and cover in the customary manner. The body of the model is covered with Jap tissue and is given three coats of nitrate dope of average brushing consistency. The wing and stab are covered with light tissue (a visible color) and given just enough dope to seal the pores in the paper (two light coats). The rudders should be doped or painted one coat only, or they will warp.

You may wonder why the old-fashioned twin rudders. I feel that they control the model better in the climb, but most of all, in the glide. The plane can make consistent turns..." 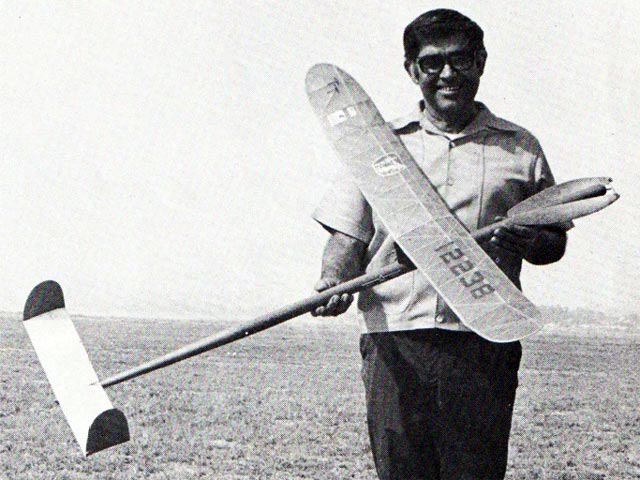