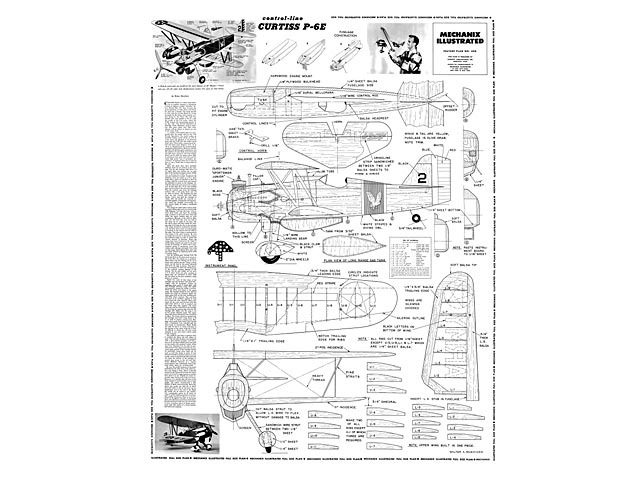 Quote: "Curtiss P6-E, by Walter Musciano. A 30-inch exact scale model of the most famous of all Hawks. Power with any .29 - .49 cubic displaement engine. For sport or stunt flying.

CURTISS Hawk is a name long familiar in aviation because it represents a series of fighters (called 'Pursuits' before World War II) that formed the aerial backbone of both Army and Navy for well over a decade. The series started in 1935 with the Curtiss Hawk P-1 being accepted by the Army and a similar version flying for the Navy. The next four models were very similar to the P-1 and the model of the P-6 series, called the P-6E, became the outstanding pursuit of its day. The 17th Pursuit Squadron at Selfridge Field, Michigan, helped publicize this prize plane and their color scheme will go down in history as one of the most vivid.

Our model, color scheme and all, is patterned after the planes used by the 17th Pursuit Squadron. The model makes an excellent beauty event entree as well as a fine sport job. Because of its generous wing area the P-6E will also make a good stunt job if fitted with a symmetrical airfoil and stunt tank.

Engines from .29 to .49 cu in displacement are recommended, using glow plug ignition. However, electric ignition will operate quite satisfactory but the addition of scale detail and a fine paint job add many ounces to the total weight, which can be offset by using a glow plug. A petroleum base glow fuel was used because high power was of secondary importance. If methanol base fuel is used be sure to use a finish that is impervious to the fuel.

After the plans have been carefully studied, work can be started on the fuselage. Cut the two fuselage sides from 1/4 in sheet balsa and cement one on each side of the hardwood engine mount. While this is drying, the bulkheads can be cut out and cemented in place. Construct the stabilizer from two sheets of 1/8 in sheet balsa with a piece of crinoline to serve as a hinge. Add the control horn and cement the stabilizer in place on the fuselage. Install the bellcrank and connect the control rod. At this time the 1/8 in wire landing gear can be bolted to the plywood support. Test the controls and cover the fuselage bottom with a soft balsa block and 1/4 in sheet as shown. The fuselage top and nose are also covered with soft balsa blocks. Carve and sand the fuselage to shape after the blocks are securely cemented together. During the carving process, check the fuselage cross-section for the correct shape by using a cardboard template.

The wings are made with a heavy leading and trailing edge and are covered with GM Silkspan. Cut the ribs from 1/16 in hard sheet balsa and taper the leading edge as shown in the front view. Now pin down the upper leading edge on your workbench. Because of the built-in dihedral you will find that only one half of the wing can be made at one time. Pin the ribs in place and then install the trailing edge by fitting the ribs in the notches. The wings should be constructed directly over the plan with a layer of waxed paper in between so the cement will not stick to the plan. The lower wing is constructed in two halves in the same manner. Be sure to install the root rib on the lower wing at the indicated angle in order to obtain the correct amount of dihedral. When the wings have been trimmed to the Clark Y airfoil shape (unless you plan to use your model for stunting, in which case a symmetrical airfoil is necessary) cover the surface with silkspan and apply four coats of clear dope. Sand lightly after each coat has dried. Finish by applying three coats of yellow dope.

Cut the landing gear fairings from the stock specified on the plans and cement to the strut after the wheels are in position. When this is dry the fairing can be cut to shape and sanded smooth. Using a sharp razor, cut the strut at the point indicated and bevel the edge as shown. This operation is necessary to allow the landing gear to flex without causing damage to the fairing. The fin and rudder are cut from 1/4 in sheet stock and after sanding to shape they are cemented in place. Add the tail wheel as the plan indicates, using plenty of cement.

Apply two coats of clear dope to the fuselage and tail surfaces and sand thoroughly with 00 sandpaper. Follow by applying three coats of wood filler with wet sandings between coats. The entire tail assembly, except the rudder, is yellow. Paint the struts and attach to the upper wing. The fuselage should be now painted before the wings are attached. Apply the white paint first on the nose, landing gear and body where required. This coat does not have to be carefully applied as long as it covers the area required. When dry, mask off the color and proceed with the olive drab which in turn is masked and the black dope then applied. The lower wing can now be cemented to the fuselage by inserting the leading edge stub into the fuselage side. Make sure the wing is set at the proper dihedral angle. The upper wing with struts attached is now cemented in place. The struts should be pushed into the fuselage and lower wing about 3/16 in. in order to obtain a strong joint. Rigging wires made from heavy grey thread and a windshield from celluloid add the final touch to construction. Black decals are used for the US Army lettering on the bottom of the lower wing but it may be difficult to obtain the old style army insignia. If you can't find a decal, paint on the insignia.

The auxiliary gas tank is optional and, if omitted, the plane will still adhere to scale. The full scale airplane was equipped with a three-bladed propeller and therefore an X-cell three-bladed prop was used on the model with excellent results. Pitch was 10 in; diameter 9 in. In order to provide access to the engine and tank, the forward upper portion of the fuselage should be removable. Large dress snaps can be used to hold this hatch in place. If you intend to install an ignition system in your model, center it beneath the bellcrank and cut away the bottom of the fuselage to permit easy access to the coil and batteries. Medium batteries in a regular metal battery box (obtainable from your local hobby shop) are recommended.

Be sure the model balances at the point indicated on the side view of the plans before any flying is done. Select a smooth surface for the flying site because the wheel pants are bound to snag in grass no matter how short it is cut. Flights are most enjoyable when flying from sixty-foot lines. However, if a smooth take-off area is not large enough to accommodate lines of this length, the author recommends a Jim Walker U-Reely control handle. With this device the model can take-off on short lines and when in the air the lines can be lengthened, and at the end of the flight the model can be reeled in and landed. Use considerable power at all times in order to avoid mushing and loss of control. The rudder should be offset to cause the model to fly against the pull of the flying wires, this will insure taut lines at all times.

If built and flown with care you are bound to have countless hours of flying enjoyment with this replica of a truly famous and historical airplane. " 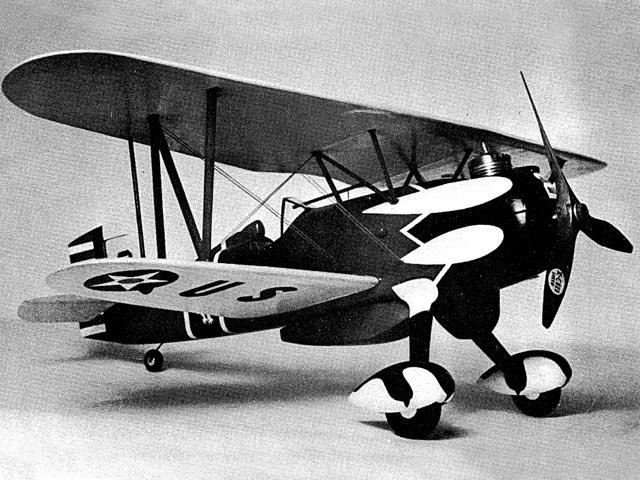