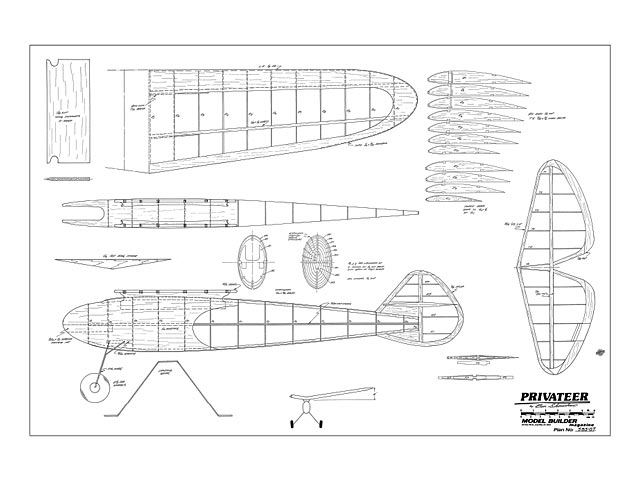 The Privateer (oz1158) was first published in September 1939 Air Trails. This here is a later redrawn plan by Al Novotnick in MB 1985.

In spite of what you may be thinking, the 'BS Privateer' stands for Ben Shereshaw Privateer. And the reason for that title was the realization that we already have an OT Privateer!

After sending Al Novotnik the material from the September 1939 issue of Air Trails, to make the full-size plans, something kept bugging me about the model's name. It sounded familiar- like we had done it before. With an OT in nearly ev-ery issue, the thought of mistakingly repeating a presentation kept coming to mind. As it turned out, I was partially right, and luckily, partly wrong. The 'Privateer' was published in March 1979, but it happened to be Thracy Petrides' big seven-foot cabin job!

Typical of many Shereshaw streamliners, the fuselage of the BSP was originally built 'in the air,' by somehow attaching first the side longerons and then the top and bottom longerons to the bulkheads - all the while keeping everything in perfect
alignment. We'd strongly advise going to a crutch-type construction, ie build a single frame over the top view, of slightly larger wood sizes, then slip in the bulk-heads and finally, add the top and bottom longerons. The forward fuselage is planked with soft 3/32 strips, which, when sanded smooth, will blend in with the rear stringers which protrude 1/16 from the bulkheads. Though shown solid, photos indicate the bulkheads were cored out to about 3/8 to 1/2-inch wide.

Stab and rudder layouts invite R/C conversion. Double spars and straight taper ribs make the job easy. You might want to widen the 'V' in the elevators to allow more rudder movement, depending on your flying habits.

The 44-inch span model, with just over 300 squares, may be flown with Class A or B engines, and with so much scaling up of OT designs going on, we wouldn't be surprised to see some double-size BS Privateers this summer." 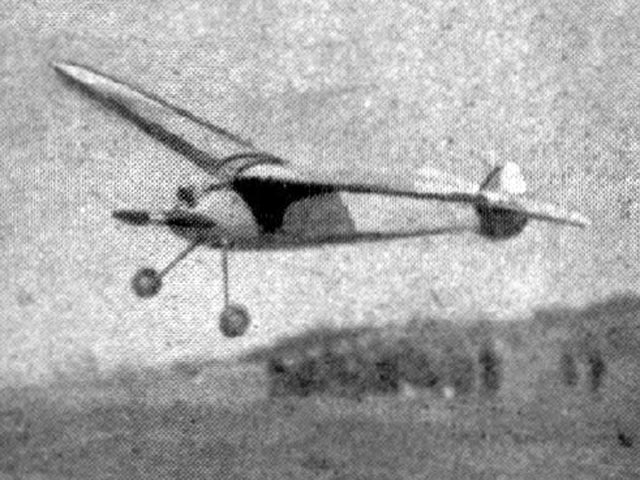 I saw the name and was immediately reminded of something else. A Flying Boat by Don McGovern perhaps? Regards to you and Mary.
K K Iyer - 20/09/2020
Add a comment