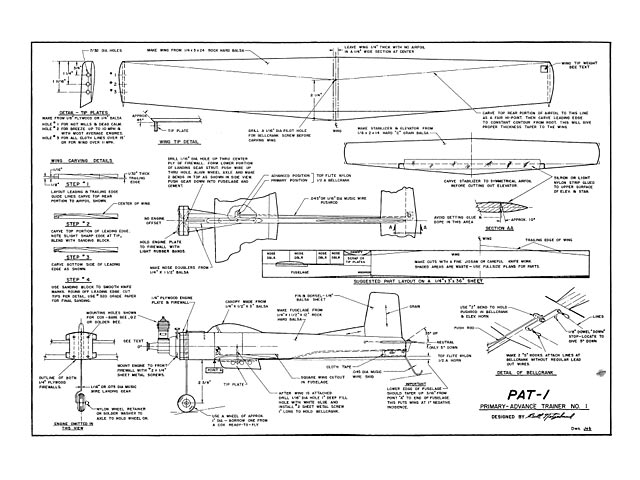 Quote: "The perfect training airplane would be: indestructible; perfectly stable at its trim airspeed; would know where the pilot wants to go, before he does and have a foolproof powerplant. Since perfection is not possible, we created the PAT-1. It is not indestructible, but its strength-to-weight-to-speed ratio exceeds those of any larger airplane. Further, it features, pop-off engine mounting (Carl Goldberg's Wizard, right to the letter), a landing gear strut that bends without breaking on hard impact, and a wing mounting that shucks the whole wing in a vertical power-on landing. It can be built from one piece of 14 x 3 x 36, a piece of 1/2 x 2 x 18, some scrap 1/4 in plywood, wire and hardware. CHEAP, simple, nice looking, flown either direction, will loop. Interested?

Normal complaints about 1/2A machines include lack of 'feel' or line tension, instability, hard to take-off and land, etc. These problems were designed OUT of our trainer. Since the process is interesting come along, please.

To guarantee a high degree of pitching stability, the ability of an airplane to right itself after being disturbed, we used a large tail volume coefficient which incorporates a small wing chord, a long tail moment arm and a large ratio of stabilizer to wing area for maneuverability, and reasonable take-off and landing speed, we designed for a 0.10 ounce per square inch wing loading. The 7-ounce max weight led to 70 sq inches of wing. Original models had a 9 to 1 aspect ratio, but John Barr discovered that the whole ship could fit into a stock piece of wood, if the wing span were reduced to 24 in. Final wing is 69 sq in with an 8.4:1 aspect ratio. The high aspect ratio, with tip fences reduces downwash at the stabilizer, further increasing static stability.

We did not want stability thru nose-heavy trim, like normal trainers which are merely sluggish, not stable, so we used a 22 sq inch stabilizer with a tail moment arm equal to 3 chord lengths. This arrangement, with the CG location shown gives us a static margin of 87% and a pitching moment curve twice as steep as most trainers. This simply means that PAT-1 will develop twice the recovery forces when hit by a gust, but with the highly effective tail it will respond quickly and positively to command.

To reduce the control sensitivity for the 'first flight' type pilot, elevator travel is reduced at the bell-crank. This merely reduces the erratic flight path due to normal first flight over-control. To further reduce the NEED for controls, the wing and tail incidence angles are built to trim the ship with neutral elevator, in level flight at 60 mph. Therefore, no down is needed since normal flight speeds are less than 60.

Studies prove that the beginning pilot is most dangerous at take off, generally freezing on UP and looping into the ground. To reduce this hurdle, serious communication is the only final answer - 'Come back to neutral after horsing off the deck'. PAT-1 will come off of hard top with neutral elevator, after rolling cleanly, tail up and will climb gently to level. Reasons are the high speed trim decalage, the accurately located single wheel, the vertical CG (Center of Gravity) location relative to line guide and the raised thrust line which creates a down pitch force during acceleration. For operation out of reasonable grass, use a larger wheel (K&B or Veco 1-3/s dia). IF it comes off under frozen UP control, continued UP will loop it safely, since elevator travel is limited to work the wing up to a 0.6 CI (Lift Coefficient) which is below stall and sufficient to loop. With the controls in the advance position Cl max is increased to 0.8 which will give you a nice loop under 65 degrees, and allow more horsing around.

We have successfully test flown 4 ships on the following lines: 11 ft Dacron with TD .010; 20 ft Dacron with TD .020; 25 ft Dacron with Cox Babe Bee (Single Port) and Muffler; 35 ft Dacron with Cox, QZ and Golden Bee, 42 ft x .008 dia wire, with all Cox .049 mills and 50 ft x .006 wire with the QZ, muffler off. By routing the lines thru the hole recommended on the plans for each set of lines, line tension was solid and control feed-back was positive. Note: both lines go thru the same hole. Except for the 50 ft line you can stand flat-footed at launch and she'll run out straight and true. With the long lines a step or two in the direction of flight will keep things under control. Speeds ranged from 22 mph to 63 mph.

The P.A.T. 1 can be set up several ways for different missions. As shown on the plans, with no engine or rudder offset and no wing tip weight she is ready for either CCW (Counter Clockwise) or CW (Clockwise) flight..."

Quote: "Hello, Steve and Mary. Here's my latest CAD redraw, the PAT-1 1/2A C/L trainer by Bill Netzeband (oz12480). Plan published in your webpage one week ago. I send you the plan in PDF vector format, and both CAD vector formats: DWG and DXF. By the way, some years ago, I bought that plan from Model Airplane News, and my copy has less quality than yours. Greetings, from your friend," 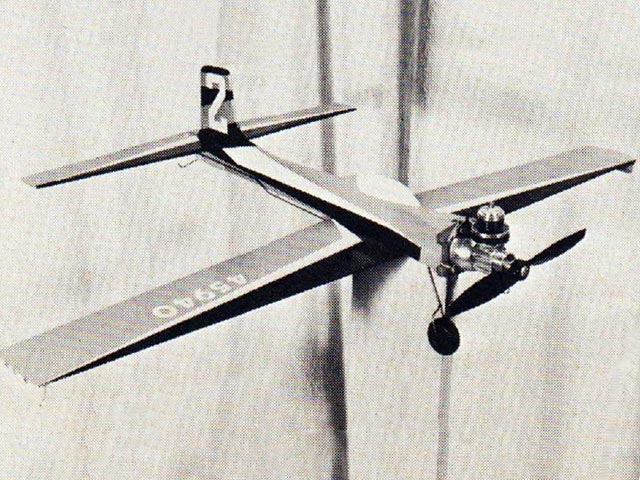