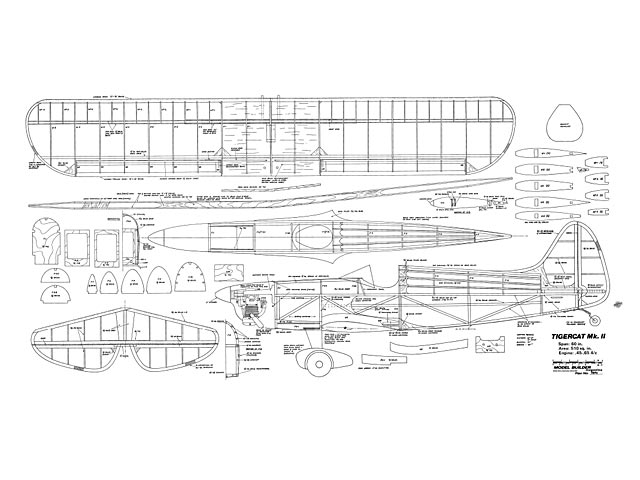 Quote: "'Could-be scale' at its very best! Our author has blended the most pleasing characteristics of some of his favorite airplanes into a very appealing design. For .60 to .65 size four-strokes and experienced builder/pilots. Tigercat Mk II, by Bob Benjamin.

The Tigercat Mark 2 is another in my series of 'could-be-scale' sport acrobatic designs. I interpret this term to mean that the airplane might well be a scale model of some full-size aircraft that never quite came to be, or that it might fancifully be scaled up to full-size. The Tigercat came about as an attempt to blend some of the most appealing characteristics of the limited-displacement closed course racers of the 1930s into an appealing model. There is a strong flavor of Keith-Rider, Brown and Benny Howard in this design!

Those of you who recall my Bobcat Mark 2 (Model Builder, Feb '88) may notice a similarity; in fact, this latest iteration of the Tigercat is a Bobcat in terms of moments, airfoil, and incidents. The lines have been changed to increase the appeal. The overall size has of course been reduced. The Bob-cat flies well on a Saito .80; the Tigercat you see here uses a Saito .65. It also happens to fit into most cars more readily than its larger ancestor.

The Tigercat, like the bigger Bobcat, is not tricky to fly, but demands your full attention all the time. It is by no stretch of the imagination a trainer. There is a small margin of positive stability in both pitch and roll built into the design, but for prac-tical purposes the airplane will go where it is pointed. Though by no means a real racing airplane the Tigercat is quite fast and will cover a lot of real estate in a hurry - the point being that it is not a small field airplane. On the other hand, I have tested the prototype extensively in slow flight at safe altitude and determined that it will respond safely at low speed and retains aileron control right up to the point at which the wing gives up completely and stalls out. In short, it is an exciting airplane to fly for a pilot who has some solid low-wing experience under his belt.

While laying out the structural design of this airplane I gave a great deal of thought to the demands the Tigercat will make on the modelers who build it. I've explained that it's not for novice fliers, now I'll go one better and state that it's not for novice builders, either. The whole purpose in laying out the design the way l did was to provide an airplane that would be esthetically exciting both in appearance and in flight performance. To compromise visual appeal for the sake of simplified co-struction seemed out of keeping with what I wanted to do in the first place. Besides, there are already plenty of easy-to-build sport planes around.

My final decision was to develop this airplane as a showpiece for those of you who have learned to build well. I make no excuses for having made demands on the builder. If you like the looks of the Tigercat, but don't feel your skills are up to it, don't give up. All of us 'old timers' started out just like you. Keep on practicing your flying with the models you are used to and fine-tune your building skills with a couple of good rubber powered scale kits. The excellent kits by Flyline come to mind as good examples. Believe me, the results will be worth the work. I've been flying this airplane for a year at the time of this writing and I still get turned on just looking at it hanging on the wall of my shop. It has never failed to elicit all sorts of positive comments from fliers who see it for the first time.

As has been the case with other designs I have presented in Model Builder, I make use of a lot of spruce and basswood in this model. While these woods exact a small penalty in weight, they return the favor amply in terms of greatly increased strength, resistance to bowing under the tension of a properly applied covering, and in dent resistance. While there is no point in trying to make a crash-proof airplane, building one to withstand all the little knocks and dings that come along makes a lot of sense. Try it, you'll like it! Let's build this airplane!

TAIL SURFACES Both the horizontal and vertical tails are based on laminated basswood outlines, and it is with these components that you'll need to start work. I have been using this approach to building attractive, strong, scale-like flying surfaces for some years and have long since stopped making involved forming fixtures. Cut an ample supply of small blocks of firm wood that you can readily pin to your building board. Having covered the work surface with plastic, firmly pin a block on the inside edge of the horizontal tail laminate outline wherever you feel you will need a support. (Every two or three inches should do it; experiment until you find what works well for you.) Note that the laminated edge starts at the outer end of the straight lead-ing edge and continues all the way around to the inside corner of the elevator. This entire length is made in one piece and later cut to separate the fixed stabilizer from the elevator. Lightly wet the bass strips and wipe them dry.

Leaving enough material to run several inches beyond the ends of the finished piece, securely pin one end of the inner strip to the board and pull it tightly into position against the blocks. Move any blocks that don't hold the strip in the position you want. Pin the strip as necessary to keep it located. Now attach the end inch or so of the next strip to the 'starting' end of the laminate. I find it easiest to stagger the ends of the successive strips by a half inch or so in order to pin each securely without having to remove any pins. Using 'Special T' and Kick-It accelerator, secure the starting end and then glue the entire strip a few inches at a time, keeping it under light tension and pinning as necessary as you work around the out-line. Repeat the operation for each strip..." 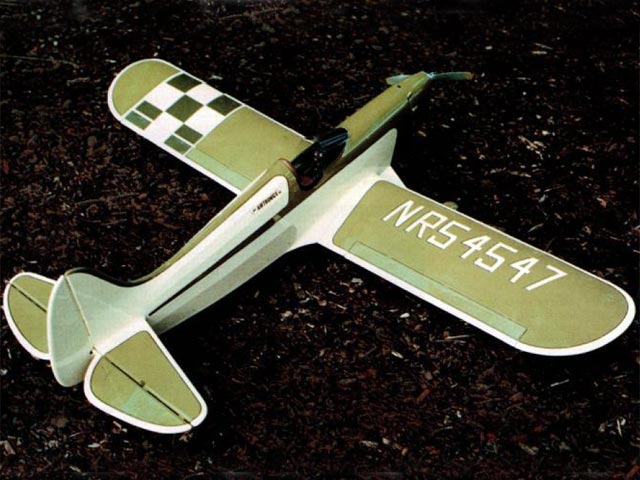