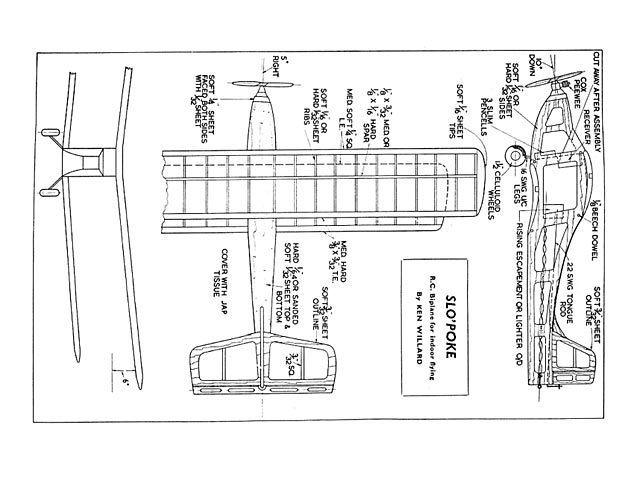 Note the Slo-Poke and the Warpy (oz12475) both appeared together in the same article, in MAN May 1959. This article was republished in the 1959 Aeromodeller Annual as "Indoor and Small Space Radio Control Flying, by Ken Willard".

Quote: "With growing scarcity of flying fields, particularly in built-up areas, the idea of an indoor radio-controlled model has a lot of appeal. There are plenty of drill halls, gymnasiums, village halls and the like which would be excellent places to fly such models, that is, if you could make an R/C job which could fly safely within the space available.

Until recently, the idea was pretty far-fetched; then along came the transistor with its lightweight and low drain features, and, suddenly, the lightweight radio was an actuality. Sure there are still some problems to be worked out, but the sets now becoming available are reliable enough and light enough to do some experimenting.

Actually, the indoor R/C job is nothing but a refinement of the smallfield R/C model. I have been designing them for quite some time, starting with the little Breezy (oz582) biplane which appeared in Model Airplane News a few years back (not to be confused with the commercially produced Breezy monoplane which came out a little later). The biplane has the basic characteristics of high maneuverability combined with the chance to get a low wing loading and a fairly small model. Therefore, it was logical that my first attempt at an outdoor job would be a biplane.

Since the small-field Breezy was designed, several new lightweight radios have appeared. So far, the lightest of the lot is CG's all-transistorised receiver which even uses a power transistor in lieu of a relay. Also, it operates on three volts, and the small wafer cells which CG puts out are ample power. The limiting factor on this receiver is that it is designed with the Bonner SN escapement in the circuit, and if you use another escapement, your chances of success are marginal, because the magnetic efficiency and operating characteristics of the Bonner are different. However, this limitation is not serious, since the Bonner SN is very reliable; the trouble that I have with it is not the escapement - it's my own inability to remember what's coming up. I finally had to give up and go to the Bonner compound - which uses the same coil, but is bigger and heavier. I saved some weight by cutting it down to a minimum size, and it has proven very successful in the indoor biplane. Another thing you have to do is to take receiver out of the case and use only the chassis. Lightweight is paramount, and you can't afford to carry a case around.

As for the engine, I tried several ideas. First was a rubber band motor. I gave it up because the motor run is too short. Next I tried an old Campus 'B' CO2 motor, but it didn't have enough poop. I finally settled on Cox's Pee-Wee .020. It is far too powerful, but you can convert the power into just the right amount of thrust by making a small metal prop to fit behind the regular prop, but bend it into reverse thrust - -just enough to cut the total forward thrust into just what you want. But watch out for your fingers!

Now we've settled on a radio and an engine. What about the airplane? It should not only be light and maneuverable, it should also fly very slowly, both for ease of control in a limited space, and to keep damage down when you goof on the controls, which you will.

Two factors in wing design help to keep flying speed at a minimum; one is high aspect ratio, the other is high camber. The former has the drawback of reducing maneuverability so a compromise is necessary. But high undercamber has no drawback except perhaps a bad stall characteristic - and we can live with that. Generous dihedral is required so you can rock the model around in tight turns.

From all the foregoing considerations, a variation of the Breezy biplane was designed. To keep weight down, a long narrow fuselage seemed logical, with the top wing up on cabane struts. The aspect ratio of the wings was increased, and the result was a long, thin biplane. This model flew fine - but it was too fast !

The next design went back to the cabin type fuselage, because of the higher frontal area and bigger drag. I used the same wings and tail, and found a definite improvement. This design, with a 33 in wing span, weighed in at six ounces, and is still flying. However, it requires an area about 100 feet by 125 feet for safe maneuvering, and this is still a little large.

While flying the little bipe, which Bob Bowen, editor of the Lark newsletter, christened the Slo'poke, I had another idea for a design which held promise..."

Article, thanks to Mary from https://rclibrary.co.uk/title_details.asp?ID=1260 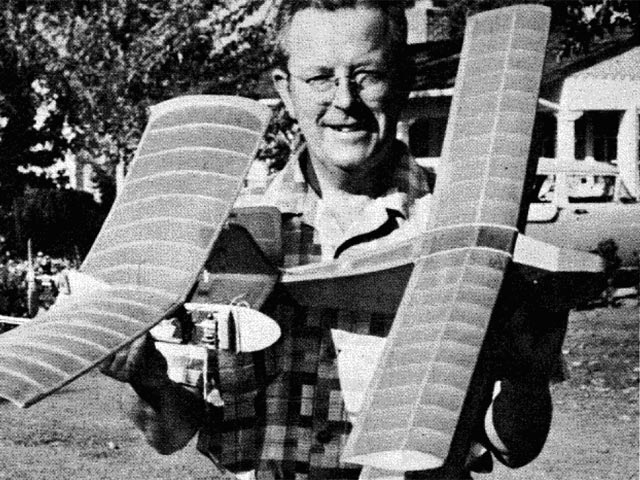