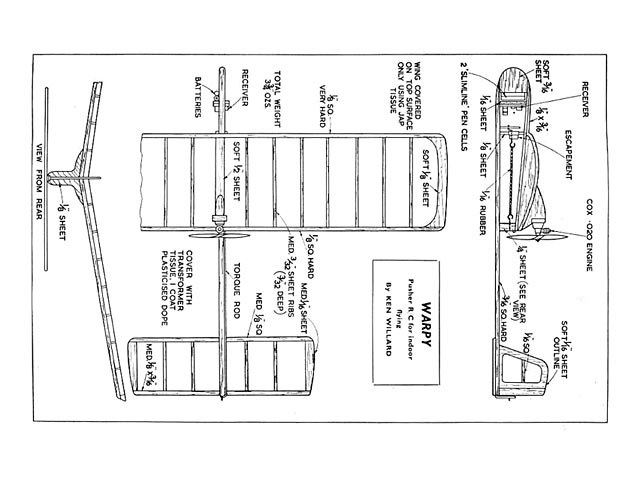 Note the Warpy and the Slo-Poke (oz12476) both appeared together in the same article, in MAN May 1959. This article was republished in the 1959 Aeromodeller Annual as "Indoor and Small Space Radio Control Flying, by Ken Willard".

Quote: "While flying the little bipe, which Bob Bowen, editor of the Lark newsletter, christened the Slo'poke, I had another idea for a design which held promise. In the first place Slo'poke had the prop out in front, which is a bit of a hazard to people who might be watching. It also had a landing gear, which added weight. How about a new concept - from an old one, of course - with the prop in back and a skid to land on? I had also discovered that the Bipe is much stronger than is necessary when you get down to these lightweights - it even flew right into the trunk of my car one day, banging the structure in several places without damage.

Another point; with a pusher, the engine would be in back and forcing the exhaust back as well - so let's go to a profile job and let everything hang out in the breeze. Finally, let's go really indoor in the design concept, with a single surface wing.

When the model was finished, I covered the wing with Jap tissue, and then made my mistake. I didn't plasticise the dope enough and when the covering dried after the first coat, the airplane was named Warpy. I should have used the same size wood for the leading and trailing edges, but I didn't and the trailing edge really warped up. This gave me a lot of washout - more than I wanted, but I figured it would be all right to experiment with, so I finished up the model, fuel proofed it, and took it out early one morning to test in calm air.

This model proved to be a truly named indoor job. It weighs 3-3/4 ounces, has a 33 inch span, a 7 inch chord, and flies slowly enough so that you can run alongside of it. Don't try it, though, unless you've checked your transmitter-receiver combination to be sure the receiver isn't swamped when the transmitter is too close. The model is adjusted to fly in a 30 ft circle to the left. By pressing the button on the transmitter once, right rudder pulls the airplane slowly into straight flight and then into a gradual right turn.

Warpy is what I would call a sort of 'laboratory' model. It does the job, but it isn't much to look at. But it does point the way, and for you experimentally minded modellers, it isn't too hard to make a few refinements to the design and come up with a really attractive indoor R/C job which you can fly in the local high school gymnasium (get the principal's permission first!). For example, make the boom hollow, and run the torque rod through it - maybe close in the cabin area with a light shell of balsa.

I have given some thought to another design. It's a variation of Warpy with tractor engine (easier to adjust for flight). Again, it's a rather ungainly and fragile design but I think it has possibilities. The open framework, single surface wing and lightweight radio are virtually mandatory for very small areas, since slow flight is a must, and that means ultra light wing loading. A couple of transverse balsa or thin plastic baffles (or 'windscreen') in front of the radio and escapement will deflect the engine exhaust as well as create drag which is desirable.

You may have trouble equaling the weights which I have indicated. However, a seven ounce version of Warpy, which a friend of mine made, does a pretty fair job, although faster by about one-third. So there is some leeway.

You probably already have an idea or two of your own, so go to it, and let us hear how you make out."

Article, thanks to Mary from https://rclibrary.co.uk/title_details.asp?ID=1260 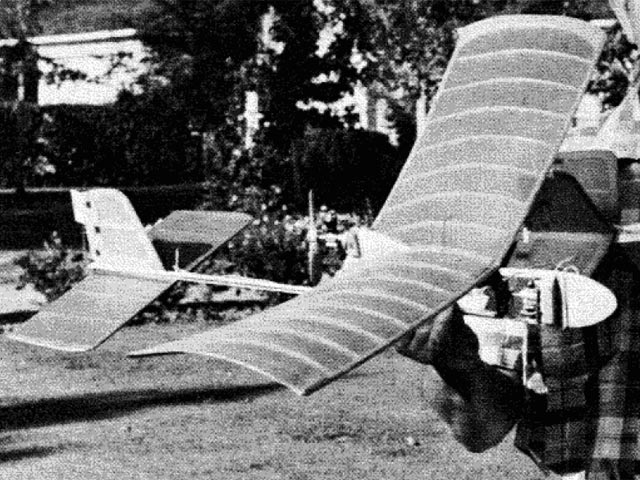