Quote: "Old Timer of the Month. The Alert. Design by Michael LaTorre. Text by Bill Northrop. Plan by Phil Bernhardt.

When this month's Old Timer was originally published, there weren't too many modelers around to appreciate it - most of them had joined the US military forces, and those who hadn't for one reason or another were finding it difficult to obtain the main ingredient - balsawood. The 'Alert,' an appropriate name for the period, was published in the December 1942 issue of Air Trails magazine, and was designed by Michael LaTorre, a well-known East Coast (New York) modeler. Like his C-Raider (oz5964) which was a simplified version of Schoenbrun's Gladiator (oz4), the Alert is a greatly simplified Goldberg Zipper (oz387) or Mercury.

Our plans were drawn by Phil Bernhardt, and the model shown was built by Phil's father, the late Otto Bernhardt, about 18 wars ago. It has always been an excellent flier in free flight events. After reading the construction portion of the article, we've decided to let Phil's plans talk for themselves; the article is somewhat confusing. Flight pattern of the original model was left power, left glide, with a bit of wash-in applied to the left wing panels to prevent any power spirals." 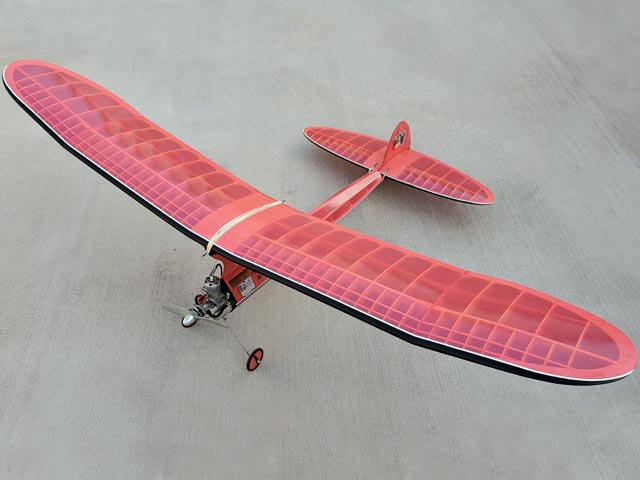 Nice to see the Alert featured on Outerzone. It's extra special for me because the ship pictured in the Model Builder article, with the 77 on the side of the pylon, was built by my Dad, Otto Bernhardt. The model still exists; I took the attached pics just yesterday morning [main pic, 004-008]. The model is still in great shape despite being in storage for the last 35 or more years. It's covered in fuchsia colored silk (black silk on the bottom of the wing and stab and lower fuselage) and nitrate dope with a finish coat of K&B Superpoxy clear. The engine is one of my Dad's early 77 Products spark ignition conversions -- a cross-scavenged Supertigre .15 running on crankcase pressure. A real screamer! The engine is gummed up some after sitting so long but wouldn't take much to get it cleaned up and ready to go.
Thank you Mary and Steve for your work on Outerzone! It's a godsend for us modelers who enjoy building as much as flying!
Phil Bernhardt - 17/09/2020
Add a comment