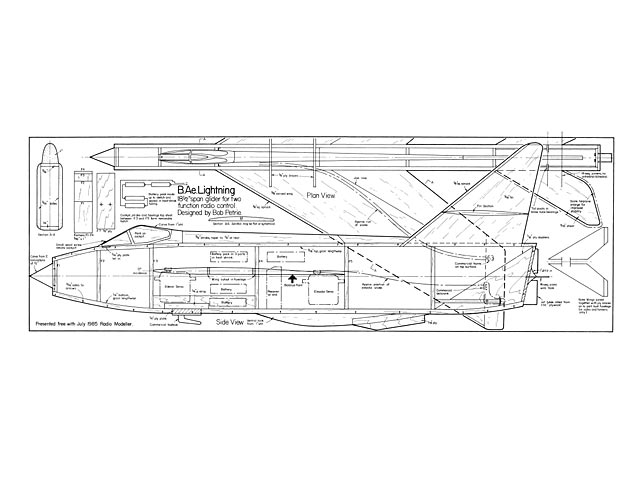 Note the Lightning and Hawk (oz12470) both appeared in the same article "Catapult Jets" in RM July 1985.

Quote: "LAST MONTH WE INTRODUCED catapult jet models to you with the HS Gnat (oz12463) design; in this issue we have two further design submissions, the BAE Lightning and the BAE Hawk. Although we hope you will be sufficiently interested to build from the free plans provided, please remember that the whole concept of Cat-jets is intended to get you experimenting with and designing your own models. Nor need your activities be limited to catapult launching - try the models on the slope, release them from a 'mother' aircraft or even try fitting a small engine to them. Try larger versions of jets, using the same forms of construction. Our hobby is, or should be, all about enjoyment and having fun and the more you put into the hobby, the more you will get out of it. You won't win any prizes with these types of models but they can give a great deal of satisfaction.

BAE Lightning: Designed by Bob Petrie, the Lightning has become a popular model subject recently with kits becoming available for slope soarers and semi-scale powered models and at least two designs have featured ducted fan power plants. Construction of the Lightning is slightly different from the others of the Cat-jet group in that the wing halves are constructed separately and then joined onto a partially built fuselage, ie without the top and bottom sheeting attached. Fuselage construction features 3/16 balsa sides and the top access hatch is removable from the front of the cockpit to the rear of the wing trailing edge. A suggested 'split' battery layout is shown on the drawings for 500 mAh cells, smaller capacity batteries would fit under the wings.

Control linkage 'snakes' must be used for aileron operation - this is a one-piece model - elevator control may be from a pushrod or 'snake'. Do ensure that the rear fuselage former is well glued to the fuselage sides and doublers, it takes the full tension of the catapult at the point of launch. From the safety angle the pointed cone is potentially dangerous, it is suggested that the point is given a radius or the cone is made from soft rubber..." 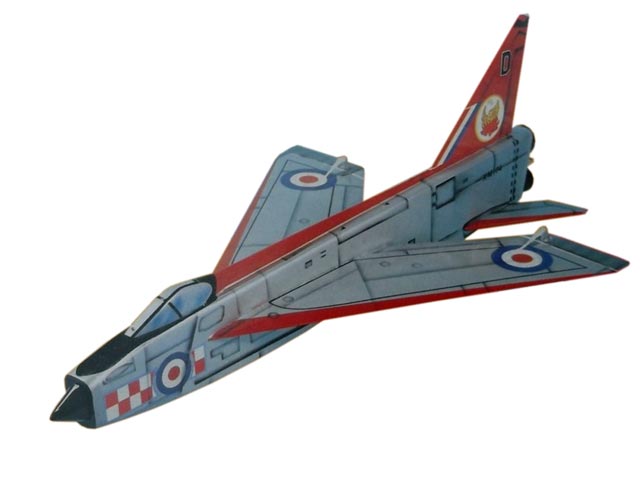