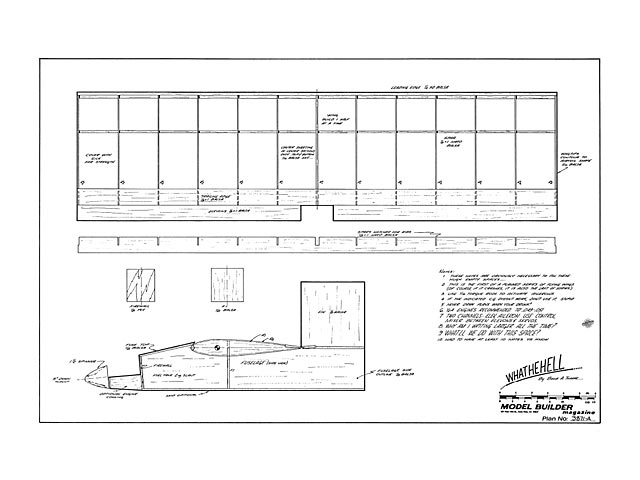 Note the Whathehell and Necromancer (oz12466) plans both appeared in the same article, in MB March 1987.

Quote: "Two half-A A/C designs that share a lot of similarities are the result of the author's late-night imagination. Building is simple, and the flying? Let's just say that it is a blast!

Okay, it's almost midnight. You've been at your drawing board for a few hours now drawing a funny-looking flying wing thing that you're not sure will even fly. All that's left to do is think of a name and write it in the title block so that you can hit the sack. What the hell would you name it?

Aside from the difficult chore of naming these models, I really do like to design model aircraft, especially weird model aircraft. I generally stick to relatively small designs, partly because of my small drawing board, but mostly because it's so easy to experiment with them. Crashing a simple Half-A canard that took two weeks to build is much less painful than seeing a .60-powered one munch it during the first critical seconds of the test flight. The tiny model can be hand launched over a nice, grassy field and if it goes in, it probably won't be broken. If your experiment works, then you build the .60 version.

Well, I really did build a Half-A canard, and it really did crash, and no, I didn't build the big version. That's the beauty of experimentation with small models - you can try virtually any oddball design with a minimum expenditure of time, money, and frustration. And if you're lucky, some of the ships may actually fly!

The Whathehell is a prime example of this technique. I honestly did not know if it would fly or not when the time came to try it. I had designed other flying wings, but they were basically powered gliders (Half-A's, of course) with cambered airfoils and reflexed trailing edges. They flew fine, but I wanted a flying wing with high performance and good stunting capability, much like Bill Evans' Simitar (oz10187) series. His planes use a slightly cambered airfoil with very little reflex. Carrying this a bit further, I went with a symmetrical airfoil and no reflex, but I worried about stability. Would it be controllable? Theoretically, a symmetrical airfoil has neutral stability which should be alright. Besides, it's been done before; I've seen the R/C combat jobs in magazines so it's got to work!

Then I decided ah, what the hell, just build one and see if it flies! I knew that I didn't want to spend too much time on the project which meant it must be as simple as possible. That led to the constant-chord wing and the rather squared-off look that it has. It took about two weeks of sporadic work to finish the Whathehell and get down to business.

A couple of good test glides were encouraging, but not totally conclusive. But the test flight strongly confirmed that it was a winner! All looping and rolling maneuvers, inside and outside, were accom-plished with ease. At 18 ounces, the Whathehell performed well and above my expectations and has been a truly fun plane to fly.

CONSTRUCTION: I simply love to design, and I love to design simply. Ijust can't envision any modeler who feels capable of flying the Whathehell having any troubles during construction. You probably already have enough scrap wood laying around to build it. One change that you may wish to make is eliminating the dihedral and building the wing in one piece. l only put the dihedral in for looks, basically. Modifications to fit per-sonal preferences are, as always, strongly encouraged. You will be happiest only when the model looks the way you want it to look.

FINISHING TOUCHES: The Whathehell can be finished any way that you wish, but some type of plastic covering is recommended to save time and weight. Mine is covered entirely with trans-parent red MonoKote with yellow and black trim MonoKote for the decorations. Mount a hot 049 or .051 securely to the firewall using a commercial engine mount. Install a two-ounce fuel tank as high as possible in the fuselage to get it nearly in line with the needle valve on the engine. I added the 'cat whisker' skids for landing on concrete, but haven't tried it yet.

RADIO INSTALLATION: I won't try to fool you into thinking that the Whathehell has a lot of room for the radio, because it doesn't. If you have a micro system there's no problem, but most of us don't. My four-channel Futaba receiver fit nicely under the two-ounce tank in front of the wing. I also used a 100 mah battery pack to save space and weight. The mixer (I used a Du-Bro) and linkages will take up most of the remaining space. The former will probably have to be cut away quite a bit to clear all the equipment. Try to mount the switch in a spot that won't interfere with hand launches.

FLYING: Get that CG within 1/8 inch of that shown on the plan. Use lead if you have to - this may add a little weight, but it's worth it; trust me. The elevons should be set in a neutral position.

Fire the engine up and have at it. The plane is fast and incredibly responsive so be gentle with the sticks until you have a good feel for it. Try a roll, but be careful! The first time I gave it full aileron for a roll it did about three before I could let go - I was lucky that it was right-side-up when it came out of the stunt! It won't go out of sight roll-ing straight up, but it's pretty spectacular for a Half-A job. When the engine quits, just glide it into a soft landing on the grass.

I think that I have had more fun flying this little bugger than any other RiC plane that I've built. This might be just the perfect plane for you to fly after work at that big field down the street. Or if you normally fly from a grass field you can use it as a quick diversion from your pattern training or scale jobs. And when one of your flying buddies walks over and asks, What the hell is that? you can politely grin and respond, That's right!" 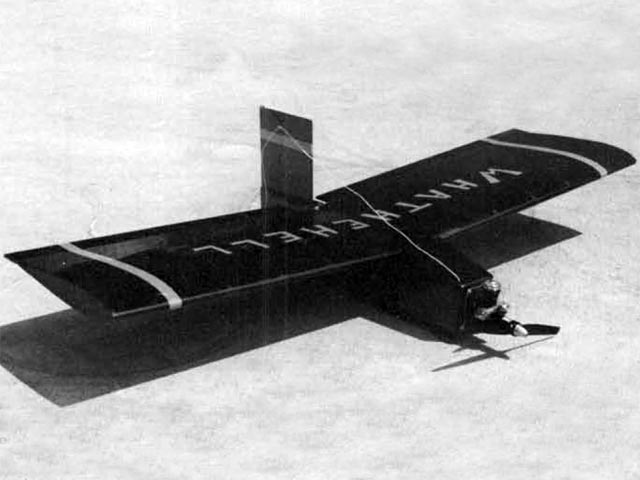