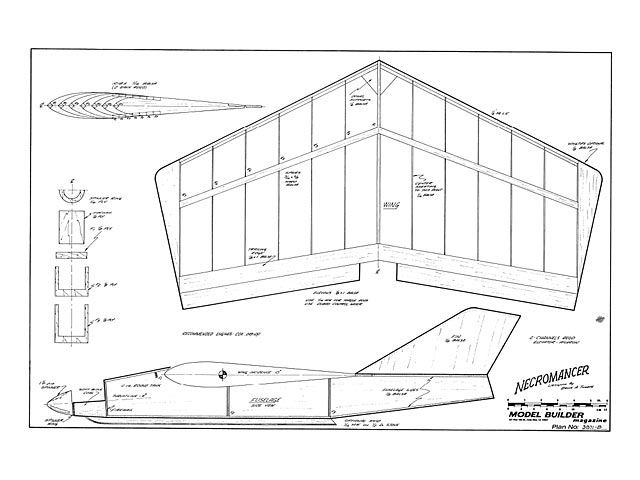 Note the Necromancer and Whathehell (oz12467) plans both appeared in the same article, in MB March 1987.

Quote: "Necromancer is a follow-up design to the Whathehell flying wing. The Whathehell is a great model for flying, but its squarish lines admittedly leave a bit to be desired in terms of appearance. Necromancer was designed for stylish looks while maintaining simplicity.

It had to be simple, because I began the whole project just two weeks before the Northrop Flying Wing Contest. The plans were drawn in two days, but 1 got bogged down in class work and was only able to finish the wing and most of the fuselage. Appearance and ease of construction were placed above performance while designing the Necromancer. I always thought that a tapered, swept wing of short span would look nice on a model, so I tried it. With the engine so far out in front, a long fuselage behind the wing was necessary for balance. The small cowling makes getting to the engine simple, and the spinner com-pletes the sleek look.

It's a bit more work than the Whathehell, but the work that you put into your Necromancer will be instantly repaid the first time you do a low pass down the strip. Its long, tapered fuselage and swept fin really give the impression of high speed, even though it is actually no faster than most sport Half-A's.

Due to its larger size and greater weight (23 oz vs 18 oz), the Necromancer won't perform like the Whathehell few Half-As will). However, it will do anything that can be done with a two-channel aircraft, includ-ing the most beautiful axial rolls that I've seen. The plane is smooth and predictable and most importantly, it has "class!'

I first came across the name Necromancer in Firestarter, a novel by Stephen King. In the story, Necromancer was a beautiful black horse. A dictionary defines a necromancer as 'one who foretells the future through communication with the dead.' Kind of spooky, huh? I tried to maintain the image by painting the fuselage black and adding the little "fire-devils" to the fin.

CONSTRUCTION: The price you pay for building a tapered wing is having to cut out those ribs! I cut them out one at a time, which took a while, but they were accurate and didn't have beveled edges like they would with a stack-and-sand technique. Once this chore is finished, construction is a breeze.

Build the wing halves upside-down over the plans, insuring that the root rib is straight. My Necromancer has dihedral, but the plans now indicate a flat wing. The dihedral actually causes the plane to be overly stable, making inverted flight and outside maneuvers difficult to perform well. You may also want to leave the wing-tips off if you think it will look better. Sheet the center section, then butt-glue the halves together with epoxy. A low aspect ratio wing such as this doesn't need any center braces for strength. Bend torque rods from 1/16 music wire and epoxy them to the elevons. I covered the wing with transparent red MonoKote, then hinged and covered the ailerons at the same time. The wing center section is black MonoKote, and gold MonoKote trim separates the colors.

The box fuselage shouldn't present any problems. The cowl is formed from thick sheets of balsa. Temporarily mount the en-gine to locate the spinner ring. Sand the cowl to shape using the plywood spinner ring as a guide. Glue the fin in place and fin-ish the fuselage as you desire. My fuselage was filled with clear dope and painted black, If you plan to land the model on a concrete runway, be sure to add a hard-wood or music wire skid.

FINISHING TOUCHES: Mount a good TD .049 or .051 in the nose using a commercial engine mount. I use a 6-3 prop with a 1-1/2 inch Goldberg spinner. Use a two-ounce slant tank and pad it well with foam rubber.

The long fuselage leaves plenty of room for the radio equipment. The elevator and aileron servo are both mounted in the wing and mixed using a Du-Bro mixer. My 225 mah battery is mounted well aft for balancing purposes. Be sure that the switch won't interfere while hand-launching - that could be disastrous! Balance the model within 1/4 inch of the balance point shown on the plans. Set the elevons to move 1/8 inch for elevator and 3/16 inch for aileron. Control response will be fast, but predictable at these settings.

FLYING: The nice thing about Half-As is that you can fly them in nearby fields. If you live in an urban area, you can usually find an industrial area with large open spaces. You probably won't be bothered if you fly early in the morning, late in the evening, or on Sundays.

The test flight will be easier if you can find someone to launch the plane while you concentrate on flying. You will find that the Necromancer flies very much like any two-channel ship - but, like I said, that first low pass will be the big payoff. All looping and rolling maneuvers can be accom-plished. Other planes may outperform your Necromancer, but the style and elegance of this bird more than make up for it.

I fear that I may have gone overboard in my enthusiasm for this plane, but the pleas-ure that it has brought clouds my view I honestly believe that if you decide to build a Necromancer; it will be just as enjoyable for you." 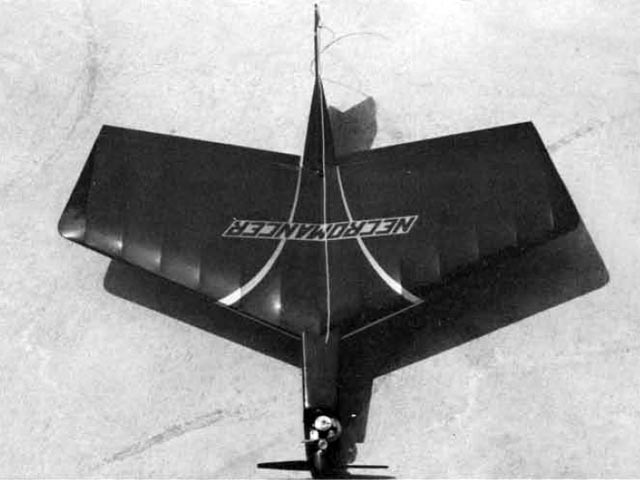